Big Avista-led project to serve as catalyst near East Sprague 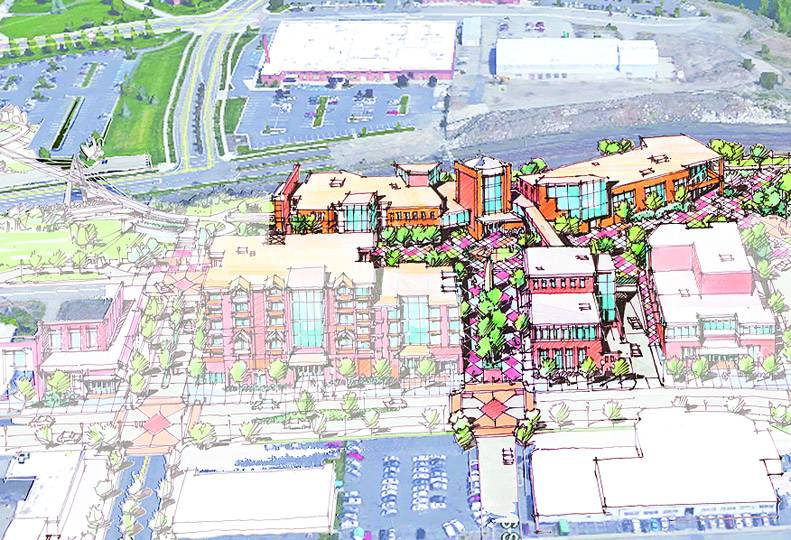 -—Bernardo|Wills Architects PC
Avista Development Inc.’s long-range vision for the Catalyst Project shows several multistory buildings in and around the 5-acre development area north of Sprague Avenue and south of the University District.

An affiliate of Spokane-based energy company Avista Corp. has entered the early land-use planning stage with the city of Spokane for the first phase of an ambitious development concept for the area near the south landing of the soon-to-be constructed University District Gateway Bridge.

The development, to be named the Catalyst Project, would be located on 5 acres of land, most of which Avista Corp. and affiliate Avista Development Inc. own on the north side of the 500 and 600 blocks of east Sprague Avenue, says Latisha Hill, Avista’s senior vice president of development.

Hill declines to estimate the value of the development, but the long-range vision for the Catalyst Project area appears to rival in scope the $45 million, 300,000-square-foot Jensen-Byrd development separately planned by private developers near the north landing of the bridge.

The initial phase of the Catalyst Project would include a 140,000-square-foot building with six above-ground stories and a basement just east of the south bridge landing area, says a predevelopment application filed by Avista Development with the city of Spokane to begin the city’s planning process.

Planned uses for the initial building include laboratories, offices, classrooms, study areas, and some storage, the application says.

A site plan filed with the application shows a similarly sized building is envisioned in a future phase just east of the initial project.

The buildings would overlook the BNSF Railway Co. tracks, which run along the south edge of the Washington State University Spokane campus.

She adds that she hopes construction on the Catalyst Project development will be underway simultaneously with the University District Gateway Bridge project construction, which is expected to start in coming days and to be completed next year.

Jensen Byrd Development LLC has said recently that it expects to begin construction and renovations near the north bridge landing sometime this year.

Hill says, “We want to make sure the multimillion-dollar bridge is equally and beautifully yoked. We don’t want an amazing bridge to land in a gravel lot.”

Bernardo|Wills Architects PC, of Spokane, is working on the preliminary design for the Catalyst Project. Avista hasn’t named a contractor for it.

Though Avista is primarily an energy company, it’s not unusual for the company and its affiliates to work with communities to ensure land uses meet local goals, Hill says.

“Our intention is for this space to drive economic vitality for the region,” she says. “Our goal is to prep the land and to convene the right folks who can deliver the vision that the community has.”

Hill declines to identify the development partners during the predevelopment stage of the Catalyst Project.

“Avista is one of many stakeholders. A lot of different folks are involved,” Hill says. “I think it’s going to be a truly remarkable project because of our partners and what they bring to the table.”

A separate rendering of Avista’s long-range vision for the Catalyst Project area shows at least two other multistory buildings are envisioned along the north side of Sprague.

The predevelopment site plan shows, however, that the future sites for the buildings along Sprague would be developed in the initial phase as parking lots with landscape buffers and street trees.

Avista has owned about an acre of land within the Catalyst Project area since 2008. The company originally had intended to develop for an electrical substation there, Hill says.

“We have heard very loudly from our community partners that they wanted that parcel to have a higher and better use,” she says.

Six buildings constructed between 1939 and 1952 with a total of 47,400 square feet of floor space would be demolished to make room for the Catalyst Project, the predevelopment application says.

The developer also plans to ask the city to vacate undeveloped portions of east Riverside Avenue and north Sheridan Street right of way within the Catalyst Project area, the application says.

The vacated right of way would be developed as a connected pedestrian plaza with emergency-vehicle access.

The plaza also would connect to a separately planned pedestrian-only extension of Sherman Street north of Sprague that would lead directly to the south bridge landing.

The city of Spokane has selected Garco Construction Inc., of Spokane, to construct the $15.4 million landmark bridge that will span Martin Luther King Jr. Way and the BNSF Tracks, providing a pedestrian and bicycle link between the University District and the East Sprague neighborhood.

The 450-foot-long, 120-foot-high bridge also will serve as a highly visible connection between the academic campuses and Spokane’s lower South Hill medical district.