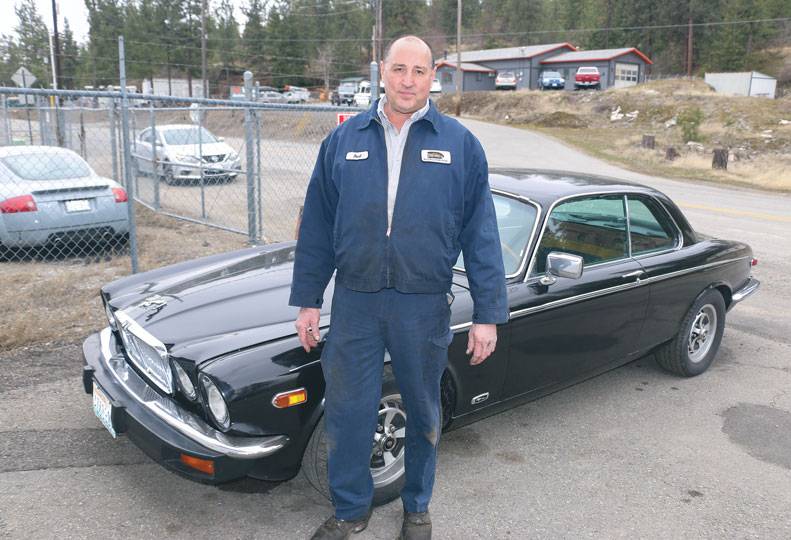 -KEVIN BLOCKER
Botzon’s Automotive owner Bud Botzon specializes in European-built vehicles, such as the Jaguar sedan shown at his shop on a recent afternoon.

Bud Botzon started repairing the bicycles of friends as a child growing up in California. A near lifetime of service continues today as he’s now a Spokane Valley-based mechanic.

Botzon, now 59, acquired the business, formerly known as Leighton Automotive, in 2003. He and his team of three mechanics work on just about all makes of vehicles, although Botzon always has had a personal love of, and an aptitude for, fixing European-built cars.

“If you’re going to be a mechanic, get proficient at the ones that break all the time,” he says.

Botzon says he’s busier right now than at any point he’s owned the shop, and not just because he’s been down one mechanic, who currently is off work due to health issues.

“I don’t have enough manpower to keep up with what’s coming in at me, and I haven’t had the room to increase,” he says.

However, Botzon says he formulated business expansion plans last year, and he intends to carry them through this year.

He currently is seeking a building permit with the city of Spokane Valley, while the city plans to install a water main under the street in front of the business, he says.

His automotive shop currently has 4,000 square feet of work space. Botzon says there’s enough space on the building’s east side to construct a 3,000- to 3,500-square-foot expansion to accommodate those additional service bays and provide room to hire more mechanics.

On a recent weekday, Botzon’s worked on a German-made Audi SUV next to a British-made Land Rover. Botzon estimates the work on those vehicles combined will be worth $4,000.

“I’d say we particularly specialize in old British models,” he says. “That’s always been kind of my thing working on older stuff.”

The 1984 Rolls Royce Silver Spur model sedan brought into the shop earlier in the day is a testimony to that.

Leighton Automotive also serviced such vehicles, which made the idea of acquiring the shop from the former owner appeal to Botzon. He says he retained Leighton’s lead mechanic, who still works for him.

“With his expertise, we just kept doing the old British stuff,” he says.

European-build vehicles can be challenging to service, in part because it’s harder to obtain parts for them than for domestic vehicles, he contends.

“I get a brake job on a (Dodge) Caravan, I call the brake store, they show up in five minutes, and the car leaves that day,” he says. “If I get a (19)40-something MG TD, it could be weeks to get that brake job done.”

Botzon characterizes many British-made vehicles as being “a little overdone” in that they historically have more parts than Japanese-made and U.S.-made vehicles.

“Not all of them though – some of them are really simplistic,” he adds. “Almost as simplistic as an air-cooled (Volkswagen) Bug.”

Botzon was born in Spokane before his parents moved the family to Sacramento, California. They then returned to Spokane in 1983, he says.

If Botzon has his way, he will retire at 62 but retain ownership of the business.

“I just won’t be doing this anymore,” says Botzon, who displays his pair of scarred and worn hands that clearly reflect decades of being underneath car hoods and chassis.

“I’ve always been mechanically inclined, and I’ve just always loved cars,” he says. “I like cars. I like people and fixing problems.