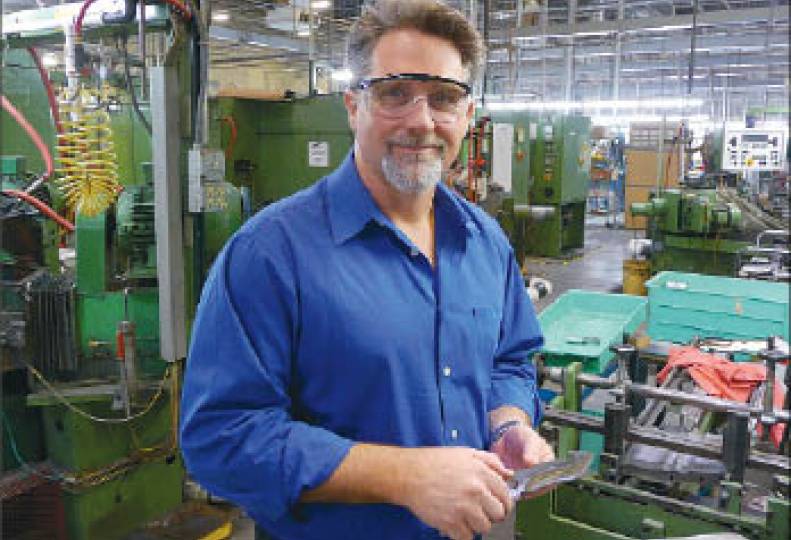 -—Staff photo by David Cole
C.J. Buck, CEO and president of Buck Knives Inc., says the company now makes knives one at a time, reducing the amount of time the products spend on the factory floor.

POST FALLS—Bucking a familiar trend in the manufacturing sector, knife maker Buck Knives Inc. says it has been bringing back to its plant here some of the production that it had been contracting out to Chinese manufacturers in recent years.

The shift, made possible partly by plant efficiencies it has made here and triggered by a desire by both its owners and many of its customers for its knives to be U.S.-made, has been under way for months, says C. J. Buck, its president and CEO.

"The good news is manufacturing is absolutely viable in the United States," says Buck. "We're a good example of that."

As recently as three or four years ago, Buck Knives was importing from Chinese contract manufacturers about 50 percent of its knives, he says, adding that today, that percentage is 30 percent to 35 percent. The company's knives are sold all over the world.

Buck Knives plans to increase domestic production by 20 percent this year, and recently hired 10 people to work on its manufacturing floor in Post Falls.

Buck Knives moved to Post Falls in 2005 from El Cajon, Calif., near San Diego. Its 120,000-square-foot Post Falls plant is located at 660 S. Lochsa St., and currently employs 220 people, Buck says. He declines to say what its annual sales have been, not wanting competitors to have the information.

He says one of the reasons Buck Knives had to outsource so much of its production stemmed from the company's relocation from Southern California, which he describes as a massive undertaking that used the majority of its internal resources for almost two years. As part of the transition strategy, the company began to outsource to China manufacturing of its newest products because its engineering staff was so busy training new factory workers in Post Falls, Buck says.

"It's all based around the relocation," he says. "That's what prompted a surge in imports, and now that we're stable in our new factory, it's coming back to our more normal model."

Still, he says, some manufacturing will continue in China, because the price point on some of the knives the company offers doesn't allow it to make them here.

"Only China, right now, is still able to land (at the shipping dock) a product for 20 percent, sometimes 30 percent, less than we can build it," he says. "Oftentimes, China can land a product for less than our cost of our materials."

Because the knives the company imports from China are lower-priced models, only about 25 percent of Buck Knives' overall knife sales, in dollar volume, are of products imported from China, compared with about 40 percent just two to three years ago, Buck says.

Although the majority of the company's sales during the transition period continued to be from U.S.-made products, the importing of knives didn't sit well with the Buck-family tradition, nor did it go over well with some longtime customers.

"We have fielded many complaints about our decision to import products, even though we were clearly focused on offering the same high quality," says Buck. The company backs its imported products with the same lifetime warranty it offers on knives it makes here.

"It has become apparent that Buck Knives is held to a different standard" than other U.S. manufacturers, he says.

Buck Knives began to look at implementing lean manufacturing principles even before it moved to Post Falls from Southern California. The company made that decision in late 2001, after it was stung by a big drop in sales following the terrorist attacks of September that year, Buck says.

The company, like other cutlery businesses, brings in about 50 percent of its business in the last four months of each year, he says.

The company had to make a choice, he says. Either it could become just a marketing company that sold knives made in other countries, or it could change its manufacturing approach and continue to make knives itself.

To remain a manufacturing company, Buck says, the company needed to reduce its costs, and one significant way to do that was to get out of California, where high energy and labor costs were cutting into its margin. He adds that the political and government atmosphere in California wasn't business-friendly enough, either.

Idaho, the owners expected, would be different, and it was, he says.

"We have made a ton of changes," Buck says. "Now we are letting them be realized."

In the past, the company had made knives in large batches, using a traditional assembly-line process, and it took four to six weeks for the knives to completely travel the line. Now, it makes knives one at a time, in circular manufacturing cells that take up a fraction of the space the old assembly line did in California before the company began to adopt lean manufacturing. In fact, Buck Knives' Post Falls plant has 30 percent less manufacturing space than the one it operated in El Cajon, Buck says.

That change reduced the amount of time it takes to produce a knife, and also enabled Buck Knives to shift production from one product to another far more easily, says Phil Duckett, the company's chief operating officer.

"When the need arises, we can quickly switch our manufacturing cells from making one model to another," Duckett says. "Our ability to respond to customers' orders for products we do not have in inventory has resulted in consistently high marks for shipping our customers' orders on time and complete. You can see the great advantage it gives us over competition (that's) still processing products the way we used to do it."

He adds, "You strive for velocity. You need to convert the raw materials into a salable product as quickly and as efficiently as possible."

He says the lean manufacturing efforts ultimately have made it possible for the company to make more knives here rather than having them made by Chinese contract manufacturers.

The changes, Buck says, have made for happy customers, too. He says he's had dealers tell him lately that Buck Knives "is the smoothest vendor to deal with."

Dealers have to maintain less inventory, because Buck Knives can resupply them faster, he says.

"We're responsive, we ship fast, and we ship complete," Buck says. "If I can be more responsive to customers, customers are going to start pushing more business my way, and away from the people that they have to work harder on. The key is to ship complete and on time."

Buck asserts that customers now will push business his way, even if they might pay a little more, because they like the company's flexibility and responsiveness. "Customers don't want to take a risk and get stuck with too much inventory or have back orders," he says.

Although the lean manufacturing efforts have been successful, Buck Knives still must do business in an economy that is weakened by recession and lower consumer spending.

The fourth quarter of last year was incredibly difficult, with sales down from the previous year by about 25 percent to 30 percent, Buck says.

He says the company is planning for a "similarly compressed" sales year this year.

"We're planning on it being worse, even though we expect it to be better," Buck says.

The recent hires, for instance, were added after a stronger than expected first quarter, he says.