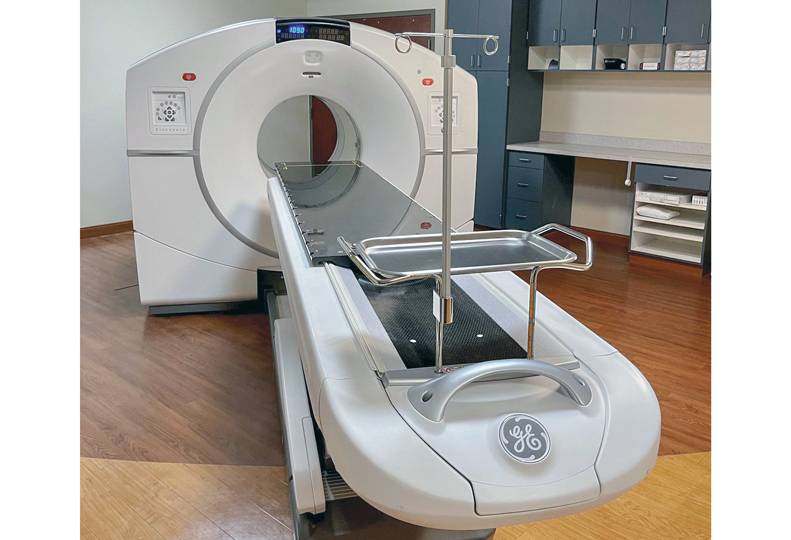 -CCNW
Cancer Care Northwest has eight offices in total: four in Spokane and one each in Spokane Valley, Coeur d’Alene, Post Falls, and Moscow.

Simmons claims Cancer Care Northwest is the first health care facility to offer the scan using the radiotracer Axumin in Eastern Washington, adding that it previously has been available only in larger Pacific Northwest cities, such as Seattle and Portland.

The scan uses positron emission tomography and computed tomography—better known as PET and CT scans—with Axumin, an amino acid radiotracer that is injected into a patient, she says.

Axumin, also known as fluciclovine F 18, accumulates more in cancerous areas of the body and concentrations of it can be identified through PET/CT scans, she says.

Simmons says Axumin scans can aid in the search for prostate cancer in both soft tissue and bones.

“We can see spread to lymph nodes or the skeleton, which is just not something other tracers would be specific for,” she says.

Axumin scanning has been available since Aug. 17 at the practice’s south Spokane clinic, at 601 S. Sherman, she says. As of Aug. 27, a handful of patients have undergone the procedure.

For the past year, Cancer Care Northwest patients had been referred to Seattle to get the scan, says Dr. Christopher Lee, a radiation oncologist with the practice. Having access in Eastern Washington opens Axumin up to people who would prefer not to travel or don’t have the means to do so.

Axumin scans, which typically are covered by insurance, potentially can catch prostate cancer recurrence much earlier than other PET, CT, and bone scans, Lee contends.

Such scans can determine where prostate cancer has recurred within the body even if prostate-specific antigen levels are lower than 10.0, even lower than 1.0 in some cases.

Typical imaging for prostate cancer usually picks up the cancer when PSA levels are between 10 and 30 or higher, he says.

According to the National Cancer Institute, prostate-specific antigen is a protein produced by the prostate gland. Test results of PSA levels are typically reported in nanograms per milliliter of blood.

“This is an improved test, with a much higher sensitivity, that can give us, at an earlier time point, information where the cancer is coming back, so that we can target it specifically,” he says.

Simmons says the procedure for the Axumin PET/CT scans is a bit different than other, more common PET scans.

Often, when a patient comes in for the more common fluorodeoxyglucose, or FDG, PET scan, he needs to wait roughly 45 minutes to an hour before he can be scanned, says Simmons. With the Axumin scan, however, the patient already is on the table when injected and only waits four minutes before being scanned.

“(Axumin) is quite a bit different in how it accumulates. It doesn’t need the pickup time that some of the other tracers need,” she says.

About one in seven men will develop prostate cancer, and about one-third of those who develop it will experience recurrence, says Lee. Axumin is just one of several new agents in the works for prostate patients. Several other tools are being studied as well, he says. However, bringing many of those new technologies into clinical settings can be a slow process.

Axumin, for example, was approved by the FDA in May 2016 and is just coming to the Spokane area. It’s currently only approved for patients who have previously received treatment for prostate cancer and are seeing a rise in PSA levels again, says Lee.

“There are other tools and technologies that are, in the future, going to be able to find where the cancer is located and treat it with precision,” he says.

Cancer Care Northwest has operated in the Spokane area for more than 40 years, says Simmons. The oncology practice consists of more than 30 physicians and operates eight clinics throughout Eastern Washington and northern Idaho. That includes four clinics in Spokane, one in Spokane Valley, and one clinic each in Coeur d’Alene, Post Falls, and Moscow.

The practice offers chemotherapy, diagnostic imaging, physician services, radiation, and access to other support, such as registered dieticians and social services.