Large projects likely will continue into next year 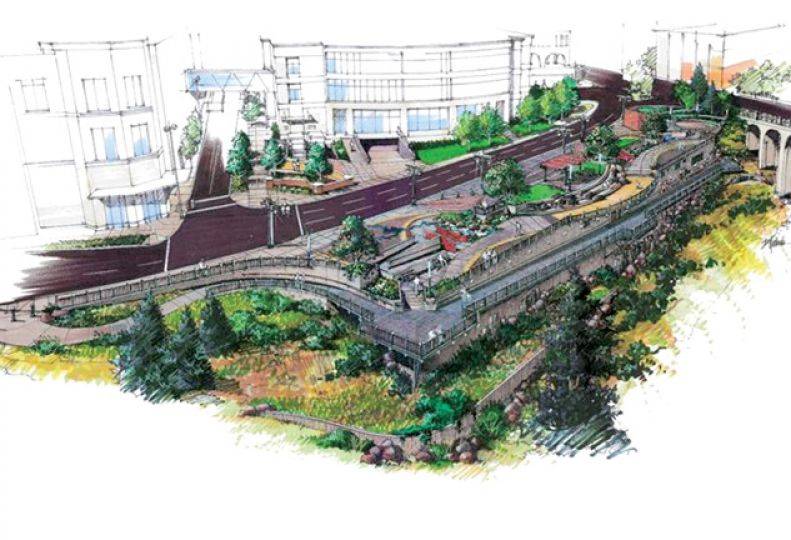 -—Bernardo|Wills Architects PC
A $20 million combined sewer overflow tank is being installed along Spokane Falls Boulevard. Garco Construction Inc., of Spokane, is expected to complete that project in early 2019. The image above shows what the site is expected to look like when finished.

Marlene Feist, spokeswoman for the city of Spokane’s utilities department, says the city plans to begin construction this year on combined sewer overflow projects valued at about $8.6 million.

“This is the last of the CSO projects, so we’re winding down this year,” says Feist “The winter has been relatively mild, so we’ve been able to continue construction over the winter months.”

Feist says the city will begin three new CSO tank projects valued at about $8.6 million, while also continuing work on six others totaling about $70 million.

The CSO tank projects are all part of the city’s Integrated Clean Water Plan, which prioritizes projects based on their positive environmental impact to the river.

Feist says the first of the new projects is set to start this spring under a $1.4 million contract, awarded to Spokane Valley-based N.A. Degerstrom Inc. The project includes the installation of two tanks near the Kendall Yards neighborhood, a 38,000-gallon tank at site along Bridge Avenue between Ash and Oak streets, and a 13,000-gallon tank at Cedar Street and Summit Parkway. Although the project has no set time line yet, Feist says it’s expected to be completed later this summer.

Feist says the second new project, also starting this spring, is a $3.7 million contract, awarded to Spokane-based Halme Construction. This project will take place in the Peaceful Valley area, along Main Avenue between Monroe to Cedar streets, and is expected to be completed later this fall.

“Because there isn’t as great a need for storage in this area and the terrain is a bit challenging, this project is more about installing good piping connections rather than a tank,” she says.

As part of the project, Feist says the one-lane section of roadway where Main moves downhill to meet Cedar will be made into a one-way street leading west, and a nearby rock wall also will be rebuilt.

“These swales provide a place for water to go, but also support surface treatments like tree wells and sidewalks, which we feel helps add amenities in residential areas,” she says.

Feist estimates about 67 individual swales will be installed as part of the project, with the locations of each being based on geographic factors, and the volume of water that needs to be held in each area.

As for continuing projects, Feist says this summer the city will complete installation of a 2 million gallon CSO tank west of Liberty Park, where Third Avenue passes under Interstate 90. The $9.6 million project, awarded to Halme Construction, got underway last April.

Feist says two other projects, a 1.5-million gallon tank at east Riverside Avenue and north Lee Street, and a 200,000-gallon tank at Riverside and north Napa Street, which both began last September, also are expected to be finished this fall. She says the projects, valued at $13 million and $2.8 million, respectively, were bid together and awarded to Spokane-based Max J Kuney Co.

One more project also set to wrap up this fall is the installation of a 1.4-million gallon tank near Northwest Boulevard and T.J. Meenach Drive, in northwest Spokane, says Feist. The $7.9 million project was awarded to Spokane-based Clearwater Construction & Management LLC, and construction started last May.

With two other large tank projects, construction started last spring and will be continuing this year, although neither is expected to be completed until early 2019.