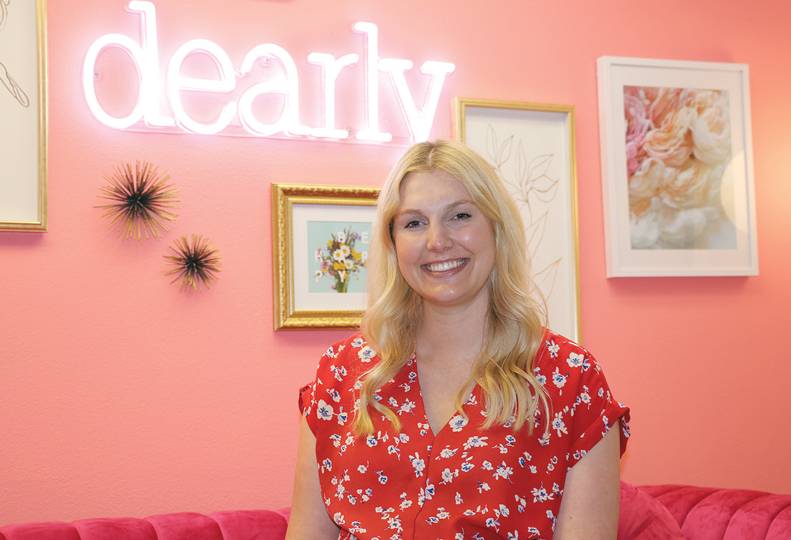 Maybe Cassie Cleary will slow down a bit. Or, maybe she won’t.

After she debuted Honest in Ivory Bridal Shop in 2018, on June 3, she unveiled her latest creation: Dearly Consignment Shop. The two stores are side-by-side at 1003 E. Trent, suite 105, part of the historic Riverwalk Building in Spokane’s University District.

Honest in Ivory has won The Knot and Wedding Wire awards for best bridal shop in Spokane both this year and last.

Cleary, 28, says she’s confident Dearly Consignment will have a successful debut despite launching in the midst of a global pandemic. While weddings have been rescheduled, COVID-19 hasn’t stopped people from getting married, she says.

“Now, more than ever, brides are looking for elopements as well as designer gowns on a budget,” Cleary says.

For the last couple of years, Cleary has returned from Bridal Fashion Week in New York with designer-brand wedding dresses. Dearly Consignment now has them marked down anywhere from 30% to 60% below original prices. Dress prices can range from $500 to $2,500, she says.

“Right now, you can have up to a four-month wait before securing your own dress,” she says. “It wasn’t at all planned to launch this business during a pandemic, but the timing feels just about perfect.”

Cleary announced Dearly Consignment on social medial channels on May 1, which immediately generated 50 bookings for fittings.

She describes both businesses as being for nontraditional brides who “don’t subscribe” to the “stressful and over-the-top” experience of wedding dress shopping.

As Honest in Ivory approaches its two-year mark of operating, Cleary now has three full-time and eight part-time employees.

In addition to running both businesses, she works 20 hours a week at Stepping Stones Pediatric Therapy PLLC. And if that weren’t enough, the day she opened Dearly Consignment, she clocked out early in the day – 2 p.m. – in preparation for the birth of her first child.

“I still love both jobs and don’t really see the need to give either of them up,” she says.

Speaking of the Riverwalk Building, Hayley Lydig says she just signed a lease to occupy a suite there to start a second business, this one to be called Pop Balloon Bar.

Lydig, who graduated from Mead High School with Cleary, is an events planner through her company Hayley Lydig Events Inc.

She says Pop Balloon Bar will specialize in creating balloon bouquets and garlands for occasions such as larger birthday parties and weddings.

Pop will be located across the hallway from Dry Fly Distilling Inc. The approximately 1,000-square-foot suite once was occupied by a medical office supply company, she says.

Lydig has been consulting with Michelle Duncan, a co-owner of Party Palace, located at 2607 N. Division, who recently disclosed that she and her husband, Dan, were liquidating their operation.

Lydig says Pop Balloon Bar will only carry balloons, and not the array of accessories, costumes, and other knick-knacks that Party Palace sold.

“My specialty is on-site installation at the location where you want to host your party,” she says. Pop will cater more to personal and private events, not the larger functions that her other business hosts.

That two-year-old business caters to several of the region’s nonprofits for their functions, she says.

Lydig has targeted August for a soft opening and hopes to have Pop up and running starting Sept. 1, she says.

Craig Barnett, who owns and operates The Comic Book Shop, at 3207 N. Division, still plans to relocate the store to 1402 N. Division, in that building’s A suite.

He hopes to be able to have access to the new 3,500-square-foot space as soon as possible.

“I’m hoping we can be in there in another month-and-a-half,” Barnett says.

Barnett debuted The Comic Book Shop to Spokane on July 1, 1988, at 1 E. Boone, near what will be his new location.

“It was in about 650 square feet and a part of Walker’s Furniture,” he says.

Barnett says the new building will be the eighth different address his business has had. Each move is generated by the need for more space.

The new site will have in-store gaming and will be able to host more Dungeons & Dragons tournaments.

Barnett has another North Side store, located in NorthTown Mall, and a third in Spokane Valley, in suite B at 11510 E. Sprague, near the intersection of Sprague Avenue and Bowdish Road.