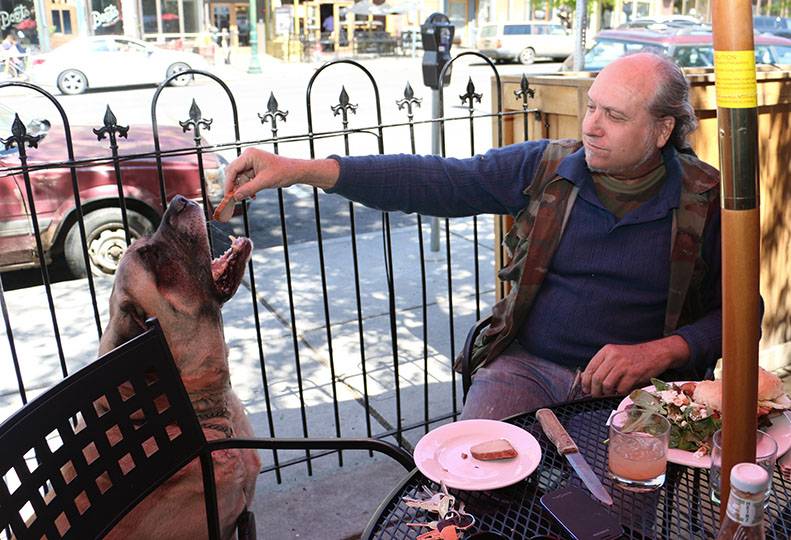 -—Judith Spitzer
John Loehne stopped to have lunch at Saranac Public House at 21 W. Main with his dog Nellie.

You know that downtown Spokane area west of Division that doesn’t have a name?

It’s called everything from the East End to the Community Block to the east end of West Main—depending on who’s talking.

Businesses on West Main seem to be ground zero for what has been explosive growth in the past five years in the area bordered roughly by Spokane Falls Boulevard on the north, Sprague Avenue on the south, Pine Street to the east, and Bernard Street to the west.

Five years ago, the neighborhood seemed to consist of a few bars, the Magic Lantern Theater, Revival Lighting LLC, and Finders Keepers Boutique.

While the growth most certainly has been incited by Walt and Karen Worthy’s $135 million, 716-room Davenport Grand Hotel, at 333 W. Spokane Falls Blvd., across the street from the Convention Center and its new expansion, at least one business owner says the neighborhood has caught fire.

Today, on a bright and sunny Thursday afternoon in mid-May, new restaurants, bars, retailers, coffee shops and a plethora of other businesses have moved into the scene. People are out walking, shopping, and sipping drinks on one of four patios in a one-block area on west Main Avenue.

At the center of it all, at 19 W. Main, an indoor mall called Saranac Commons, reminiscent of those in European communities, opened in April. In about 7,000 square feet, the building now houses a funky common space with exposed brick and open ceilings adorned by a local artist’s rendition of the Spokane River made of 1,500 old bottles dug up from the river.

The space is home to Mediterrano, a Mediterranean restaurant, and Caffe Affogato, an Italian-inspired coffee, tea, and ice cream shop owned by Sharo Nikfar, a local radio host, and both are located at the building’s entrance.

Further back in the space is Common Crumb Bakery LLC, a new bakery and chocolatier owned by Santé Restaurant & Charcuterie owner Jeremy Hansen, and the Black Label Brewing Co. brewery and tap house.

Saranac Commons anchors the block facing Boots Bakery at 24 W. Main, next to Zola, a bar and restaurant that changed hands three years ago and is owned now by Steve and Kim Coombs. The Main Market Co-op sits at the northeast corner of Main Avenue and Browne Street.

The property Main Market sits on was purchased in 2006 by Jim Sheehan, a well-known entrepreneur and retired assistant public defender, who also owns the nearby Community Building, at 35 W. Main, and the former Saranac Hotel building, at 25 W. Main.

The Community Building houses an assembly of nonprofits, led by the Center for Justice, also founded by Sheehan, who says the roots for the new Saranac Commons lie in his vision for the West Main area as a community.

“We’re probably one of the major reasons for the revitalization of the east end of downtown,” Sheehan says. “And a lot of that has to do with the synergy here. We’ve been instrumental in creating a different vision for the community,” he says, referring to the tenants in the buildings he owns.

Sheehan says a waiting list for space in the buildings demonstrates how much people like the aesthetic that has been created. “And we give them a good rate,” he adds.

“When you’re spending one third of your life in the workplace, you don’t want a place that’s soul-sucking. Beauty creates a positive atmosphere, and we feel what we do is really a gift to Spokane in so many ways,” he says.

People are creating and making a living in the spaces on West Main, he says, and in the process are becoming successful.

“People have to make a living, but they’re here because they want to be here in Spokane,” he says. “They’re trying to do something that’s soul-enhancing.”

Farther down Main Avenue, Dena Kieffer, co-owner of Roost, a vintage goods store at 7 W. Main, says five years ago, when she opened the store, she didn’t really feel safe leaving at 6 p.m. in the winter when it was still dark. She says she felt alone and vulnerable because of the transient population in that end of the city at the time.

“There were only a few businesses in that end of town when I moved down there,” Kieffer says.

Today there are people everywhere, day and night, she says.

“This area has an incredible vibe,” she adds. “We could not have a better location.”

Kieffer says foot traffic at Roost has grown tremendously over the past couple of years.

On nearby Division Street, a new bar and restaurant, called the Globe Bar & Kitchen, has opened in the space of the former Globe Bar & Grille, which closed in 2012 and had different owners.

James Fountain co-owns the Globe with Ryan Bates and Dianna Dahlgren, and Fountain also owns the Blind Buck, a nightclub dressed out in speak-easy décor, which opened last year next door to the Globe.

Down the street, arguably one of the oldest businesses in the area is Sport N Spoke, at 212 N. Division, owned by two brothers, Rob and Dave Breidenbach, who have been in business since 1978.

Dave Breidenbach says growth has gone wild during the past 10 years.

“This area is really a hot spot at night now,” Breidenbach says.

Across Division from the bicycle shop, where the U-District rises in the background, is Fast Eddies, at 1 W. Spokane Falls Boulevard, the longtime Spokane nightspot owned by Jeremy Tangen.

Tangen, who also owns Borracho Tacos & Tequileria nearby on the northwest corner of Main and Division, says he sees more and more students from the U-District.

“During the day, it’s an older clientele,” Tangen says. “As night rolls around, we get a younger crowd.”

He says he opened Borracho because people don’t have to leave the area and drive to other bars since they’re close together.

“Lots of people in the area are coming up with ideas. We want to make it an area that attracts both residents of Spokane and tourists.”

On the north side of Main Avenue, mainstay businesses Revival Lighting LLC and Finders Keepers sit adjacent to a yoga studio.

Next door, at 22 W. Main is the bar and restaurant called Zola. Steve and Kim Coombs purchased the seven-year old business three years ago. Kim Coombs says she and her husband frequented the bar, so when it came up for sale, they jumped in with both feet.

Kim Coombs says the area is a melting pot, as are their customers.

“We get college kids as well as people in their 30s, 40s, and up,” she says, adding, “We have a full music venue and we serve lunch and dinner.”

She says most of the business owners in that area are excited and optimistic about the future.

“Everyone wants to get the area all tuned up and pretty,” she says. “Now we have boutique-type shops down here as well,” she says.

Coombs says they’ve watched as the Saranac Community Building was revamped, and Boots Bakery opened next door and starting selling gluten-free food, coffee, and drinks. Boots Bakery occupies 1,200 square feet of space in the former Rocket Bakery location at 24 W. Main and has a seating capacity of 45 people inside, plus a small patio outside.

“We would love to have an identity down here,” Coombs says. “Are we a district? Are we a village? Walt Worthy invested back in the community. He didn’t have to do that and we’ve all benefited,” she adds.

On a recent Thursday afternoon, two longtime local residents Deborah Walker and John Loehne stopped to have a leisurely lunch on the patio at Saranac Public House, across the street at 21 W. Main. The two friends, joined by Loehne’s pure-bred, 200-plus pound English Mastiff, Nellie, say they love spending part of a day on West Main.

Business owners in the area say they want to collaborate to promote the area, including Zola’s owners who are currently working to put together a business owners’ group.

“We’ve been looking at the possible use of parking revenue to use for enhancements in that area,” Richard says. “We’ve planned on putting that forward to City Council and that plan will include improved signage, landscaping and power for lighting trees on Main from Howard to Washington Street, west of the epicenter of the West Main activity.

Richard says the city’s parking advisory committee, which advises the Council on the use of parking meter revenue in downtown Spokane, has recommended using parking meter funds to help pay for several projects in the downtown core.

Those projects include improving the traffic triangle on Division and Spokane Falls Boulevard, and enhancements on the one block of Main Avenue where the Saranac Commons is located.

Improvements on that block include the addition of angle parking for one side Main Street from Pine Street to Bernard, and new pedestrian lighting and new landscaping, as well as seating and bike parking on sidewalks in the same general area.

“This particular area was chosen for its wonderfully unique character and number of foot traffic businesses,” Richard says. He adds that the DSP is interested in talking with business owners to find out how they feel about joining the Downtown Spokane Business Improvement District. “We don’t know whether the City Council will push the neighborhood discussion. That’s not something we would drive, but we’re interested in having the community discuss their needs.”

Inga Note, senior traffic engineer for the city, says the city will be working on some of those projects over the summer. One of those projects targeting the area will add a buffered bicycle lane on Main Avenue from Pine Street to Howard as well as bikes lanes on Spokane Falls Boulevard from Browne to Lincoln streets. Another project will be adding a bump out of curbs at West Main and Division Street.