Estimated $440 million in construction projects on hold in Spokane area 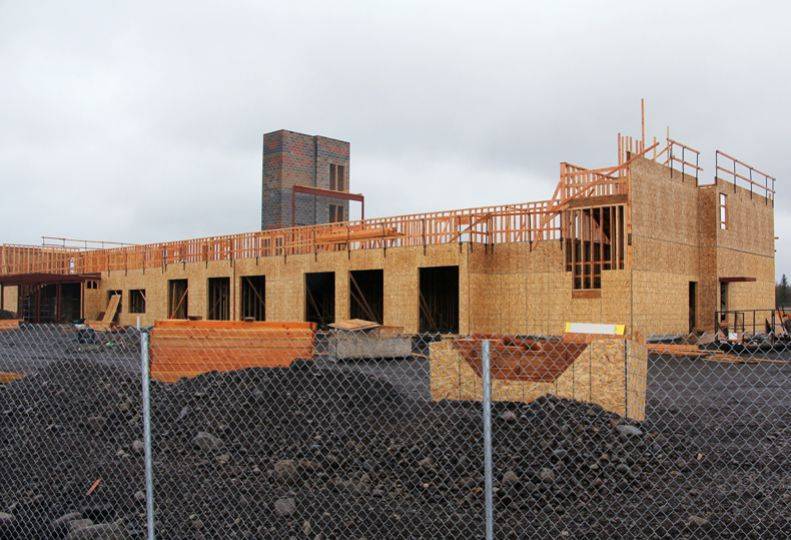 -Natasha Nellis
Work has halted temporarily on the 43,000-square-foot, 92-unit Tru by Hilton hotel at the northeast corner of Mirabeau Parkway and Mansfield Road, in Spokane Valley. It’s one of dozens of projects on hold as a result of the statewide “Stay Home” order.

Inslee’s order, issued on March 23, was set to expire April 6, but he extended it to May 4 in an effort to slow the COVID-19 outbreak.

Spokane Home Builders Association executive officer Joel White says while he hasn’t compiled data to show exactly how many residential projects have been halted, permitting activity is a good indicator of the scope of the impact.

By that measure, data from the city of Spokane and Spokane County shows 2,259 commercial projects valued at $190.3 million were permitted within the last 12 months and likely were in progress when the shutdown was enacted.

Some homebuilders are still working, White adds, as the governor’s mandate included a provision that builders can work up till the project meets the three S’s, he says, which are safety, security, and spoilage.

That means crews can work to cover any existing safety concerns, such as covering rebar or stabilizing a wall, securing a site and materials to prevent theft, and weather sealing to prevent material damages or spoilage, White says. Once those three factors are met, builders are expected to halt work at the site.

The construction industry accounts for over 10% of the region’s gross domestic product, White says, and the shutdown impacts over 10,000 workers involved in the industry.

“We’re hopefully going to be the spear that leads us out of the recession,” says White. “Housing traditionally has been that first growth, and our guys will be ready to go when the order is lifted, but there’s going to be some pain.”

The biggest immediate concern, White says, is the number of homeowners who had purchased a new house that was under construction and were expecting to move in within the next 30 to 60 days and have already sold their existing homes.

The Spokane County Board of Commissioners submitted a letter to Gov. Inslee on April 7 requesting he reconsider the moratorium on the construction of single-family homes. In the letter, the commissioners assert there’s a significant need for affordable housing in the county, and that the moratorium will further increase the affordability gap in the community.

The letter also notes that residential construction is considered as essential critical infrastructure work on the Department of Homeland Security’s advisory memo on essential businesses during the COVID-19 outbreak.

Idaho Gov. Brad Little issued a stay-home order on March 25 and included commercial and residential construction on the list of essential industries.

Washington is one of only four states to have included residential and commercial construction as nonessential.

Inslee’s mandate includes a provision that local jurisdictions can determine what public work is considered essential.

“There’s a lot of confusion,” Stewart says. “Who makes that call whether or not you’re essential? A big concern we have right now is with our suppliers and contractors.”

Marlene Feist, public works director for the city of Spokane, says via email that the city is still determining which of its projects will continue during the order, adding, “We are committed to getting as much work done as possible because we believe strongly that public construction is needed to help with the economic recovery.”

The city of Spokane is still processing, permitting, and inspecting private projects, though inspections are on a case-by-case basis. A building and planning department representative says it is up to project owners and contractors to determine if their project is essential, in terms of moving forward with the permitting process.

The Washington state Department of Transportation amended its March 26 announcement to reflect the extension and states in a press release it will continue the suspension of its construction projects and “will limit maintenance work to all but essential duties through May 4.”

Crews are working on the $12.5 million Wilson Elementary School classroom addition and gym replacement on Spokane’s South Hill, as well as on the $23.5 million Lewis & Clark High School addition. Groundwork also has started on the district’s $43.5 million Glover Middle School replacement and its $70 million Shaw Middle School and On Track Academy project.

“The social distancing in the workplace has seemed to have slowed a little bit of the construction work, but it’s not highly impactful,” to the overall expected timeline, says Forsyth.

Barry Baker, president and CEO of Spokane-based Baker Construction & Development Inc., says the company currently is running about 30% of its contracted projects.

“Most of our stuff is private work, so a lot of those projects have been put on hold,” he says.

Work on the company’s Idaho projects is continuing, he says, and a team is working on completing a financial institution project in Oregon, which has also deemed some commercial construction essential. The company only has a few projects in Washington state considered essential, he says.

“We’re anxious to get revved up again. We’ve got a lot of work on the books,” Baker says.

Baker estimates about $20 million in projects are currently on hold at Baker Construction. The company currently has about 65 employees and has applied to the Small Business Administration for an employee payroll protection loan, he says.

He adds, “We just got kind of a shock. It’s like getting in a car accident. You don’t know it’s coming, and you get hit, and then you have to respond to it. It has a definite beginning, a middle, and an end. We just don’t know where the end is yet.”

Baker says he would like to see the company return to full capacity within a month of nonessential business closures being lifted. Barring full lift of such restrictions, he says he’d like to see at least a partial phaseout of restrictions to allow some industries shutdown by the mandate to resume normal operations.