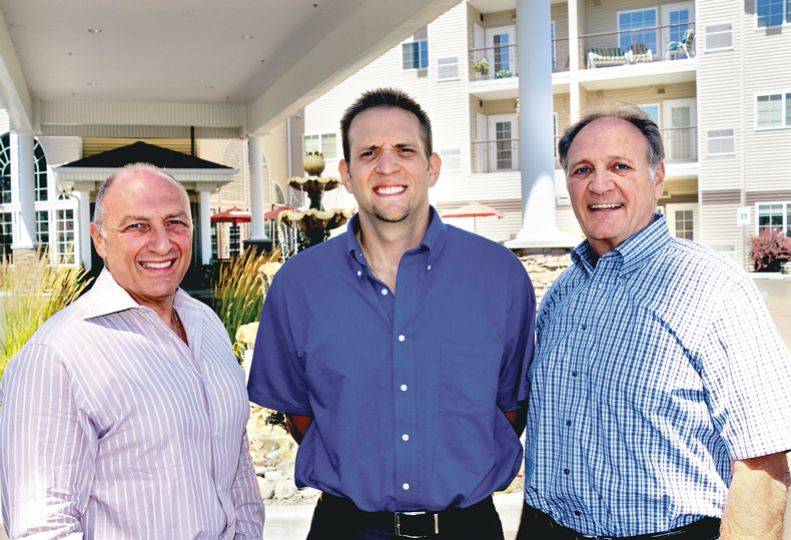 -—LeAnn Bjerken
Evergreen Fountains LLC principals, from left, Prokey Arger, Gene Arger, and Greg Arger say the planned expansion at the Spokane Valley retirement center is underway and is expected to be completed by June of 2018. 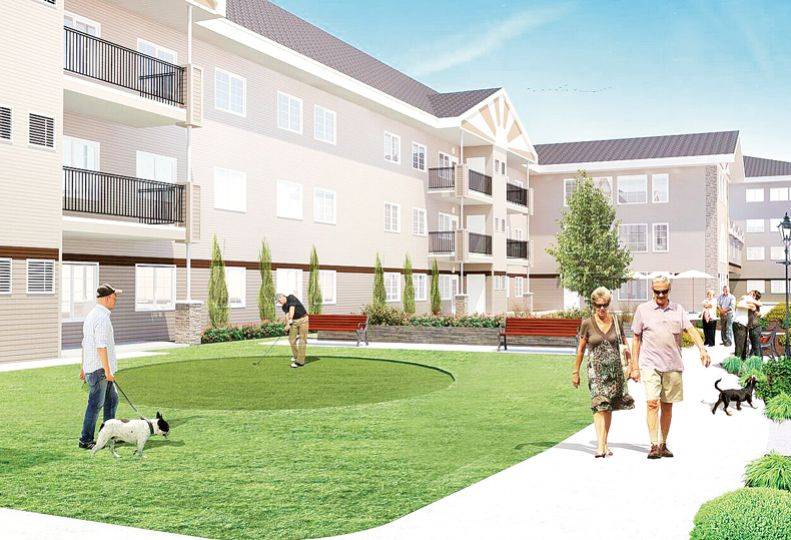 -—Katerra Inc.
The addition to Evergreen Fountains will include 39 living units, as well as a juice bar, game room, garages, and wellness amenities. Cottage-style homes will be constructed as part of the expansion, which is valued at about $8 million.

Evergreen Fountains LLC, a senior living complex in Spokane Valley, has broken ground on an $8 million facility expansion that its owners say will bring additional space and amenities to its residents.

The company is co-owned by longtime Spokane real estate developers Prokey and Greg Arger, along with Greg’s son, Gene Arger.

“Two years ago, we acquired an additional three acres to the south and began planning this new facility,” says Greg Arger. “The markets for senior living remain strong, and this facility will give us the added capacity we need to continue providing excellence in care. We hope to have work completed by June of 2018.”

Spokane Valley-based T.W. Clark Construction LLC is the general contractor for the project, and Sam Nystrom, of the Spokane office of Katerra Inc., which previously operated as Nystrom+Olson Architecture, designed the building.

Although the Argers declined to disclose an estimated cost for the project, building permits on file with the city of Spokane Valley put construction costs at close to $8 million.

The new building is planned to connect to Evergreen’s main building via an enclosed skywalk, and will include 39 units. Along with the living units, it will include a juice bar, sports and game room, garages, and wellness amenities. The project also will include development of an outdoor recreational park with walking trails and raised gardens.

Separate from the congregate-living building, the project also will include construction of 12 cottage-style triplexes.

Prokey Arger, who serves as the company’s executive director and site administrator, says the new facility is an extension of the company’s commitment to helping residents regain independence and live healthier lives.

“Over the years, we’ve developed a winning team, and a strategic formula of wellness programs designed to help residents with mobility issues,” he says. “We’ve had some success, and this new facility will serve to take our programs to the next level.”

Evergreen’s current 180,000-square-foot main building is a four-story, independent-living facility with a connected two-story, assisted-living wing to the north.

Gene Arger, who serves as the company’s marketing and leasing director, says the building has a total of 106 units, 75 of which are for independent living, while the remaining 31 are assisted-living units.

In addition to units within the main building, the property has six separate cottage-style triplexes with garages.

He says Evergreen Fountains has 135 residents in all, the majority of whom are couples residing in the independent-living units. He says the community gets a large percentage of its business through referrals, and word-of-mouth advertising.

The facility employs 60 people, including two full-time nurses for the assisted-living wing, and a security guard who staffs Evergreen during evening hours.

“The new Phase II building will likely require us to hire 15 to 20 more staff,” Arger adds.

In addition to regular staff, he says, Evergreen Fountains leases working space to a licensed nurse practitioner who is able to serve as primary care provider for certain residents, as well as a dental hygienist, massage therapist, physical therapist, and hairstylist. Arger says most provide services to individual residents by appointment, or through scheduled classes.

While the assisted–living wing does have its own dining hall and reception area, Arger says residents often comingle in common areas, as well as in the facility’s health and fitness center.

“We’re a 55-plus community, but our average resident is usually in their 70s or early 80s,” he says. “We tend to attract a more active audience due to our wellness programs.”

Arger says living units start at $2,550 per month for a 700-square-foot studio unit, and move up in price to just over $4,000 for a 1,500-square-foot, two-bedroom, two-bath unit. He says all rentals are private pay, and available on a month-to-month basis.

He says residents’ rental costs may vary depending on whether they’re part of independent-, assisted-, or light assisted-living programs.

“The independent-living costs include all utilities, two meals a day, housekeeping, transportation, and access to both the wellness center and activities,” he says. “Assisted-living residents have different needs, so their rent includes three meals per day.”

According to Arger, each new resident at Evergreen Fountains is given a wellness assessment by the facility’s wellness director, which highlights weaknesses that they can work on such as strength and balance.

“We use that assessment to develop a customized program for each resident,” he says. “They’re able to take full advantage of our classes and activities to help them stay active and achieve fitness goals.”

“People are capable of living longer, but they also want to live better,” says Prokey Arger. “We can help them move from a sedentary lifestyle to being able to move about freely and enjoy more time with their families.”

Prior to starting work on the second-phase building, Gene Arger says the company considered adding a memory care facility at Evergreen Fountains, but decided to focus instead on independent and assisted living.

“After 20 years in this business, you start to pick up on what it is seniors are looking for,” adds Greg Arger. “So we’ve used that knowledge to improve our facility and really make it a place they’ll enjoy.”

He says the new facility’s units will be mostly independent-living suites, designed in a modern, open format, and featuring one-, two-, and three-bedroom floor plans of up to 2,000 square feet.

“We’re still working on formatting pricing, but we expect the new suites to be similarly priced to those we currently offer,” he says. “But we’ve already started preleasing the new spaces to interested residents.”

Since 1979, Greg and Prokey Arger have owned and operated Arger Co. Real Estate Inc., a Valley-based real estate sales and property management brokerage. Gene Arger joined the family business as a broker in 2005.

The family owns and manages about 150,000 square feet of office space, including the CenterPointe Business Park just off north Mullan Road in Spokane Valley, and the Sunset Pointe Corporate Park at 1700 S. Assembly.

The Arger brothers say they started working in the senior housing business in 2000, with the development of Orchard Crest Retirement & Assisted Living Community.

Through their real estate company, the Argers say they’re also occasionally able to help prospective residents with selling their homes and transitioning into the Evergreen Fountains facility.

“We have experts on staff at Evergreen that specialize in helping residents downsize and move their belongings,” says Greg Arger. “We’re happy to provide those services, because they take a lot of pressure off seniors and their families.”

Looking ahead, the Argers say they might look at developing more senior living communities here, or elsewhere in the state.

“The trouble is finding available land in the right location,” says Greg Arger. “Evergreen Fountains is in an excellent location, being close to hospitals, access to the freeway, and local shopping. It doesn’t get much more ideal.”

Prokey Arger adds that while a majority of senior living communities are managed by large corporations, facilities like Evergreen come with a personal touch.

“Very few are locally owned and operated like ours,” he says.

Greg Arger says the company has a larger, more long-term vision for the Evergreen Fountains property.

“We don’t want to just build a property, and leave it to others to manage,” he says. “We’re willing to spend the extra dollars on construction to make the facility the best it can be, and stay on to make sure it continues that way.”

Arger says once he reaches retirement age, he plans to move into Evergreen Fountains himself.

“Why not? I’ve already got a suite picked out,” he says. “I’m part of that generation that wants all the bells and whistles, and that’s what we have here.”