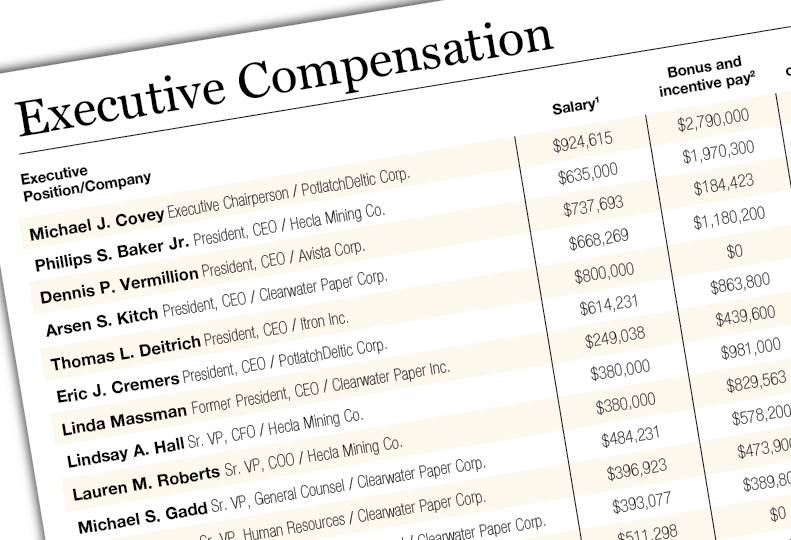 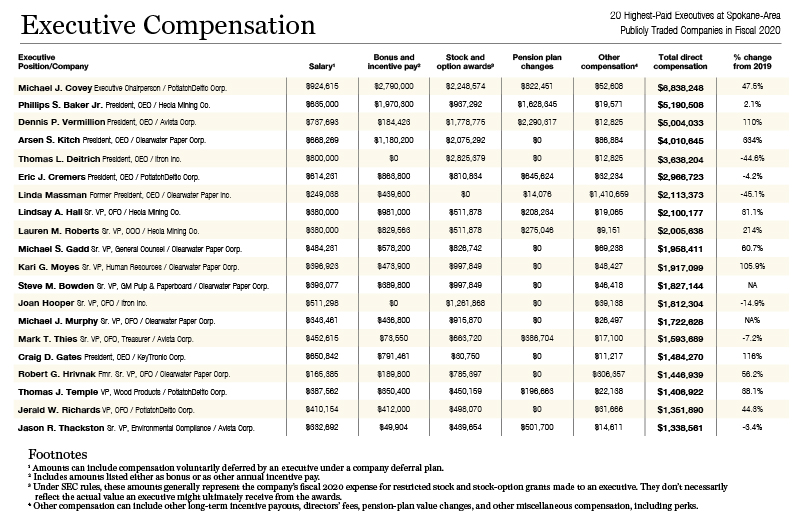 Executive pay at Inland Northwest-based publicly traded companies increased by double digits during the pandemic year of 2020, a Journal of Business analysis has found.

The surge in total compensation for executives occurred during an unusual recessionary period that devastated some sectors of the economy but provided favorable market conditions for a few—though not all—of the public companies here.

Also, five of the seven public companies here have changed CEOs—four due to retirements—since the summer of 2019. Those transitions catapulted new people into C-suite positions and prompted large increases in pay for a number of executives.

The end result: Average annual total compensation for 35 executives at seven Inland Northwest public companies hit $1.872 million last year, up almost 14% compared with $1.644 million for the same group of executives the previous year. Just under half—17 of the 35—received increases in pay, but some of those increases proved to be quite large.

Clearwater Paper Corp. President and CEO Arsen S. Kitch, for example, saw a 334% increase in total compensation when he was promoted from his previous position as the company’s senior vice president of consumer products. He replaced Linda Massman as Clearwater’s top executive when she retired in April 2020.

Clearwater—and Kitch—also benefitted from an explosion in sales due to the arguably unprecedented demand for toilet paper that occurred in the spring of 2020 at the onset of the pandemic, when many people were hoarding supplies. Largely due to that increased demand, the paper-product manufacturer reported net income of $77.1 million last year, compared with a net loss of $5.6 million the previous year.

Another instance of a change at the top leading to a triple-digit increase in total compensation involved Dennis Vermillion, president and CEO of Avista Corp. Having replaced Scott L. Morris as CEO following Morris’ retirement in October 2019, the longtime power company executive completed his first full calendar year as the company’s top executive in 2020, and his total compensation increased by 110%.

The other three CEO changes didn’t lead large surges in pay in 2020, though one was affected in last year’s analysis and another could be reflected data for 2021.

Eric Cremers became the president and CEO of PotlatchDeltic Corp. at the beginning of this year, so the promotion wasn’t reflected in his 2020 compensation, which fell 45%. His predecessor, Michael J. Covey, had a 47.5% increase in pay and finished atop the list, with total compensation of $6.838 million with the timber-products company.

Roberts joined the company in August 2019, succeeding Lawrence Radford, who retired. The large increase is due in large part to the fact Roberts worked for less than half of 2019 for the mining company, so the year-to-year comparison is a little misleading.

However, in the proxy statement Hecla released earlier this year, Roberts is credited with, among other feats, overseeing “the strongest safety performance in the company’s history,” leading the process of ramping up the Lucky Friday Mine back to full operation, and delivering an increase in silver production, illustrating that a portion of the increase in compensation is based on performance last year.

The Journal analyses are based on proxy statements that publicly traded companies are required to file with the U.S. Securities and Exchange Commission. Those filings include information about total compensation for top executives, referred to as named executive officers in proxies—and board directors.

Total compensation includes salary, bonus and incentive pay, stock and stock-option awards, pension plan changes, and other compensation, such as perquisites. Because of that, the figures in the report typically represent a substantially higher figure than what those in Inland Northwest C-suites actually take home.

Each annual analysis contains a different mix of executives, due to retirements, new hires, and a variety of other changes. Consequently, average and median figures from one study aren’t comparable to data from the next analysis.

The trends, however, are worth noting.

Clearwater’s previously mentioned strong financial performance in 2020 might have made for an exceptionally good year for the tissue maker, but it wasn’t the only company to report strong results.

PotlatchDeltic posted net income of $166.8 million last year, almost tripling its $55.7 in earnings the previous year. In the company’s year-end earnings report, CEO Cremers refers to 2020 as “a phenomenal year with all three of our businesses achieving record financial performance.”

Key Tronic Corp. also reported an increase in net income, albeit it more modest, for its fiscal 2020. The electronic services manufacturer posted $1.5 million in earnings, up from $817,000 the previous year.