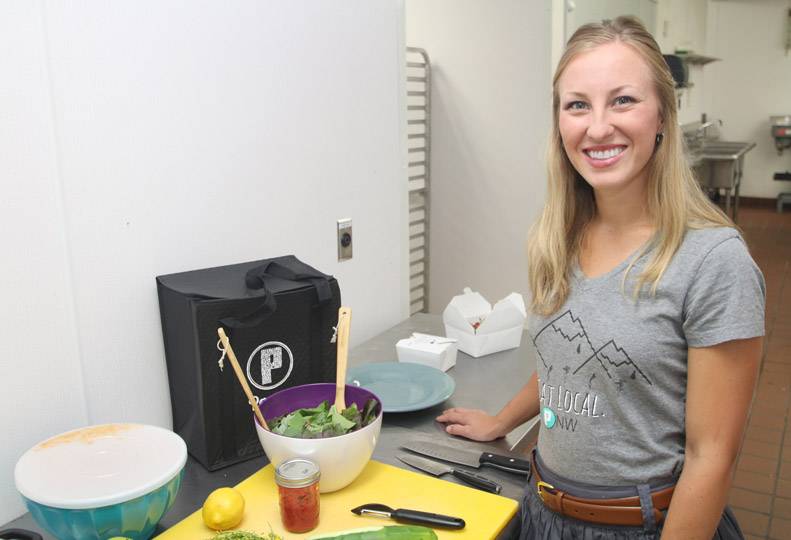 Formed in late 2014 and focusing on healthy foods made with locally sourced ingredients, Pantry Fuel prepares single-serve meals and makes weekly deliveries to Spokane-area residents. Currently, Van Cott says, the company delivers about 150 meals to more than 40 customers in a given week. She is projecting that the company will be able to double its volume during the next year.

For meal preparation, Pantry Fuel rents space at Kitchen Spokane, a commercial kitchen at 1014 N. Pines in Spokane Valley. The company has two part-time workers and contracts with a chef.

Van Cott says the business is operating at a profit and that she hopes to move Pantry Fuel into its own dedicated space next year. She says she added one of her two employees recently and doesn’t have plans to hire more in the near future.

In a typical weekly cycle, Pantry Fuel posts meal choices on its website on a Wednesday and takes orders until noon on Friday. The meals are prepared during the weekend and delivered—refrigerated but not frozen—on Monday.

Through much of the year, the company uses in its meals produce grown by Inland Northwest farmers, which is bought at farmers’ markets, through the Local Inland Northwest Cooperative, or directly from farms.

“Our vision is to utilize what’s available to us,” Van Cott says. “It’s harvested that week and on your table in three days.”

Meals range in price from $11 to $14 per serving. The standard meals come in either a heart-healthy or a protein-rich option, and dairy-free, gluten-free, or vegan alternatives also are available.

For customers who prefer to shop and make their own meals, the company also offers a weekly recipe subscription.

This fall, Van Cott says she plans to launch a new meal-ingredients delivery, something larger, national competitors such as Blue Apron and Freshly do. She envisions combining ingredients for easy-to-make meals that can be thrown into a slow cooker together, for example.

To fuel the company’s growth, Van Cott says she’s marketing the meal-delivery service to physician offices and other health-care providers in hopes that they’ll refer patients, an effort that’s starting to show results. In a week’s time earlier this month, she says, Pantry Fuel added three customers who are currently undergoing chemotherapy treatments while battling cancer.

A Spokane native and a 2013 graduate of Gonzaga University’s business school, Van Cott says she’s always been entrepreneurially minded, describing herself as the kind of person who would encounter a problem in her own life and look for the business opportunity in it.

The idea for Pantry Fuel came about when her grandmother was diagnosed with pancreatic cancer shortly after Van Cott graduated from Gonzaga. She helped to take care of her grandmother, and says, “It was so inconvenient to get her meals that were healthy.”

After her grandmother died, the memorial service was in Hawaii. There, Van Cott saw that her relatives relied a lot on meal delivery, but those delivery services mostly involved unhealthy take-out food from restaurants. Upon returning to Spokane, she developed the idea of delivering healthy meals and started Pantry Fuel.

Early on, Van Cott says her own social network, college students and recent graduates, comprised Pantry Fuel’s customer base. As the company has grown, however, the customer mix has become more diverse.

The largest demographic that the company currently serves is seniors.

“The senior market, those I really wanted to reach initially, is really growing,” she says.

That early customer base, now categorized as single professionals, is the next largest group, she says.

“I have little contact with those people,” she says. “They go online and make an order, and they aren’t home when we deliver.”

Primarily, though, Van Cott says she’s immersed in Pantry Fuel, staying involved in every aspect of the business, including meal preparation and delivery. Planning deliveries has proven to be one of the more challenging parts of the business, she says.

“I thought I was starting a food company,” Van Cott says, “but I’m really running a logistics company.”

She adds, “I love the food prep. I’ll probably always have my hands in it.”