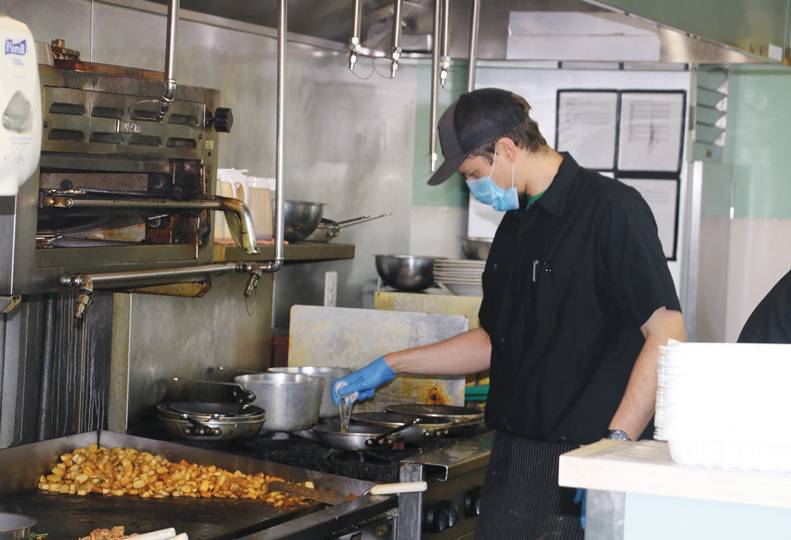 -KEVIN BLOCKER
Cook Andrew Tye works a morning shift at The Yards Bruncheon, in Kendall Yards. The eatery is one of the Eat Good Group’s eight restaurants.

Most mornings, Paul D’Orazi opens emails to find out which foods will be in short supply that day.

“Before COVID, you’d get three, maybe four of these emails a year,” says D’Orazi, general manager of Eat Good Group LLC, a company founded by chef Adam Hegsted that operates eight restaurants in the Inland Northwest, including Incrediburger in downtown Spokane. “Now it’s daily. And this list here,” he says pointing at the four items, “this is a short one.”

D’Orazi says he’s never seen the industry so thoroughly impacted by an outside force like COVID-19 in his 15 years of work in the food service industry.

And he’s hardly the only one. Other Inland Northwest restaurateurs say an inconsistent food supply has vexed them while ramping up for business in the wake of a waning pandemic.

In addition to having trouble filling jobs, local restaurant owners currently are saddled with food shortages. Prolonged closures at food processing plants in the U.S. at varying times during the last 15 months, intended to blunt the spread of COVID-19, have created inconsistent availability of certain food supplies while driving up costs.

Four weeks ago, restaurant owner Jeremy Tangen, who owns and operates six restaurants through parent company Tangen Hospitality Inc., says the company was paying $90 for a case of chicken wings.

He estimates that it would require charging customers between $30 and $35 for a pound of wings in order to make the slightest profit.

“Obviously, we’re not going to do that, so for the time being, they’re just off the menu,” says Tangen, whose company operates Fast Eddie’s All Purpose Pub and The Red Wheel, among others.

Then, just last week, Tangen says he was told by his chicken wings supplier the company doesn’t know if it will have access to wings beyond the beginning of July.

“And that’s just one food item,” he says. “Beef products ... anything that requires staffing for the processing of food products has been massively affected by COVID-19,” he says.

At Scratch Restaurant, located at 1007 W. First in downtown Spokane, chef Phil Vox says the restaurant to date hasn’t had to remove items from its menu due to a lack of availability of food items. But Vox says there are challenges.

“It’s harder to get fresh fish,” Vox says. “I’ve heard other chefs say this too. When the food chain gets messed up, it effects the freshness of certain items.”

In its most recent quarterly report issued April 26, the Washington, D.C.-based International Foodservice Distributors Association says disruptions in the country’s food supply chain are mostly a function of a labor shortage.

“Across the industry, an estimated 17,500-plus warehouse positions and 15,000-plus driver positions currently are open,” the distribution association says.

In a nationwide survey, 97% of food service distributors say their warehouse and delivery driver positions remain open “much longer” or “longer” now than before the pandemic, according to the report.

“Many businesses are facing lengthening delivery times as suppliers and the global supply chain strain under backlogs from the pandemic, rising demand, and complications due to severe weather,” the report says. “We will likely experience a shortage of skilled labor in many segments in 2021 and 2022.”

At the East Good Group, which also owns Baba and The Yards Bruncheon, in the Kendall Yards neighborhood just north of downtown Spokane, profits are up 10% in June compared to the month before the pandemic arrived, which is primarily a function of not having to pay as many employees.

The employee roll now is at approximately 180; down from 300 pre-COVID, he says.

“We’re asking more from our employees, and they’ve really stepped up,” D’Orazi says. “We’re proud of their efforts, but you always worry about burnout. People are getting back out and business is strong, but it’s a struggle to fill positions.”

Last month, D’Orazi perused a resume of someone who applied for a job with one of Eat Good Group’s restaurants. Upon contacting what he thought was a potential candidate, the applicant told him they wouldn’t start working until after the unemployment benefits expire in September.

“That doesn’t do us any good right now,” he says.

Additionally, many former employees have moved to other professions.

Vox says he’s concerned about the potential of a rise in cost to consumers over a prolonged period.

“It’s not just the rise in cost of food, it’s also in the supplies that are needed in the kitchen—soap, gloves, all paper products—everything costs more,” he says.

D’Orazi concurs, saying the cost of operating all locations now is 25% higher than what it was before the arrival of the pandemic.

Before the pandemic, six boxes of rubber gloves with 100 gloves in each box cost $100. That price has now tripled, he says.

“The economics of it all is unprecedented,” he says.