After move from Seattle, company is forecasting exponential sales increase 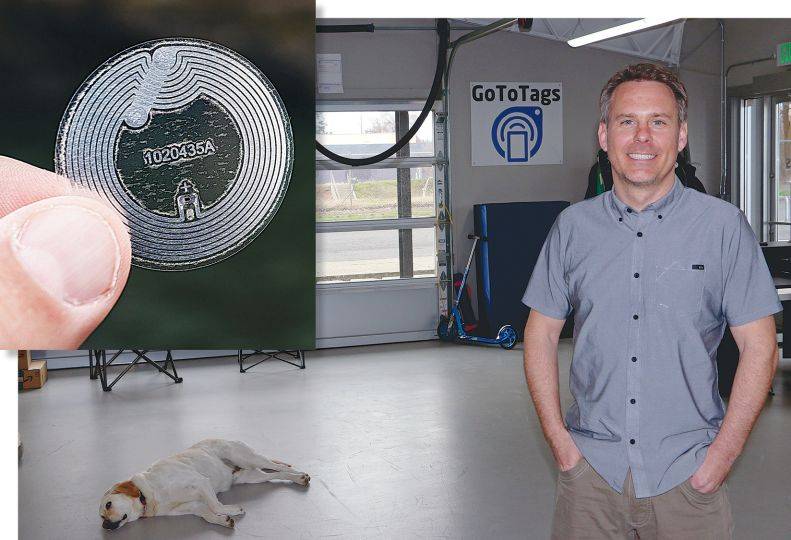 Software and data tag company GoToTags, which relocated to Spokane from Seattle last year, is on the verge of some big growth, claims CEO Craig Tadlock.

“Our target market is growing, and more brands are seeing what we can do,” he says. “I believe our growth is going to snowball really quickly once people catch on to the possibilities available with this technology.”

Tadlock calls the industry GoToTags operates in “connected things,” or technology that bridges the physical and digital worlds.

The company, which is incorporated as Wireless Sensor Technologies Inc., provides software, tags and hardware for near field communication, barcode or quick response, ultra-high frequency, radio frequency communication, and other similar technologies.

Tadlock says tags can be incorporated into items like stickers, cards, wristbands, magnets, keychains, and tokens, or imbedded into a product during the manufacturing process.

“Most mobile devices support NFC (near field communication), but people just don’t know about it or use it yet,” he says. “Tags are able to detect which type of phone you’re using, and suggest you download the corresponding software or app needed to view the content stored in the tag.”

Tadlock, a Spokane native who graduated from Mead High School in 1996, founded GoToTags in early 2011 in Seattle, where he’d previously had experience working with and starting tech companies.

“I used my background in tech and my experience with startups to create GoToTags,” he says. “I’d had this idea for a while that the online and physical worlds would eventually start to become more connected through mobile devices and wireless sensors.”

Tadlock says once Android developed support for tag technology in 2010, he determined it was “game on,” and started GoToTags using $50,000 of his own savings.

Tadlock says he decided to move the company last summer to Spokane, where its current headquarters occupy a 2,600-square-foot building at 612 N. Maple.

The leased office has an open floor plan, with room for Tadlock’s two dogs, an aerial acrobatics hoop, yoga mats, and scooters for employees to use.

Tadlock says that moving GoToTags from Seattle to Spokane will allow the business to keep growing.

“Seattle was a bit too expensive in terms of rent, employees, and services,” he says. “It was also hard to attract good talent among companies like Amazon, Microsoft, and Google.”

He says the move has enabled GoToTags to cut its operating costs by 18% and provide health insurance for its employees.

“We’re in a great neighborhood now, and fewer costs have allowed us to put more toward growing our team and our business,” he says. “We’re also able to work with other local businesses for things like video production and commercial printing.”

Tadlock says the company has seven employees now but is in the process of hiring a content manager.

“As we grow, we’re planning for about nine future roles, mostly in areas of engineering and business development,” he says.

He says when it first started, one of the company’s big challenges was finding a supplier of tags.

“It was difficult to find anyone who was selling them, and we need the tags in order for the software to work,” he says. “So, we started to sell them ourselves and 41,000 orders later we’ve become experts on tags, incorporating new features based on feedback and issues clients need help with.”

He says the Apple iPhone started supporting NFC technology in the iPhone 7 for ApplePay payments in 2016, but it wasn’t until last year that iPhone was fully able to read NFC tags.

“This was a huge moment for us and really accelerated our industry,” he says. “We’d been waiting for Apple to have that capability on the iPhone, and now that it does we’re going to have greater access to consumers, as well as some big-order tag deployments.”

Tadlock says the company already is working with larger Fortune 500 companies that are interested in ordering more than 1 million tags at a time.

GoToTags wants to expand its software systems to allow for more sophisticated management and analytics capabilities, as well as grow its sales, support and, operations as needed.

He says the company expects to start raising another $2 million in equity investment this summer that will go toward those growth goals.

“We want to raise funding from investors here who have similar visions of connected things and who appreciate the advantages of running an efficient company from a place like Spokane,” he says.

Tadlock says the company also plans to open an office in Rossland, British Columbia, to serve its Canadian customers.

“We’re looking into leasing space up there now and finding an employee to manage that office,” he says.

Tadlock says the company has been profitable for about six years now, with much of its growth being based on revenue from tag sales.

“We’re in one of the best positions we’ve been in, really,” he says. “The first quarter of 2019 was a record for us, and we’re taking that money and investing it in new employees and updates to our software.”

GoToTags runs its own online store to sell tags and also offers some products through Amazon.

“We’re able to print and encode tags here, but they’re manufactured by a French company with facilities in China,” he says.

While tags vary in price depending on type and size, as well as the volume being ordered, Tadlock says simple barcode tags can be printed for about half of a cent each, while NFC tags cost between 6 cents and $1 each, plus fees for encoding processes.

Tadlock says the company’s Encoder and Platform software are available for monthly subscription rates ranging from $10 for basic access on up to $200 for enterprise level. The company’s consumer applications for iPhone, Windows, and Mac are free.

Tadlock declines to disclose revenue, but he estimates GoToTags has the potential to grow its revenue by two or three times during the next two years.

“We expect to see exponential growth in software users and tag interactions as consumer adoption of connected things becomes more mainstream,” he says.

Tadlock says since its start in 2011, the company has seen about 14 million interactions on its software, and currently has almost 250,000 software users.

“Most of the software users and overall growth has occurred in the last 18 to 24 months,” he says.

He says most clients find GoToTags online and contact the company after seeing its work.

“We start by working with the client to figure out how best to incorporate a tag into their product,” he says. “Once we find the right tag, we then develop the software needed to collect whatever data they’re interested in based on their marketing goals.”

Tadlock says most people already know about NFC tag technology through its use for mobile payments and creative marketing.

Tadlock says NFC tags are small enough to be imbedded into action sports equipment like water skis and wake boards for product merchandising in retail, and product engagement and support by users.

He says NFC tags can be added to product packaging for merchandising, in order to engage customers during the buying process by connecting customers with product information.

NFC tags are used in the gaming industry to unlock special characters and skills, and also by companies that are looking to incorporate anti-counterfeiting measures into their supply chain.

“Fraud and counterfeit products making their way into the supply chain are big issues for brands,” he says. “This way, you can put a tag on the product during manufacturing and it can be identified as genuine because tags can’t be cloned.”

“The Amazon self-checkout (Amazon Go) stores are probably the most well-known example of this kind of technology,” he says.

Amazon Go is a chain of convenience stores developed by Amazon.com Inc. that have no checkout lines. Instead, technology is used to track the physical items a buyer choses and bills their account automatically after they leave. Amazon operates Go stores in three U.S. cities; Seattle, Chicago, and San Francisco.

“The future is all moving toward smoother user interactions like that,” says Tadlock. “Now is the time to be investing in this technology.”