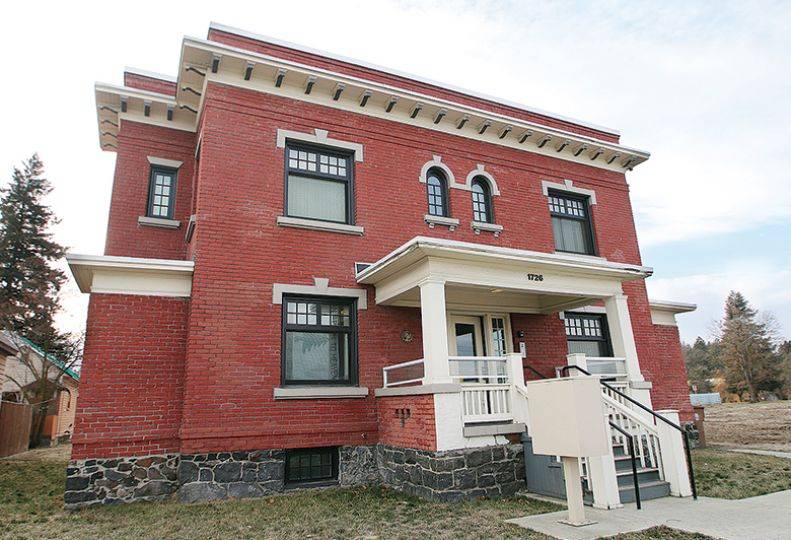 The Rose-Kly-Cecil Apartments building, located at 1726 E. Third in the East Central neighborhood, sits in the path of the planned interchanges to connect Interstate 90 and the $1.49 billion North Spokane Corridor being constructed by the Washington state Department of Transportation.

The eight-unit, roughly 4,300-square-foot, two-story structure built in 1910 was placed on the Spokane Register of Historic Places in 2010.

Chris Venne, an ECCO board member who’s involved in overseeing the project, says the organization plans to move the structure to the site of one of its community gardens, at 1807 E. Fourth, which will cease to exist once the building is in place.

“We own three lots over there, so it’s a very short move, but it is outside the freeway expansion footprint,” says Venne. “The garden was set up basically to utilize that space in the interim while we were preparing for the Rose move.”

The structure, originally named Rose Apartments after the daughter of engineer-builder Michael Hunz, currently has seven residential tenants. There is also a single-family cottage behind it occupying the same lot, which acts as a ninth unit.

“I think everybody is concerned about the loss of affordable housing; these nine units are all affordable,” says Venne. “They’re all for low- and moderate-income people, and the neighborhood has lost hundreds and hundreds of moderately priced rental and home ownership units because of the freeway expansion, and we just can’t afford to lose any more.”

The organization, however, is waiting for a decision from the state before it can move forward with installing the foundation and giving Spokane-based ZBA Architecture PS the green light to start designing the planned addition. ZBA also worked on the rehabilitation project for the building in 2011 and 2012.

Venne says ECCO plans to add a laundry room to the basement and possibly a two- or three-bedroom apartment unit for a low-income family.

Melinda Ziemann, Spokane-based relocation supervisor with WSDOT Real Estate Services, says the department is unsure if it has the funds to purchase the building in the current biennium, but intends to continue acquiring property at the start of its next funding biennium on July 1.  If current-biennium funding is available, an offer could be made as early as April or May, Ziemann says.

Venne adds, “The lynchpin of this whole thing is hearing from the state; without that, it’s even unclear what’s going to happen. As soon as we know we have a viable project, we’ll move forward as quickly as possible, but we’re not there yet.”

Venne says the process depends on an appraisal-based purchase offer from the state, and the purchase price must cover the cost of the move.

ECCO brought in Nickel Bros LLC, a Vancouver, British Columbia-based home and industrial relocation company, to consult on the move in September, following the notice from the state that it will purchase the building.

Venne says it’s difficult to figure the total cost of the relocation phase of the project, although he estimates the move and expansion at $500,000.

“We have an estimated cost from the mover …. but there are several elements that we don’t have costs to yet,” he says.

Some of the unknown costs include the potential electrical cost of lifting high voltage power lines that run north to south over the highway and up the street.

Those lines pose a hazard and can only be moved up so far before they require being shut off, which could be costly, he says. The organization examined several different routes, but the lines are in the way no matter which way it goes.

However, Venne says, that is a hypothetical expense it has budgeted in. The ECCO is hoping the building will remain clear of the lines, but it won’t know until the data on line height comes in from Avista Corp. Currently, the building is estimated to be 26 feet tall, and the steel beam and dolly combination will add another 6 feet, Venne says.

During the $1.2 million rehabilitation of the building in 2011 and 2012, Venne says the ECCO brought in a Spokane building mover, who has since retired, to consult on the necessary renovations to make the building stable enough to move, which included adding structural sheet plywood along the inside of the exterior walls to stiffen it and drilling thousands of helical “corkscrew” anchors through the mortar joints in the bricks into the studs on the inside of the building to lock the brick structure to the wooden frame.

Venne says the hope is to have the facility moved this summer and the living units available by fall.