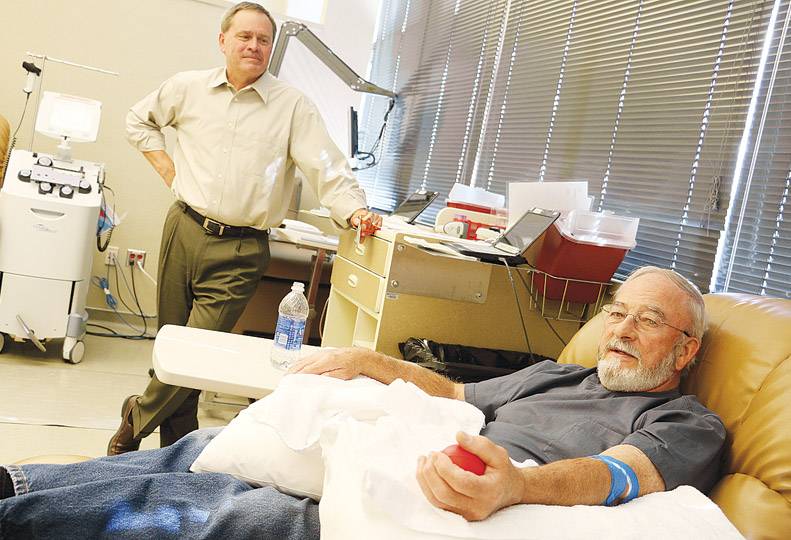 -—Virginia Thomas
Inland Northwest Blood Center President and CEO Jeff Bryant looks on as donor John Fry gives blood. Fry says he has provided INBC with 195 donations to date. Along with a decline in hospital demand for blood, Bryant says the center is seeing a dip in donations.

Spokane-based nonprofit Inland Northwest Blood Center is endeavoring to maintain revenue while hospital demand for blood is decreasing and donations of blood are declining.

INBC President and CEO Jeff Bryant says that as hospitals look to cut costs, buying less blood is one of the first actions taken.

“Virtually all of our income comes from fees we charge to hospitals, so the hospitals are our revenue stream,” Bryant says. “The decrease in demand for blood is a big challenge for us. Locally, we’ve been seeing a decrease of 25 to 30 percent in blood usage.”

While Bryant declines to say how much the blood center charges hospitals for a unit of blood, he says INBC has to charge a fee that will cover salaries and other expenses and enable the blood center to grow. Bryant also says the different kinds of blood products—red blood cells, plasma, and platelets—sell for different prices.

Meanwhile, the blood center, headquartered at 210 W. Cataldo, is seeing a dip in the number of donations per year.

INBC currently is pursuing donors with specific blood types to keep up with demand. Bryant says Type O negative is needed most, but O positive and B negative also are needed.

“As we’ve been more target-specific, we’ve seen a smaller inventory in the types that we need,” Bryant says. “One of the things we struggle with is our O negative donor base is really small. If you know anybody with O negative blood, we call them constantly and they get really tired of us calling.”

In an effort to cut costs in areas such as back office work and quality control, Bryant says INBC recently affiliated with nonprofit Blood Systems Inc., of Scottsdale, Ariz. According to INBC’s website, the affiliation gives INBC access to larger group purchasing organizations, customer service resources, and opportunities to participate in research projects.

“They can bring us a lot of expertise,” Bryant says.

INBC is also looking to expand its regional scope to include more hospitals that will buy donated blood.

“We’d really like to get into the Tri-Cities, Missoula, and the Kalispell area,” Bryant says. “There’s areas in central Washington and western Montana where we feel we would be a very good choice as their blood provider, and we’re trying to engage them in some conversations.  We have to do something to offset the demand at our local hospitals, and that seems to be the best option that we can see.”

Bryant says INBC is also looking for opportunities to export blood to other areas of the country. The center sometimes will supply blood to communities that don’t have enough local donations, such as San Francisco and Los Angeles.

“That can sometimes be a little controversial, but I’m in the mindset that it’s our business to help people,” Bryant says.

Bryant says INBC is hoping to implement the system at other hospitals it serves.

“We’re currently in discussions with Valley and Deaconess to get those in,” Bryant says. “We’re hoping to get them in by the end of the year.”

“Most blood centers are similar in size to us and cannot serve a whole system,” Bryant says. “What the hospital system is doing is trying to drive down the price they pay for a unit of blood.”

Bryant says smaller centers are also at a disadvantage because larger centers often can give a hospital system a volume discount.

“As we see hospitals consolidate, partner, merge, affiliate, it has had the same effect on our industry,” Bryant says. “So you’re seeing a contraction in the blood center world. Smaller centers have to merge and affiliate, much like we’ve done with Blood Systems Inc. And you do have to be careful because there’s antitrust laws that we have to follow. It’s just a tightrope that we have to walk to make sure we don’t do anything inappropriate.”

While demand and donations are down, Bryant says volunteer numbers are higher than ever. He says he believes that’s due mostly to the work of INBC’s volunteer coordinator, Selina Worley.

INBC has satellite centers in Lewiston, Coeur d’Alene, Moses Lake, and Spokane Valley. The blood center also has several mobile collection buses, which travel as far north as the Canadian border and as far east as the Idaho-Montana border.

Most of the blood center’s 170 full-time and 20 part-time employees are based in Spokane, though a few employees work at other collection centers or in one of the mobile collection buses. Bryant says one of the ways the center is hoping to decrease costs is by becoming more efficient, but he says that tactic isn’t sustainable.

“You can only do that for so long, you put a lot of pressure on staff,” Bryant says. “If you do that, your customer service really suffers and people will quit donating blood.”

The blood center opened its doors as the Spokane Community Blood Bank in late 1945. The center’s name changed to the Spokane and Inland Empire Blood Bank in 1956, and finally to the Inland Northwest Blood Center in 1992. INBC opened its first satellite location in Coeur d’Alene in 1998. Earlier this year, INBC established the Blood Center Foundation, which has since awarded three grants totaling $53,000. Two of the grants were awarded to Sacred Heart; one was awarded to Blood Systems Inc.

More information on the blood center can be found at www.inbcsaves.org.