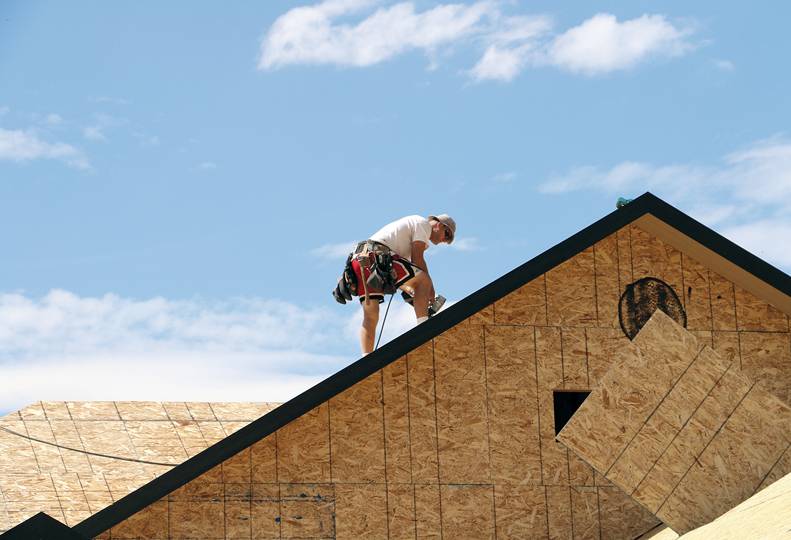 -Kevin Blocker
A builder works on a new home in North Spokane earlier this month. Prices for wood products have pushed the average cost of a new home up by $16,000 this year.

Triggered by a series of factors, the National Association of Home Builders and member organizations across the country are alerting political figures and the public about an extreme spike in lumber prices.

The subsequent effect of the explosion has led to a steep rise in the price of new construction on single-family homes that has home builder associations worried about consumer affordability.

Meanwhile, Mark Gatlin, who owns and operates Discount Lumber, Metal & Truss in North Spokane, says Oriented Strand Board plywood sheets currently sell for $28 per sheet, well over triple the $8 a sheet price in March. OSB plywood is the most used sheathing and flooring building material in homes.

A recent National Association of Home Builders study shows the softwood lumber price increase caused the average price of a newly built single-family home to surge by over $16,000 from April 17 to Aug. 21.

Joel White, executive officer of the Spokane Home Builders Association, says based on Spokane County’s income demographics, roughly 200 families are priced out of the new home buying market for every $1,000 increase in the cost of the home.

“This is a big deal right now, and it has everyone’s attention across the country,” White says.

Many home builder associations around the U.S. are lobbying their respective legislative representatives and calling for a national increase in the production of softwood lumber, according to White.

Incentivizing domestic production and reducing the penalty on Canadian lumber are among some of the ideas being discussed, he says.

Historically, U.S. demand for lumber exceeds what domestic mills can supply. As a result, the nation’s housing industry has been heavily dependent on a consistent supply of Canadian softwood lumber for decades.

But the 2006 Softwood Lumber Agreement between Canada and the U.S. expired on Oct. 12, 2015. Trade tensions have only escalated ever since.

Early in 2017, the Trump administration imposed tariffs averaging 20% on Canadian exporters of softwood lumber. Later, near the end of the year, the U.S. International Trade Commission ruled that the domestic lumber industry had been harmed by Canadian softwood lumber imports, a decision that allowed the U.S. Commerce Department to maintain tariffs against Canada.

Then, in March 2020, the production of lumber in the U.S. took a severe hit when lumber mills shuttered in states in an effort to help stem the spread of COVID-19, White says.

Across the Inland Northwest, the housing industry is facing a shortage of labor, land to build on, and lumber. All those elements combined jeopardize the ability for individuals and families to secure affordable housing, White says.

“We already had low inventory in all three categories before COVID,” he says.

White, who is 43, says he’s been involved in the housing industry for 20 years. A Clark Fork, Idaho, native, his parents operated and owned a lumber yard there when he was growing up.

He says the only other time he’s ever seen such a dramatic increase in the price of single-family homes was about three years ago, when the U.S. first imposed tariffs on Canadian softwood lumber.

“But that was very short term,” he says. “The worry here is that this has the ability to last a while if lumber production doesn’t increase.”

Earlier this month, the Spokane Home Builders Association posted a job opening for an operations director. He’s received applications from all over the country, something he’s never seen before.

Most of those places are markets where residential sellers can fetch more on the market there and better compete for a home purchase here.

Discount Lumber’s Gatlin says COVID-19 did something that he’s never seen in the 40 years he’s been involved in the lumber industry.

“The mills and wholesalers weren’t prepared for the do-it-yourselfers,” says Gatlin, whose grandfather, Howard A. Gatlin founded the company in 1943.

Mark Gatlin took over running the company, at 8003 N. Market, from his father, Howard A. “Bud” Gatlin, in recent years.

Gatlin says the lumber industry is about to enter its busiest season when demand surges between September and November.

“Usually in about August, when the weather gets hot, the loggers are kicked out of the woods to reduce fire threat,” he says. “So, the mills are having a hard time getting logs.”

Historically, wood products manufacturers have been reluctant to produce an overabundance of lumber out of fear of an eventual price crash, Gatlin says.

And in what is clearly a different time for the industry, he thinks the price of lumber will remain high for an indefinite period.

“I don’t see them (lumber prices) coming down in the near future simply because there’s such high demand,” he says.