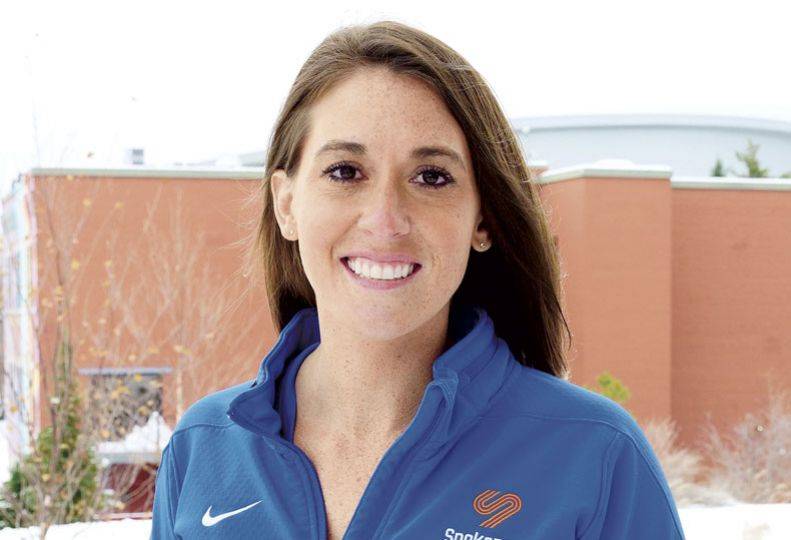 Ashley Blake assumed her new role as chief executive officer for the Spokane Sports Commission on Dec. 5. Formerly the organization’s vice president, Blake is taking the helm for Eric Sawyer who was the organization’s CEO for 30 years.

Blake hails from upstate New York and moved to Spokane in 2010 to pursue a master’s degree in sports and athletic administration at Gonzaga University. In 2011, she began her career at Spokane Sports and has been with the organization since then.

Spokane Sports is a nonprofit economic development organization founded in 1989 that recruits, retains, and facilitates sports events for the Spokane region. The commission has six full-time staff members with an estimated annual budget of $1.2 million. Next year, events recruited by the organization are expected to bring in $102 million in economic impact to the region through at least 62 scheduled events.

The Journal recently caught up with Blake in her last days as vice president to discuss her new role, the organization’s impact on the community, and how she plans to follow her longtime mentor, Eric Sawyer, in the position.

What attracted you to this industry? Are you an athlete yourself?

Yes, but I wouldn’t say my athleticism was going to take me pro. I am much better at the business side of sports and putting the whole thing together.

What I like about it more than anything is the ability to make an impact on a community. Our team, for example, just wrapped up our 70th event out of 72 total events for the year. It’s appealing to think you are filling restaurants and businesses and keeping hotels occupied while exposing the brand of the region. That’s the appeal to me.

And of course, there are also all the different dynamics that go on with putting on a sporting event. It’s a big lift to bid, plan, and execute these events. There are thousands of menial tasks, and they all stack up to each other to the monumental moment—the national anthem and an event starting on time, whether you are ready or not.

Moving from vice president to CEO, what will be your focus?

My current role as vice president is much more focused on vision and strategy of the type of events we will host and how we will show up in the space. Moving into the CEO role, I’ll definitely keep an element of that, because that is my strength, and connectivity to the industry is important. But my role will be more administratively focused. I will be making sure we are staffed adequately and that our team has the right resources. This year, we are hiring an army of interns, 10 undergraduate and graduate students from local schools.

We do amazing things and put on killer events, but we are a staff of six. Our team is so focused on nailing the logistic components of events that we are not really coming up above the bar and sharing the story of Spokane Sports and what we are doing to move the community forward and positioning ourselves as a community asset. That will be a big initiative for me, sharing the story of what sports do for Spokane, how they put us on the map for national media coverage, and how they contribute to our caliber of life here.

Since you began working for Spokane Sports, how has the organization changed over the years?

It’s a pretty exciting moment for sports in Spokane. When I started a decade ago, we were kind of this small, under-the-radar, mom-and-pop organization. We did a few big events here and there, but really, we were focused on grassroot sports and regional sports. Since then, we’ve made an intentional shift.

We are going to continue working toward hosting bigger events that put Spokane on the map nationally. We love things that have an ESPN broadcast and media attention that shows the spanning beauty shot of downtown Spokane. We like events that have Olympians competing and world team members—and anything where we can attempt a world record. We’re very intrigued by events that have a spectator appeal, and we’re asking ourselves, what will Spokane come out for?

The feedback we get from clients is that Spokane shows up when we bring an event to town. Spokane rolls out the red carpet. Every little restaurant downtown will stop to say, “Good luck this weekend,” and “We’re happy to have you here.” It’s amazing because we can’t create it or curate it; it’s just who Spokane is.

That shift from grassroot smaller events and our eye on a bigger national or international stage has been big on our priority list.

Has that been a big learning curve?

The USA Track & Field Indoor Championships is one of the most celebrated events in the track scene. We had that in the pipeline to bring to The Podium for 2025 once we figured out how to really operate the facility.

Then I asked: What if we moved that event up and host it in our second month of opening this facility in February 2022? What will that get us?

We won the bid for that event, and so many things fell into play. It helped that The Podium was design-build. As we were building the facility, we were making choices about design elements of it and were able to get the attention of USA Track & Field, which gave us pointers along the way.

If we hadn’t moved that event up in priority and timeline, we could have made mistakes that could have cost us on the design side, but because we had their engagement, it helped us deliver a facility that met their needs.

All those elements helped us be more confident in ourselves, to reach a little higher, and fight above our weight class.

As you take over for Eric Sawyer, how are you honoring his legacy?

Now, we are looking at what our next facility project is. How can we find that balance of supporting national events while also supporting our local needs and grassroot sports? That is probably the best way I can honor his legacy, to be thoughtful and intentional about building facilities that will leave Spokane in a better place.

We are in our daydreaming phase right now. We have a facilities task force that is our board of directors, and we are evaluating lots of options right now.

It’s a balance. The Podium is in year one and won’t reach maturity for five years. We are still trying to evaluate how we are going to interface with the new stadium (near downtown) and what our responsibility will be there. We must do some growth and diversifying of our funding to really take on the next level of responsibility.

What do you look forward to accomplishing?

For me, it’s the ability to see a vision and build a roadmap to get there. I’m excited to double down on our people and make our staffing plan sustainable. I want our staff to feel they are part of something greater than them. Helping to preserve and grow our people is going to be amazing.