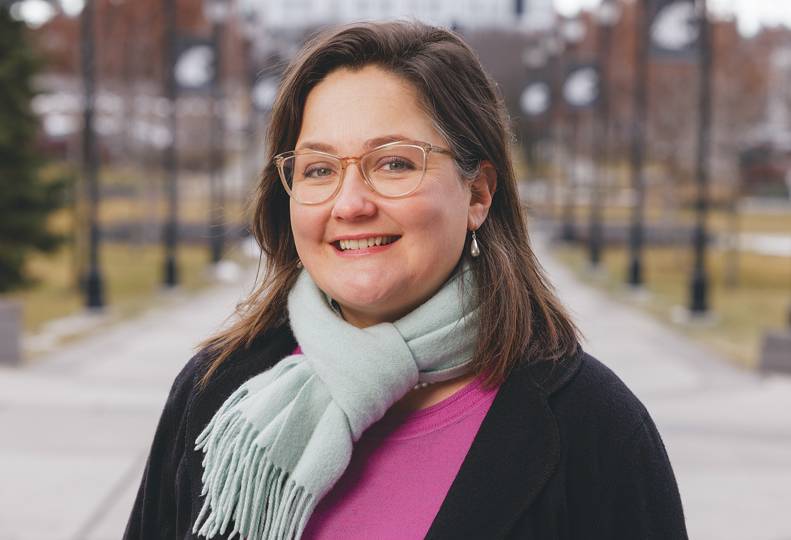 Juliet Sinisterra has over 25 years of experience in project management throughout the Pacific Northwest, including strategic development, urban planning, master planning, and small business development. After years of working in project-based roles, she has found a home in her new position as the CEO of the University District Development Association.

Sinisterra is a born-and-raised Spokanite. Her parents attended Gonzaga University, and she attended Gonzaga Preparatory School. She received a five-year professional degree in architecture from Washington State University and interned at Integrus Architecture PS, under the direction of the firm’s founder, Bruce Walker. While an intern, Sinisterra worked on the model for Riverpoint Campus, laying out the initial buildings that stand there today, such as the WSU Academic Center.

After graduating, she worked in Seattle for several years doing master planning for museums before returning to Spokane in 1998. Sinisterra worked on several architectural projects, including as project manager for Riverfront Park’s Master Plan through the City of Spokane, during which she managed a 20-person citizen advisory committee that helped secure voter approval of a $64.3 million bond measure in 2014.

The Journal recently sat down with Sinisterra to discuss her career, her vision for the University District, and what she looks forward to accomplishing in her new role.

In your new role, what is it that you envision for the University District?

What I have found with urban and economic development—and a lot of this comes from being an architect and a visual person—is that people tend to respond to visual imagery. I feel that is one of the strongest aspects we had with the Riverfront Park Master Plan. We had a lot of visual images that really conveyed the ideas and concepts of the park. It was really easy to talk to the public and get buy in and support—or not, because it helped people also clearly say what they were concerned about.

I really like the idea of having a clear vision of where we are headed as an organization. Spokane is on the cusp where development is really starting to happen. It’s booming everywhere. The University District has spent many years trying to figure out its role. Now, it’s time to move on the development end of it.

We want to be thinking of the bigger picture, particularly with the south area of the district. How can we really become this thriving live-work urban village? How can it become a vibrant place to be? We want people living there, working there. We want restaurants and street life—a district with a diverse set of uses, but also one that thinks about equity and sustainability.

We will be working with the University District Development Association board in trying to move forward this vision. It will also make it easier for me when I get approached by developers to have that clear vision and be able to share it with them, and I get approached a lot.

Can you talk more about being approached by developers?

They come, they’ve heard a little bit of the University District, and heard that Spokane is kind of a hot spot right now. A lot of them want to do housing and learn more about the district. So, I tell them about the Boxcar and Catalyst, and it’s fantastic. But their question is always, why would someone want to live there? What is there for residents that is vibrant and would entice people to live in the district? That’s where I feel the hole is right now.

We need to figure out, and we need to convey to them: This is our vision for getting there. Yes, we know we need X, Y, and Z types of things, like street life. Because I think a lot of them are not willing to pull the trigger until they start to understand they are coming into a district where it’s not just talk, but action.

Are any of these visions and plans ones that were passed down to you from your predecessor, Lars Gilberts?

There has been a lot of planning over the years, for sure. The first executive director for the district, Mark Mansfield, was also an architect. He had a strong vision, in an urban sense, of what the University District was going to be. He did a number of planning studies and designs that I think are still relevant today.

Then Lars came and he had more of a public administrator, nonprofit background. He brought a lot of collaboration and community building to the role, and really brought a lot of partnerships with the University District throughout the region. He doesn’t have an architecture or urban planning background. I think he realized, when he was leaving this role that it’s time for that kind of vision again. I think that’s one of the reasons he recommended me for the role. He saw that the University District was a point where it needs to take off.

Did you always want to do architecture? What interested you about it?

You know, I remember it’s always what I wanted to do. What interested me about architecture was the urbanism. It was the city. That’s always been my passion. And Spokane has been my passion. How can Spokane be a beautiful place that brings joy to people? Because, when I studied abroad in Florence, that city brings joy to people. And it supports families and individuals. It’s a place that holds the community. That was so moving to me when I studied there, and I thought, why can’t we recreate that here?

I think it’s always about that balance of city and nature, how they can inform one another, benefit one another, and honor one another. That was one thing that I loved when I lived in Florence, was that the density allowed you to be in the city, walk in the city, and then you could easily leave the city. Within five minutes, you were in the countryside. They don’t have a massive urban sprawl. They protect the community, and they protect nature. Both live in balance that way.

Creating density versus and urban sprawl is a huge topic in Spokane. Is that a topic of contention within your organization?

For the University District, we are such an urban district that I think for us, it’s the recognition that people in cities still need access to open green spaces, and to plan for that appropriately. It’s about honoring that place of where we are, you know? We are in this beautiful landscape. How can our urbanism complement that, and not destroy it?

Density is a hot button issue in Spokane. But you know, there is something about direct access to nature here, with our river, with the bluff and the beautiful park system.

What do you look forward to in this position?

I’m really looking forward to getting through this strategic plan for the board. With the Riverfront Master Plan, it was a project that was so near and dear to me. But it was also only a three-year position where I helped move it forward but didn’t see it all the way through. So, it’s exciting to be in a position where I can see a lot of our projects through to fruition, instead of just being the master planner, getting things going, and then leaving. To see those plans come to fruition on an urban scale I think will be really gratifying.

When I was living in Portland for a bit, my husband and I came back for the grand opening of the Pavilion. As we were walking up there in the evening, there was a father and daughter walking down, a light show in the background, and I heard the daughter say, “That was the coolest thing I’ve ever seen!” We both looked at each other and said, OK, we can retire now. In this case, to see projects to fruition and see people loving it and enjoying it, that would be wonderful. That would mean the world to me.

Do you hope to retire in this position?

It’s funny, when I interviewed for this position, I told the board I’m not a personal-ambitions person. It’s more that I want to be doing things I am passionate about. As long as this makes sense to me, I want to be doing it. It really is a good fit for me. Never say never, but I know this will keep me busy for a long chunk of time.