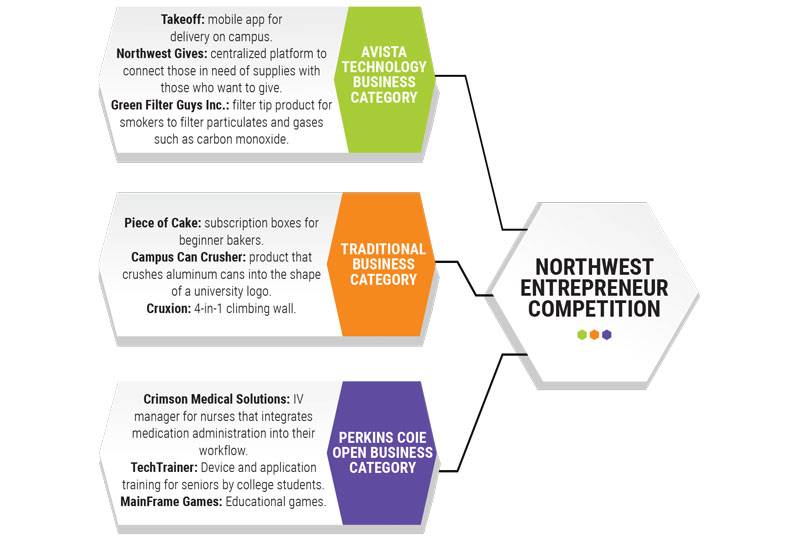 Ryan Arnold, director of regional entrepreneurship strategy at North Idaho College, says 35 high school and undergraduate student teams from Washington and Idaho initially entered the competition. In the final round, nine teams across three categories will compete for cash prizes of up to $10,000.

First, second, and third place winners in each category will receive cash prizes of $10,000, $3,000, and $1,000, respectively. Team members in the open category must agree that any cash received through the competition must go to the student competitor of the team. Arnold says this is to ensure that the focus remains on students.

Competitors in the traditional business category include Takeoff, a mobile app for campus food delivery; Northwest Gives, a platform to connect those in need with those who want to give; and Green Filter Guys Inc., which makes filter tip products for smokers to filter particulates and toxic gases.

In the technology business category, competitors include Piece of Cake, a baking subscription box service; Campus Can Crusher, a product that crushes aluminum cans into the shape of a university logo; and Cruxion, a four-in-one climbing wall for home use.

Competitors in the open business category include Crimson Medical Solutions, an IV manager for nurses that integrates into their workflow; TechTrainer, a service to help train seniors to use technology such as smartphones; and MainFrame Games, which makes educational games for kids.

Addie White, the inventor of Campus Can Crusher, says she plans to use funds from the competition to buy equipment to create the aluminum can crushing device that turns cans into university logos.

Luke Busby, half of the sibling team that makes up Tech Trainer, says he and brother Tate conceived of a service to help seniors understand how to use devices such as smartphones after they watched their own grandparents struggle with technology.

Busby, a business administration major at Gonzaga University, says the idea is to employ students to help train seniors in using devices and applications.

He says funds from the competition will be used for marketing expenses and content development. He says he hopes to put together a presentation for retirement homes, which he says are a promising base for the service.

Lars Gilberts, CEO of the University District, says that in addition to the three competition categories, a people’s choice award of $2,000 will be presented to one of the teams.

Spectators can tune in via Facebook Live beginning at 10 a.m. on April 15 to watch final investor pitch presentations for all three categories throughout the day, in addition to the awards ceremony at 2:30 p.m.