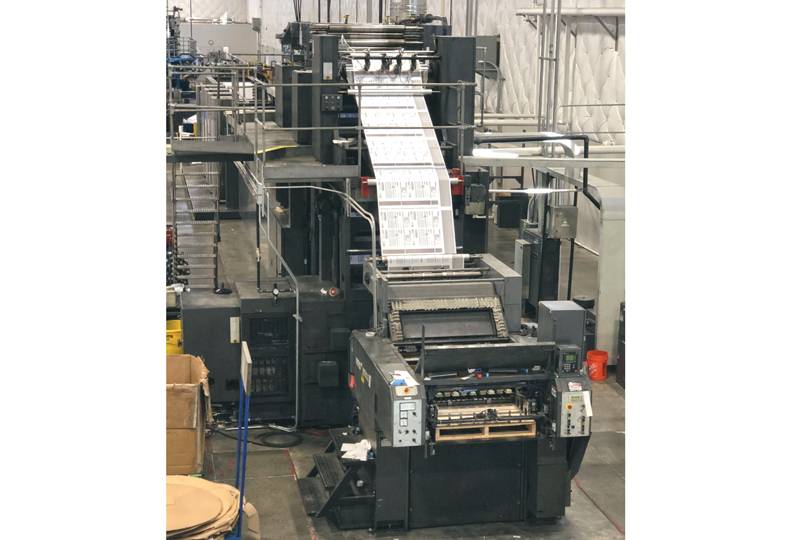 When CBS Sports was looking for an opening to its preview of the NCAA Men’s Basketball Championship between Gonzaga University and Baylor last month, Northwest Offset Printing got the call.

“I was contacted by the CBS production crew in New York,” says Julie Yake, Northwest Offset’s sales and marketing director. “They filmed on site. They wanted to capture our local newspaper (the Spokesman-Review) rolling the presses on Zags’ stories.”

The images depicted a state-of-the-art press churning out papers at the plant, located at 19223 E. Euclid in Spokane Valley. The new facility marks a shift to an emerging industrial area for operations that had been in downtown Spokane for more than a century.

The plant is located east of Barker Road and south of Trent Avenue, on property owned by Centennial Real Estate Investments, another subsidiary of Cowles Co.

“The location has been very beneficial, especially with the access to Interstate 90,” Yake says.

Cowles Publishing Co. rebranded its press operations as Northwest Offset Printing in 2019 and moved to the new site last year. The company is an affiliate of Cowles Co., which owns the Spokesman-Review and the Journal of Business through separate subsidiaries.

With the new location, Northwest Offset has broadened its approach to the print trade, printing such newspapers as the Spokesman-Review and Tri-City Herald as well as magazines, catalogs, training manuals, real estate brochures, and college guides.

“It was a tremendous vision to support local journalism by expanding the print business,” Yake says. “Other newspapers are actually going in the reverse and closing their commercial print business.”

A Goss Magnum Press, previously owned by the New York Times, replaces a Goss Metroliner press that had been housed at 1 N. Monroe downtown since 1981. Russ Snelling, Northwest Offset’s operations and plant manager, says the company uses the Goss Magnum to print newspapers, tabloids, specialty flyers, and broadsheets. It relies on a separate Goss M600 press, installed at the Valley plant in May 2020, for brochures, glossy magazines, and mailers, among other items, Snelling says.

“That’s the type of stuff we couldn’t print before,” he says. “We’ve got a commercial print operation that can not only print newspapers but a variety of other publications as well.”

The Magnum includes “cold set” and “heat set” hybrid ink-drying technology that Yake says “allows for flexibility to meet multiple customer needs.” A heat-set glossy cover, for instance, can be bound with cold-set newsprint pages on the inside.

The operations include direct-mail technology that optimizes accuracy and speed.

Northwest Offset has more than 85 employees. The specialized work requires journeyman press operators that can be a challenge to find. Current staff includes transplants from as far away as New Hampshire and Florida. Yake says Northwest Offset also is bringing in apprentices who will work alongside established press operators for three years before qualifying as journeymen.

A fleet of Northwest Offset trucks, augmented by some third-party freight companies, handles delivery duties. Nearly 10% of the company’s employees work in delivery.

Snelling claims the new, single-wide press is the wave of the future, boasting increased efficiency and a smaller footprint than its predecessor.

“We don’t need those giant (double-wide) presses anymore,” he asserts.

The Magnum can produce three-section newspapers at a rate of 40,000 copies per hour with each page in full color.

In contemporary publishing, the equivalent of a utility player carries considerable value, according to Tom Loesch, president of Burlington, Washington-based imPRESSions Worldwide Inc., which installed the Magnum press in the Valley.

“Versatility is more important than large capacity,” Loesch says. “The Magnum will take a little longer to print an edition of the Spokesman-Review each night, but it will be busy the rest of the day with other jobs.”

The M600 press that brings enhanced printing diversity to Northwest Offset was previously owned by a large commercial printer in Mexico City. Snelling made the trip south to conduct a test run before the equipment made its way to Spokane Valley.

Plant construction began in July 2019 and was completed that November. It includes over 70,000 square feet of space with ceilings as high as 35 feet. In addition to accommodating the pair of printers, the site features office space, a machinist shop, bindery and inserting equipment, and newsprint storage.

Northwest Offset’s customers are based across Washington, Idaho, Montana, and Oregon. Shifts here have been broadened to address printing and distribution demands in a variety of markets.

“We’re expanding rapidly to 24/7,” Yake says. “We’re going to have to accommodate the workload.”

As the one-year anniversary of Northwest Offset’s first printed paper at the site approaches, Yake says, “We’re trending toward our goals. Print is not dead.”