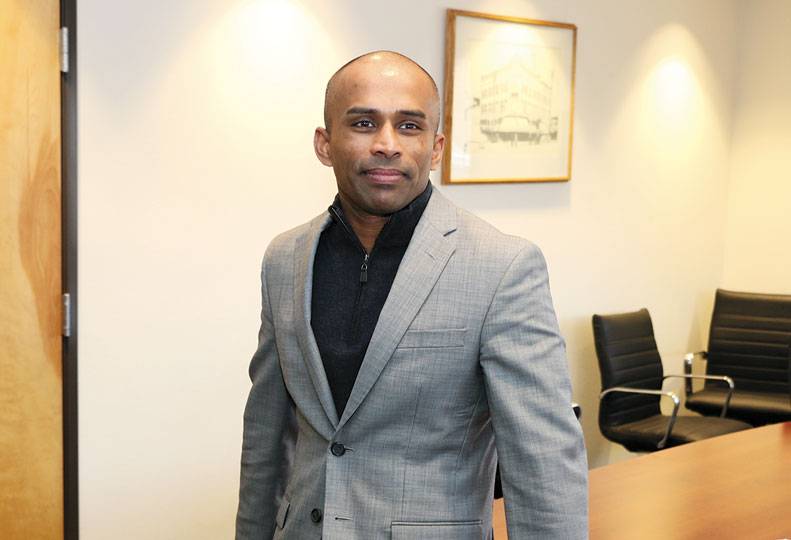 -Natasha Nellis
Dr. Chandima Bandaranayaka is CEO of Photon Biosciences LLC, which was founded in 2017 by two WSU professors.

Dubbed Photon Biosciences LLC, the company was founded in 2017 by ChulHee Kang and James Brozik, who specialize in protein engineering and biochemistry, and spectroscopy, respectively.

The technology, dubbed PBS by the company, focuses on the third component of diagnostic and biological imaging analysis, which is the probe molecule, says Photon Biosciences CEO Chandima Bandaranayaka.

When testing for diseases or health conditions, physicians are looking for a specific analyte, which is the substance being identified and measured during a chemical analysis, Bandaranayaka explains. A detection molecule is used to bond to the analyte, and then a probe molecule binds to the detection molecule for lab analysis.

“One of the major limitations in current technologies is the probe molecules and their stability, and because of that, the sensitivity,” says Bandaranayaka. “We are developing a new class of probe molecules that can be applied to various biological imaging and diagnostic applications.”

It currently has four employees, including the two company founders. Bandaranayaka started with the company in 2019 in a consulting position and took the helm as CEO early this year.

Bandaranayaka estimates the company is about two years away from bringing the product to market for widespread use.

He says Photon Biosciences currently is working to secure additional funding to develop the device to commercial scale and carry it through the FDA approval process.

Currently, the company is working to apply the technology to detecting heart failure and blood platelet contamination.

The idea is to focus on blood banks for the blood platelet contamination platform, says Bandaranayaka. The heart failure platform is intended for use in at-home testing, clinics, and emergency transportations services, he adds.

The team chose heart failure detection specifically because testing for multiple analytes is critical in heart failure, as testing has to rule out different conditions when determining what is wrong with a patient’s heart, he says.

Such testing would have more timely results than conventional diagnostics, he contends.

“It currently takes about 45 minutes for the patient to come to the hospital if they detect a heart failure condition right away, and even more to get the test results at the emergency room,” he says.

The new platform aims to eliminate that lost time, by allowing emergency medical teams to test for different conditions while en route to a hospital, so hospital staff can be ready to treat the patient on arrival, Bandaranayaka says.

“And heart failure is still a major cause of death in the U.S. specifically, and the rest of the world,” he adds.

The company’s goal is to develop PBS into a platform technology that can be used for at-home or clinical testing or that can be licensed to other companies for use in their applications, he says.

Photon Biosciences is currently in licensing discussions with a few companies, Bandaranayaka adds.

“It’s clinical-level sensitivity you can reach at home, but it can also be used by clinics, because it is increased sensitivity,” he says.

Current tests have shown the technology to be 100 to 500 times more sensitive than what is currently on the market, depending on the application, he claims.

“I think what sets it apart is the ultrastability of the molecule,” says Bandaranayaka. “These probe molecules you can detect based on their fluorescence, or the light that they emit. One of the limitations is that the background light, what is called autofluorescence, contributes to the signal when measured.”

The technology developed by Photon Biosciences is designed to make the probe molecules last longer than the background molecules, he explains, meaning that the person analyzing the information has more of a chance to detect anomalies or read the data.

“They are ultrastable, and therefore we can use a technology called time resolved fluorescence, or TRF, to detect the signal from those molecules,” says Bandaranayaka.

The company currently has a patent pending on its core technology, which is the genetically expressible molecule, and has a proprietary biomineralization process that accompanies those molecules.

Photon Biosciences has received two grants totaling $415,000 from the National Institutes of Health, both of which were matched by the Health Sciences and Services Authority of Spokane. The company has also received a grant from Greater Spokane Incorporated.

As envisioned, the device will be about the size of a shoebox, to make it transportable and easy to store in the home, with consumers purchasing test cassettes off the shelf as needed, says Bandaranayaka.

“That really is a field that is developing right now,” he contends. “For heart failure, it’s not there yet, but (last week) the U.S. government contracted an Austrian company for at-home COVID-19 testing.”

A cost estimate for the Photon Biosciences device hasn’t been determined yet, he adds.