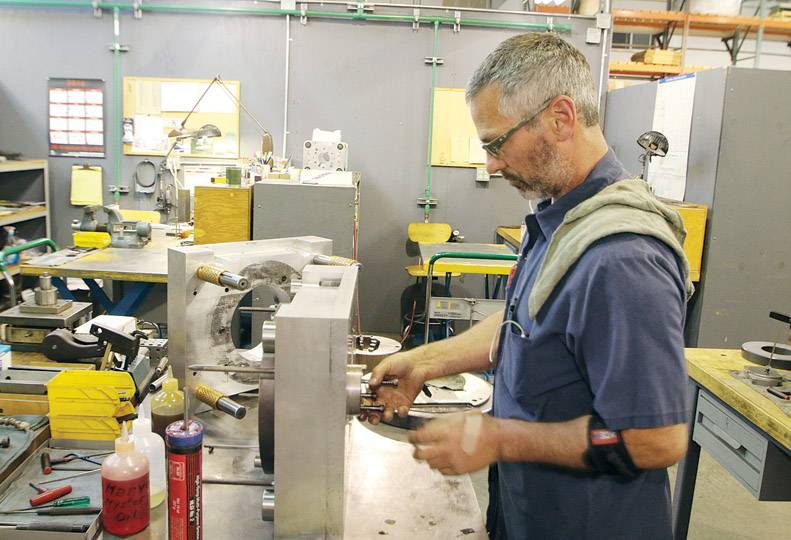 -—Mike McLean
Toolmaker John Minor works on tooling that will be used in a fine-blanking press to form a custom metal parts. As of earlier this month, the company had grown to 10 employees. 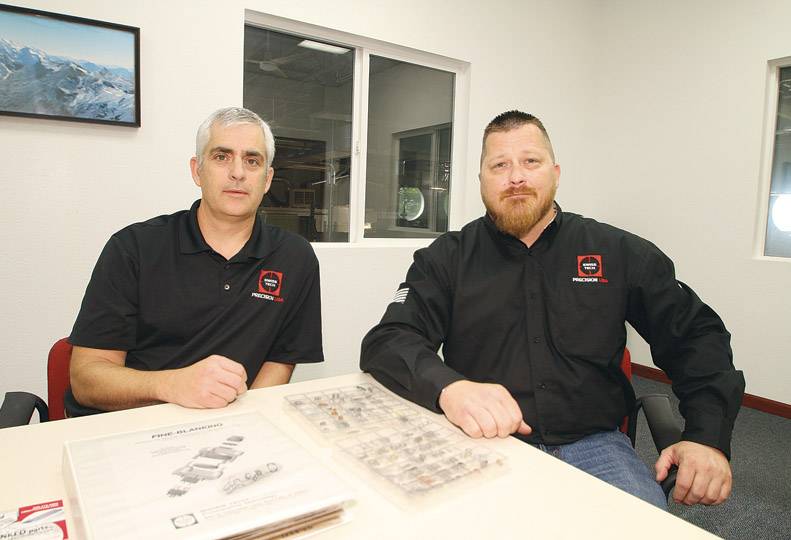 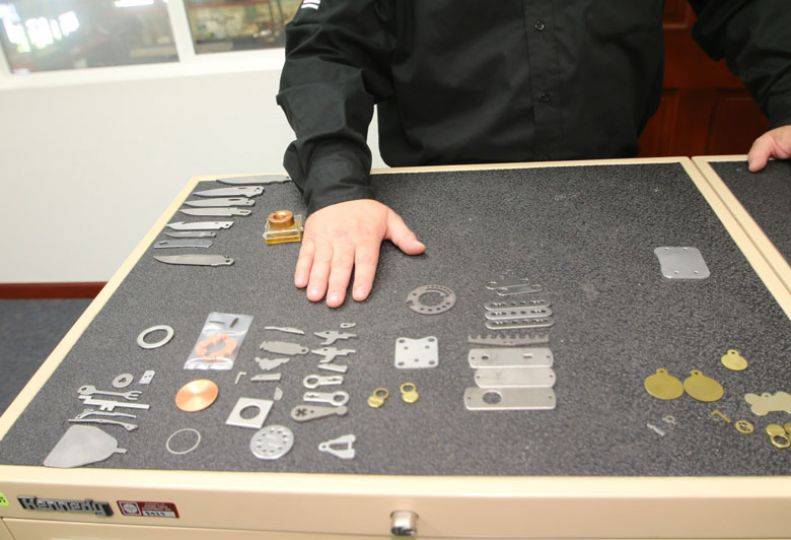 Swiss Tech Precision USA, a Post Falls company that makes critical metal parts that other manufacturers use in a variety of products, is regaining strength largely through reshoring efforts of its U.S. customers, says Christopher Mark Choate, who bought Swiss Tech last June.

Choate says the company has doubled production in less than a year and he expects to double production again within another year.

Swiss Tech had six employees when Choate bought the company, down from 38 at its peak in Post Falls.

As of earlier this month, the company had grown to 10 employees, and Choate says he also hopes to double the workforce within a year.

“I want to keep high-paid, high-skilled labor in the area,” says Choate, who has 22 years of experience in manufacturing management in the Inland Northwest. “Our goal is to bring back highly skilled manufacturing with a focus on reshoring projects. We want to generate business and generate positions so people can have higher quality of living.”

Reshoring refers to the effort to bring outsourced services and workers back to the U.S. from outside of the country and overseas.

“The biggest cost is the loss of loyal customers who are willing to pay a few cents more for American-made parts,” he claims. “It costs 20 times as much to acquire a new customer as it costs to maintain a loyal customer.”

Fine blanking is a process used to form parts by flattening and compressing the metal workpiece with upper and lower pressure that extrudes the part, as opposed to a conventional metal-forming method of stamping and punching, which fractures the part from the source metal.

Fine-blanked parts have smooth, precise edges and can be finished, if needed, through automated deburring and polishing processes, while stamping often requires a secondary operation to clean up the fracture zone on its edges.

Holes and other features often can be formed in the part in the fine-blanking stage, while they would have to be drilled or cut in a secondary operation on a stamped part.

Because stamping tends to bend the part near the fracture zone, the process also leaves a higher degree of variance from one part to the next, Choate claims.

“Fine blanking forms the exact same part every time you stroke the machine. It also maintains perfect flatness,” he asserts.

The company has four fine-blanking presses operating daily, with a backup press reserved for special or high-priority orders.

The presses are capable of applying 25 to 200 tons of pressure evenly on opposite sides of the workpiece, forcing the metal into a die to form the part.

Presses usually form one part per stroke. Depending on the size and material of the part being formed and the hardness of the source metal, the machines can stroke 50 to 160 times a minute, Choate says.

Combined, the machines have a production capacity of 2.5 million parts per month, he says.

Customers usually supply source metals in the form of rolled strips called coils, and individual parts made from them typically cost under 20 cents when formed in high volumes, Choate says.

Swiss Tech can make some parts to within 2 microns of tolerance, he says, explaining that a typical human hair is 100 microns wide.

While Swiss Tech welcomes new and emerging manufacturers as customers, a lot of Swiss Tech’s growth is fed by reshoring initiatives by American companies.

Scot Frazer, Swiss Tech’s vice president of sales and marketing, says, “Our job is to find a way to make it economical.” He adds that the company competes against 30-cent U.S. hourly labor paid by some Asian manufacturers.

“If you have a high-volume, two-dimensional part, we can probably lower the cost,” he says.

Choate says the company’s first sales call after he bought Swiss Tech was to Buck Knives Inc., a the prominent knife manufacturer that moved into the Riverbend Commerce Park from Southern California in 2003.

Swiss Tech now makes blade blanks for several knife models, and is working on a new blade designed for one of Buck Knives’ future models.

Fine-blanking technology was developed in Switzerland for watchmaking nearly a century ago. Swiss-born immigrant Andreas Schneider moved to the U.S. more than 30 years ago, bringing his fine-blanking expertise and founding Swiss Tech, in Southern California.

While fine-blanking technology originally was developed to make precisely flat parts, such as watch gears, not all products Swiss Tech forms are flat. Some tiny parts have pegs, flanges, offsets, or beveled edges, although they’re made in one operation from a single piece of metal.

“We bill ourselves as small parts experts,” Choate says.

Frazer, adds, “What makes us stand out is we’re not afraid to do complicated parts that some of our competitors don’t even want to quote.”

Swiss Tech designs and makes its own hardened-steel, fine-blanking tools that form the parts when installed in the presses.

In all, it typically takes five weeks from the initial order to part production, he says.

“We doubled tooling and production within a year, and we’re on path to do that again next year,” Choate says. “We have six tools going on (in design) now that will equate to 1 million parts a year. As tools come on line, that’s when we start employee growth.”

Once Swiss Tech has created the tooling and run a part, it can fulfill repeat orders quickly.

“For some customers, we keep a spot open and can ship (within a day),” Choate says.

One longtime repeat production run is for a credit card-sized metal plate with notches and holes that Swiss Tech makes for Scottsdale, Ariz.-based Fender Musical Instruments Corp., for its Stratocaster guitar.

Frazer says Fender hasn’t rejected a single part manufactured by Swiss Tech in the nearly 30 years the guitar company has been a Swiss Tech customer.

Swiss Tech also has equipment for electrical discharge machining, which it uses to make fine-blanking tools and intricate parts.

EDM creates high-temperature sparks in a precise path to shape metal by melting fine portions of the work piece. The process is useful in toolmaking because it can cut extremely hard, heat-treated material to the tightest tolerances.

EDM also can cut delicate shapes and features for parts that couldn’t be made under the stress of conventional machining.

Swiss Tech often makes parts for manufacturers that compete directly against each other, and customers often require confidentiality agreements.

“We work with a lot of cool industries,” Choate says.

Frazer adds, “And we see a lot of cool stuff we can’t talk about.”