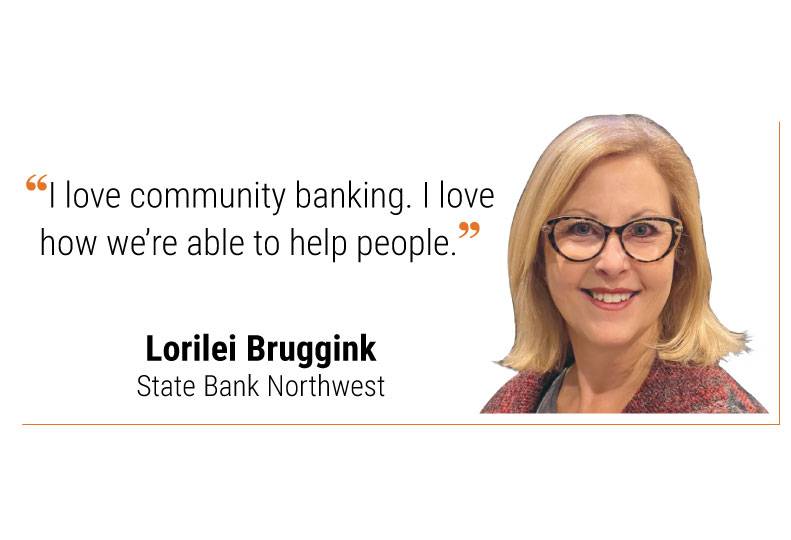 The banking field hasn’t lost its luster for Lorilei Bruggink, who has worked in the industry for 35 years and was named president of Spokane Valley-based State Bank Northwest earlier this month.

She works in the bank’s headquarters at 12902 E. Sprague, in Spokane Valley. The three-level, 11,800-square-foot building also houses one of State Bank Northwest’s three branches. State Bank Northwest’s other branches are located at 9727 N. Nevada in north Spokane, and at 301 W. California, in Garfield, Washington, 55 miles south of Spokane.

The bank originally was founded in Garfield in 1902 as The State National Bank of Garfield. It offers agricultural, business, and consumer banking and commercial and residential mortgage services.

Last year, State Bank Northwest started 2020 with about $150 million in assets. That figure rose to about a high of $215 million before concluding the year at about $190 million, says bank CEO and board chairman Greg Deckard.

State Bank employs a total of 31 people, with two-thirds of them working at the Spokane Valley branch, Bruggink says.

“We’re a small business bank mostly, and with technology that we’re afforded anymore, we really don’t think we need to have a branch on every street corner,” she says.

The bank sticks to its organic growth model with a desire to stay independent, she says.

Deckard, Bruggink’s boss, has high praise for the new president, who also is the bank’s chief operating officer.

“I’ve known her for my entire banking career,” Deckard says. “She’s been a vital part of our growth and development.”

With the new title, however, Bruggink says she won’t be inheriting any additional duties at the bank.

“I think it’s more a recognition for the job I’ve been doing,” she says. “Greg has been a great mentor. I couldn’t have asked for someone any more supportive of my career growth.”

“To have been given the opportunity to buy into the bank was very exciting,” she says.

Long before the start of her banking career, Bruggink was introduced to finance matters by her father, who was an ordained minister during her childhood.

“When I was a kid growing up, one of my jobs was to balance my dad’s checkbook,” she says. “That’s kind of what got me into thinking about a career in banking.”

A Central Washington University graduate, Bruggink has a bachelor’s degree in business with an emphasis in finance. After graduating, she accepted a job in 1985 as a teller at a Farmers & Merchants Bank branch.

She says working as a teller was an ideal starting point for her as it exposed her to a wide range of customers while touching nearly every department the bank had to offer. In a short time, she took on other positions in loan support and operations.

Bruggink then left Farmers & Merchants where she took a job at Seafirst Bank working in its mortgage department.

“It was a much, much, bigger company,” she says. “I was there for nine months and Farmers & Merchants gave me a call and asked if I would like to come back.”

She says she immediately accepted the offer.

“I quickly learned that I liked community banking,” Bruggink says. “It’s a totally different environment from a large financial institution.”

At Seafirst, which was acquired by Bank of America Corp. in 1999, employees were largely tied to their respective departments and didn’t have exposure to other areas of the bank, she says.

“I was doing mortgage lending and that’s all I did,” Bruggink says. “At Farmers & Merchants, I got exposure to everything.”

Upon returning to Farmers & Merchants, she picked up where she left off: helping to oversee the information technology department, branch operations, and loan support.

“That gave me a lot of exposure to the board and senior management at Farmers and Merchants,” she says. “I learned a lot about banking in general.”

It was in 1985, during her first stint at Farmers & Merchants, when she met Deckard, who was already working for that bank.

Deckard eventually left for Inland Northwest Bank and the two maintained a professional interaction in the years to follow. Deckard’s next stop after leaving INB in 1999 was State Bank Northwest.

By the early 2000s, Bruggink had risen to the title of executive vice president of retail banking and operations. Meanwhile, Farmers & Merchants was growing quickly and resembling less the small community bank model that first defined it.

In 2004, Deckard called Bruggink unexpectedly to tell her he was searching for someone who could oversee State Bank Northwest’s operations department.

“I thought, you know what? This is another opportunity for me to continue to expand my career,’’ she says. “I kind of felt like I was at the top of where I could go at Farmers & Merchants.”

With all the changes she’s witnessed in the Spokane-area banking landscape, Bruggink says she is grateful for where she is at this point in her career.

“As a community banker, I’m most proud of our team effort to help our business customers during this difficult time,” she says.