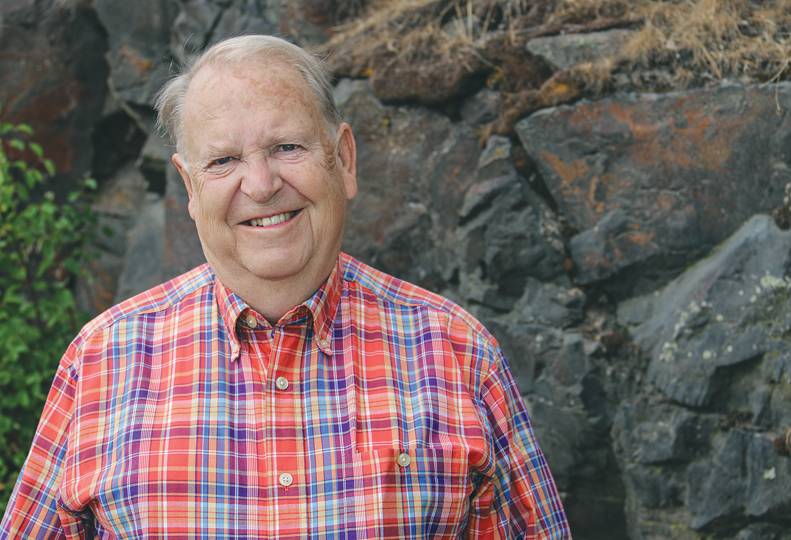 Bernardo says planning for the departure of his partner has long been in progress.

"We have an ownership transition plan and have been grooming certain people in the office to take on those kinds of responsibilities," Bernardo says.

"That would give them a vehicle in which they could offer stock ownership to some of the junior folks," Wills says. "They've done that recently, and now we have associate principals."

Wills says even as the two set up their architecture firm, they understood they would have to plan for the future.

"That was one of the first things we said we needed to take care of back when we started the business," Wills says. "We realized that we needed some sort of plan in place so that if the business grew, there would be opportunities for younger folks to come on board and want to stay on board. We wanted to establish a firm in Spokane that was going to last."

Wills has spent about 50 years in the architecture field. After encouragement from a high school teacher, he attended the University of Southern California to obtain his bachelor's degree in architecture.

At the time, the Vietnam War was raging on. Wills says his draft board begrudgingly allowed him to complete the five-year degree.

"But I knew that my name was pretty high up on the list and that I would be drafted," Wills says. "In lieu of being drafted, I chose to take the Air Force aptitude exam, and I scored high on their pilot proficiency testing."

Later, in the early 1970s, he wound up at Fairchild Air Force Base and has remained in the Spokane area since.

After he left the military, Wills started going door-to-door to Spokane's architecture firms, searching for a job. In 1973, he started working for Spokane architect Warren Heylman, the designer of the Parkade Plaza Parking Garage, Spokane International Airport, and Cathedral Plaza Residential Tower. He was there for 19 years, during which time he met Bernardo, and the two hit it off.

While at Heylman's firm, Wills was involved in projects at Spokane International Airport, where he worked on the design of projects that expanded the ticket and baggage claims, created a sky bridge to the parking garage, and expanded the traffic rotunda.

In 1991, Bernardo and Wills started their own firm. Bernardo Wills Architects quickly outgrew its tiny office space in the Tomlinson Black Building in downtown Spokane.

Now, the firm is located at 153 S. Jefferson, where 45 employees work on a variety of projects.

It's the firm's ability to design projects for both private and public sectors that has been key to its success, Wills says.

"It was easier for us in the very beginning to do private-sector work, which really was what Gary focused on," Wills says.

"It was a great match between Gary and myself, because you'll find that from year to year, one sector is a little more prosperous than another sector, and you need to have that balance in order to sustain your business," Wills says.

Bernardo says, "As a studious problem-solver, I think he enjoyed those deep dives into some of those more technical projects."

Wills says he enjoyed the variety of work he handled.

"You have the opportunity to work on medical facilities one week, and the next week you're working on an educational project, then an airport, then a military project," Wills says. "Every one of those has a completely different set of requirements. It's fascinating to be able to understand a little bit about what your clients do day in, day out."

Bernardo says the general public might not be as familiar with some of Wills' work, because he regularly handled classified projects.

"A lot of the work he was responsible for is on military bases," Bernardo says. "That has a tendency not to be on the front page of the magazines and the newspapers."

Wills says his Air Force experience gave him an advantage when it came to military clients.

"Because of my knowledge, having been in the service and understood their work protocol, it was easy for me to understand what they were trying to achieve in their projects," Wills says.

One such local project is the child development center at Fairchild Air Force Base.

A more recent project Wills says he enjoyed was the design for the Spokane County Medical Examiner's Office facility.

"We used a consultant from the East Coast who's quite recognized in the forensic medical sciences for creating state-of-the-art facilities," he says.

It was gratifying to help create a facility that is well-equipped for emergencies and growth, Wills says.

As he heads into retirement, Wills says he hopes to learn to relax. For him, that means working on his British-made classic cars and spending afternoons lakeside at the home he designed and built on the shores of Liberty Lake.