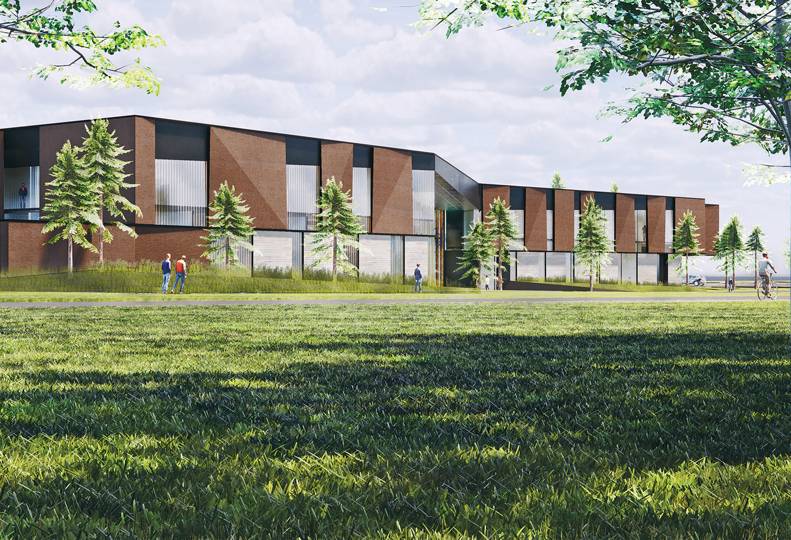 -—ALSC Architects PS/HDA Architecture
Spokane Falls Community College is in the planning stages for construction of a new, $40 million arts building at its campus in northwest Spokane. Work on the envisioned 57,000-square-foot structure could begin in the spring of 2020 and be completed in the fall of 2022, pending funding from the Washington state Legislature. Once it’s completed, about 75 employees will be based in the building, which has been 12 years in the making. 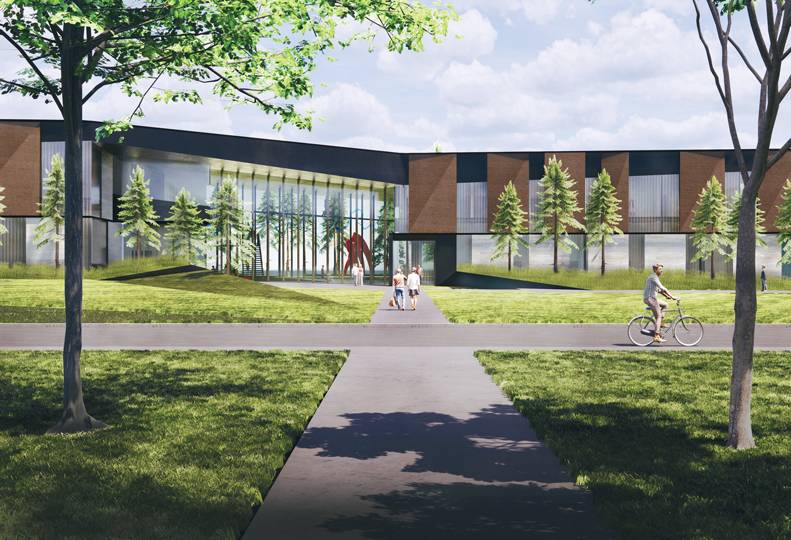 -ALSC Architects PS/HDA Architecture
The new arts building at Spokane Falls Community College is proposed to be constructed on the north side of the campus.

The project is still in the planning phase, says Clint Brown, director of capital construction for the Community Colleges of Spokane.

The hope is for construction to begin in April or May 2020, with an expected completion date in September 2022, should the project receive full funding from the Legislature’s supplemental budget.

The building will be located on the north side of campus, says Brown, on the bluff, just to the north of the campus library.

The project has been 12 years in the making, Brown adds.

Initial planning began in early 2007, before the recession hit, and then the college encountered problems receiving funding through the Legislature’s regular budget, each time just missing the cutoff date or barely not making the list of projects to receive funds.

“So, they’re trying to get us in the supplemental budget, which is the even year budget cycle, and we’re hoping to get funded by the Legislature in April,” he says.

About 75 employees will be based in the building, including full-time and adjunct professors, Messina says.

The building will include classrooms, multiple studio spaces, a gallery, and an event center, says Brown.

He asserts the building will be visually pleasing, with large floor-to-ceiling windows on each side of the building allowing for natural light.

People approaching the building will be able to see through to the other side, with the intent of the design to bring the natural surroundings into the space.

“The building itself is basically an artistic vision,” says Messina.

The exterior will use a mix of brick, glass, stone, and metal materials.

“It’s going to be an art building not only in name but in function,” says Brown. “They’re designing it as an art facility.”

The project is a design-bid-build, says Brown, so the college will send the project out to bid once it receives full funding.

Brown says that the building is being designed and will be built with the intention of meeting LEED silver certification standards.

Building to LEED standards is required for large state-funded projects.

Each studio space also will have its own ventilation system, Brown adds, to accommodate the varying needs of each artistic discipline.

The college also has commissioned a local artist to create a custom piece of artwork to be displayed in the main entrance of the building.

The current concept is the use of dichroic glass — which changes colors when the light hits it — in the shape of the Spokane River; however, Brown notes that could change as designs are finalized and the building design evolves.

“We are really known in the community for our arts, and we do have the state’s only associate fine arts degree,” asserts Messina. “So, it’s really a jewel in the crown of the college.”