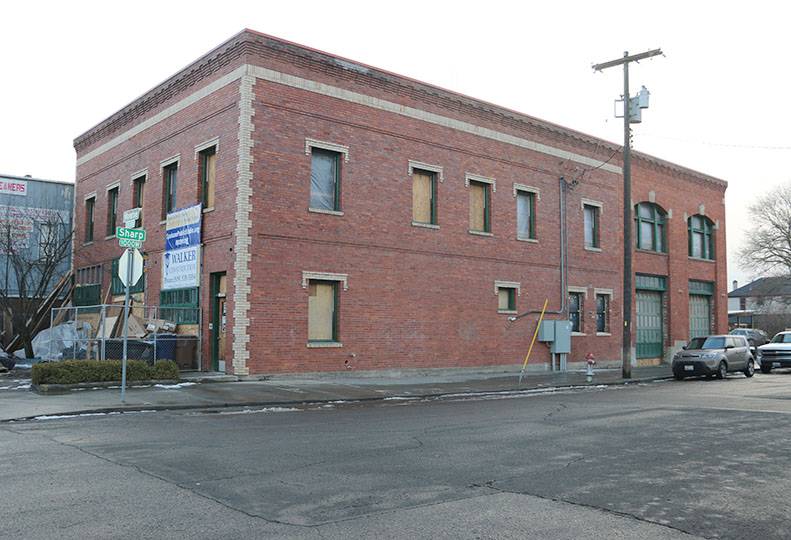 -—Judith Spitzer
Spokane Public Radio plans to complete renovation work on the former Fire Station No. 3 building and move there by June 30.

On the eve of Spokane Public Radio’s 35th anniversary, renovations of its future home at former Fire Station No. 3 on North Monroe Street are on schedule, and the station has secured most of the $5 million needed for the project, says Cary Boyce, SPR’s president and general manager.

Boyce says the nonprofit station that operates as KPBX-FM 91.1, currently located at 2319 N. Monroe, only blocks away from its new digs at 1229 N. Monroe, is in a race to finish the construction by June 30. A state grant mandates the project’s completion by that date.

“We have nearly the entire $5 million secured, though some of it is parked in future receivables and pledges,” Boyce says.  “We’re hoping to raise $175,000 to activate the state match with a special one-day fund drive on January 22.”

SPR has been awarded a total of about $1.75 million from the state of Washington, the National Endowment for the Humanities, and a grant from the M.J. Murdock Trust. Other funding has been raised from private gifts and from SPR listeners.

Spokane-based Walker Construction Inc. is the construction company for the project.

“Walker Construction has completed most of the main structural stuff. They are framing offices and studios, and pulling data cable now,” he says. “The work is 60 to 70 percent complete.”

Work on the project started last May. Early on in the process, Boyce says, some critical seismic upgrades unexpectedly had to be completed and an outside support column needed shoring up, he says.

“The construction company had to reinforce the footing the building sits on, and how the roof and flooring joists were tied—or rather not tied—into the walls,” he says.

Boyce says the seismic upgrades have been completed, but they were time-consuming and expensive surprises. “We have taken steps to scale back plans, so we’re still within our projected budget,” he says.  “We may have saved an iconic historic property from some future seismic event.”

Boyce says the seismic upgrades cost about $300,000, but says the station made up the money by doing “nips and tucks” to other features in the building.

Fire Station No. 3, a vintage brick building which appears on the National Register of Historic Places, was built at the southwest corner of Monroe and Sharp Avenue in 1912 in two stages.

The first part of the structure, which faces Sharp, originally housed a machine shop that built and repaired fire equipment and vehicles. The east-facing part of the building, constructed in 1917, replaced a late-1800s wooden structure, and the two brick structures were joined.

Once renovations are finished, the two-story, 11,250-square-foot structure will have updated broadcast studios, new production facilities, a 40-seat performance venue, and a recording studio to serve as a community hub for broadcasts, concerts, forums, debates, and other events. The building will double as SPR’s working space and triple its production capacity.

Boyce says the station’s news bureau is insufficient for its 20,000 square miles of coverage, but says initiatives are underway to expand it.

“We’re expanding our news department through an internship program, to add reporters and perhaps expand reporting as resources allow,” he says.

“Reports from the legislative session in Idaho will be available shortly as well,” he says. “We’re looking to expand the kinds of reporting we do as well, and not just spot reports.”

Boyce says the radio station ultimately will be operated by students, at least part of the time, as a training ground for the next generation of public radio professionals, including journalists.

“We’re looking at ways to partner with local and regional schools and programs to build out internships in journalism. Hopefully, we can expand this once we build the model.  It will take some time, but we’ll get there,” he says.

Ramping up coverage of the arts is also high on the priority list for future growth, Boyce says.

“The new performance studio will help immensely with this, as it will really improve our production and recording capability for days when visiting artists and ensembles stop in,” he says.

The station covers the classical music scene, including the Northwest Bach Festival, the Spokane String Quartet, and choral groups from local colleges, as well as an increasing number of music festivals in the region. Those concerts include the Walla Walla Chamber Music Festival, the Icicle Creek Winter Piano Festival in Leavenworth, and the Montana Baroque Music Festival in Paradise, Mont.

The Spokane Fall Folk Festival, and the KPBX Kids’ Concerts, a series of free one-hour concerts, are programs that complement the station’s on-air programming, Boyce says, adding that the music programs have brought different genres of music and performances to generations of children.

“And now there is considerable interest among Washington and Northwest (public radio) stations in developing regional syndication for these programs so our listeners know what’s happening in our region—and so we can take them to a national stage later.  The new station will provide opportunities to bring and produce national programs here in the future,” he says.

“It’s working—we are hearing more news and information coming from California, Oregon, Idaho, Montana, and of course Washington, and the Midwestern states—rather than a preponderance of stories from Washington, D.C.; Boston; and New York.”

Boyce says an initiative is afoot to strengthen national reporting through NPR affiliate stations like SPR, adding that the effort is still in the beginning stages.

“We are also taking part in a national effort to increase listening to Morning Edition. You’ll hear more nationally produced spots on that, and I’m curious to hear what our listeners think,” he says.

NPR has focused more resources on digital development, with a concentration on mobile development to put the news and public radio content on more platforms. He says he and other leaders are concerned that print organizations are losing journalists and circulation across the country in astounding numbers.

“Public radio, as one of the most respected news organizations in the country, is working to fill the gap,” he says.