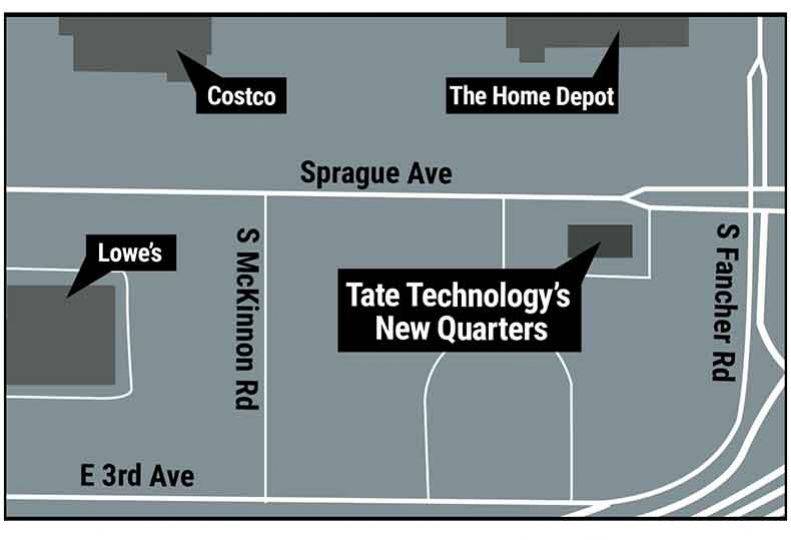 Spokane-based electronics manufacturer Tate Technology Inc. plans to relocate to larger quarters in Spokane Valley in August, following the completion of a $800,000 renovation project at its new facility.

Tate Technology currently occupies 10,500 square feet of space in a building at 3102 E. Trent., which is in the path of the envisioned North Spokane Corridor.

Tate says the Washington state Department of Transportation served an eminent domain notice in 2018 informing the company that the department intended to acquire the property as part of the freeway project.

At its planned new facility on Sprague, Tate Technology originally had intended to occupy about 16,000 square feet of the space and lease the remainder, but the company since has decided to use the whole facility for its operations, Tate says.

“Our first reason for the move was that our current building is scheduled for demolition due to construction of U.S. 395; the second reason is that we really need more space,” he says. “As we plan for that growth, we’ll be adding more equipment and likely more employees. In the past, we’ve had to turn down certain opportunities because we didn’t have the space to accommodate them. This new facility will enable us to say yes to more of those, which is exciting.”

“Renovations can be complex, especially when you’re talking about modifying an existing structure to accommodate building electronics,” he says. “We basically started from a clean slate of four walls and a roof, which did make things a bit easier.”

“The renovations will likely cost us a total of around $800,000 and moving everything to the site will be an additional $200,000,” he says. “We plan for renovations to be completed in July, so we can move in by August and follow that with a community open house event in September.”

Tate Technology, which has 46 employees, provides consignment and “turnkey” electronic manufacturing for various industries. It also creates prototypes as well as produces and assembles large quantities of circuit boards.