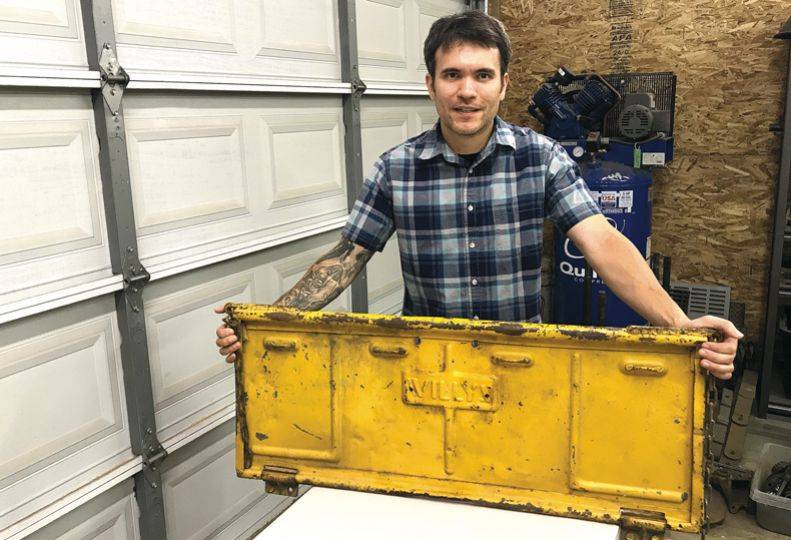 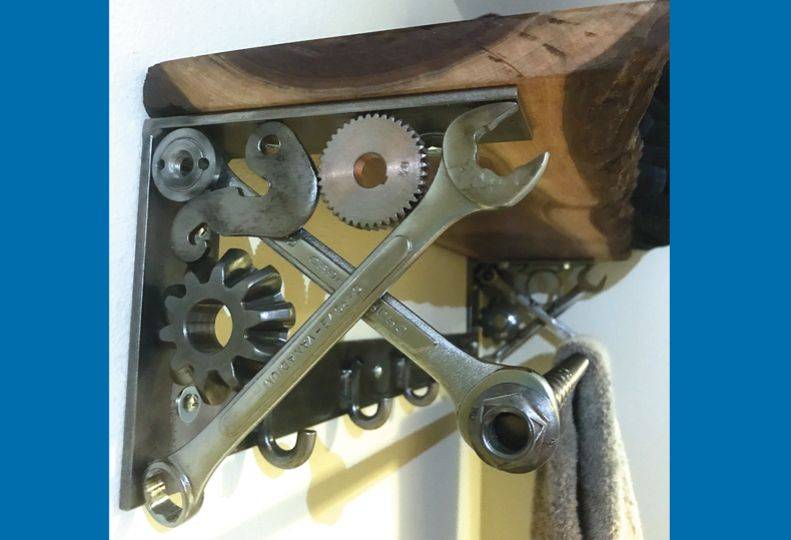 Where most people see small tools and old car parts, Lloyd Morris sees a lamp, a shelf bracket, or a bench.

Morris has built his new business, Tomahawk Steelworx, around repurposing old metal into furniture and other items.

He’s used wrenches and gears to create shelf brackets, turned an old Ford pickup tailgate into a bench, and uses brake rotors and axle shafts to make lamps. The result is a unique, retro look that appeals to even non-car enthusiasts.

Morris, now 35 years old, began working on cars when he was 16 and often thought about learning welding. He joined the Army and served five years, then went to school to earn an MBA from Virginia Commonwealth University because he knew he wanted to own his own business. He thought he might open a car repair shop.

Then he took a welding class as a hobby and was instantly hooked.

“It just clicked for me,” Morris says. “This is what you’re supposed to do.”

Morris, whose wife is from the Spokane area and has family here, moved to Spokane Valley from Virginia in 2016 and started getting his shop ready. He brought his website at www.tomahawksteel.com live in September and also earned a metal fabrication and welding certificate at Spokane Community College.

Spokane is the perfect place for his business, Morris says.

"There’s so many cool old cars here,” he says.

Old car parts are neatly stacked in his shop. A large set of shelves holds multiple clear plastic bins containing small car parts and other odds and ends. Morris says he often just looks at what he has to get inspiration for new creations.

“I’ll come over here and just sit here for 30 minutes,” he says.

He has a collection of pickup truck tailgates in his shop ready to turn into benches. One, a small yellow Jeep tailgate, he plans to turn into a fold up bench mounted to the wall near his front door.

Morris says he spends a lot of time at local junk yards and yard sales looking for old metal in whatever form it might be.

“Half my job is being a picker,” he says. “Sometimes I’m looking for something specific. I’ll go to Pull & Save for fun and just start looking around.”

He also makes custom projects on request. He recently built a Star Wars X-wing fighter out of spark plugs, plug sockets, and fuel injectors. The wings of the realistic-looking fighter even fold together like they do in the movies.

Morris recently built a "Terminator" arm for a member of his extended family.

“That was a lot fun, building that one,” Morris says. “The fingers actually move. We’re all adults, but it’s still fun to play with it. I want to build another one for myself.”

He also has started working with live edge wood, which is wood with the bark still attached. When a finish is applied it looks beautiful, Morris says. “It’s the wood equivalent of what I’m doing with metal,” he says.

He has included adjustable shelves made with live edge wood on some of his lamps.

His prices vary depending on the project. His lamps are $200 and shelf brackets are $50 a pair, though Morris says he’s had people buy them to be sturdy bookends. The custom X-wing fighter was $400.

“I want to make it affordable,” he says.

Morris doesn't have a storefront, but examples of his work are posted on his website. He will have a booth at the Garland Street Fair on Aug. 11 and will be at the Early Ford V-8 Swap Meet at the Spokane County Fairgrounds July 13-15.

The one thing Morris hasn’t figured out is how to describe himself. His business cards give him the title “Maker of Stuffs.”

“I guess in a sense I’m a scrap metal artist,” he says. “I’m not even sure if I consider myself an artist. I just like to build stuff.”