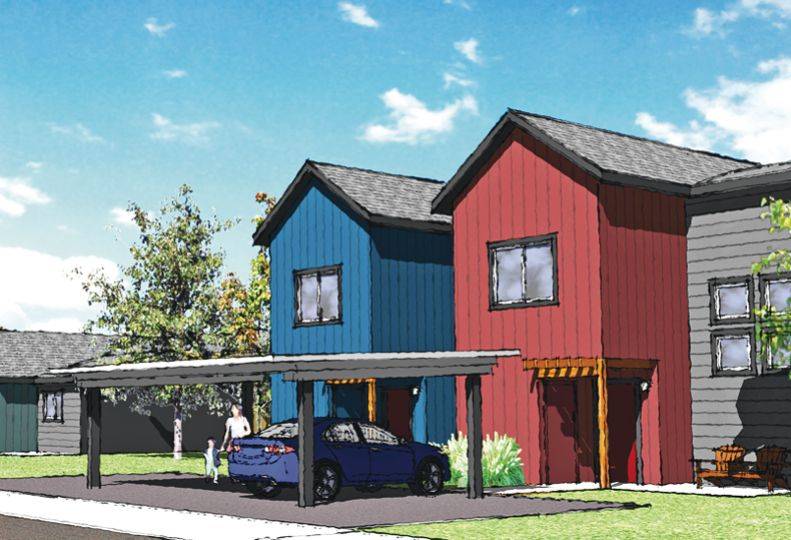 -—ZBA Architecture
Construction of Arrowleaf Townhomes is expected to get underway soon along Whitetip Avenue in Airway Heights.

Two townhome projects worth at least a combined $4 million are being constructed in separate neighborhoods in the Spokane area.

One townhome project, called the 35th Avenue Commons, is planned for 2727 E. 35th Ave. The townhomes will be owned by SMY LLC, a group of three investors that includes John Moloney, of Moloney+O’Neill insurance brokerage. Moloney declines for now to disclose the names of the other investors.

Moloney says he intends to finance the entire $2.6 million project himself.

The site is being excavated now, Moloney says, but construction might not be completed until spring, partly due to the ongoing shortage of construction workers.

“We don’t know if we’re going to be able to get it all before winter,” Moloney says. “We’ll start with footings in September. If we can get it closed in before the snow flies, we’ll do so. If not, we’ll wait until spring.”

No contractor has been selected, but Moloney says one of the investment partners has ties to the construction industry and will oversee contractor selection later in the year.

Moloney says plans for the development haven’t yet been solidified, but the project is likely to have four two-story buildings and between 18 and 20 units. Living units will have between 1,200 and 1,600 square feet of floor space and will have either two or three bedrooms. Each will have its own one-car garage and patio, and a small common area will provide additional green space for tenants, Moloney says.

Another townhome project, called Arrowleaf Townhomes, is planned for Whitetip Avenue in Airway Heights. The project will consist of 71 units of affordable multi-family housing, says Margaret Graham, communications manager for the Washington State Housing Finance Commission. Six units will have one bedroom and 17 will have two bedrooms. The remaining 13 will have three bedrooms. Three of the units will be designated for assistance through the U.S. Department of Housing and Urban Development’s HOME program.

Graham says the commission allocated $1.3 million in tax credits to Hayden-based apartment developer Whitewater Creek Inc. and its nonprofit partner, Commonwealth Agency Inc. The nonprofit then sold the credits for about $10.8 million in order to gain equity to build the townhomes, Graham says.

Helen Stevenson, vice president of the board of Commonwealth Agency, says tenants will have the option to buy their townhome unit after 15 years.

“The initial tenant can opt in to a homeownership process that will allow them to get financial training, to get first-time homebuyer classes, and to get minor home maintenance training,” Stevenson says. “During the course of the 15 years, should they decide to opt in at initial tenancy, a portion of their rent that we collect will go into a savings account that they can use as part of their down payment in year 15 should they decide to stay in their unit and opt in to purchase that unit at the end of that 15-year period.”

However, Stevenson says that a tenant who opts into the process and then moves out of their unit won’t receive money from the savings account, as it’s a portion of normal rent payments specifically set aside only for those who are in a townhome unit for 15 years.

“I know there have been several new developments in Airway Heights recently, and the hope is that people who are being forced to move out of those mobile home parks will have another option, that this will help create affordable options in the area,” Graham says.