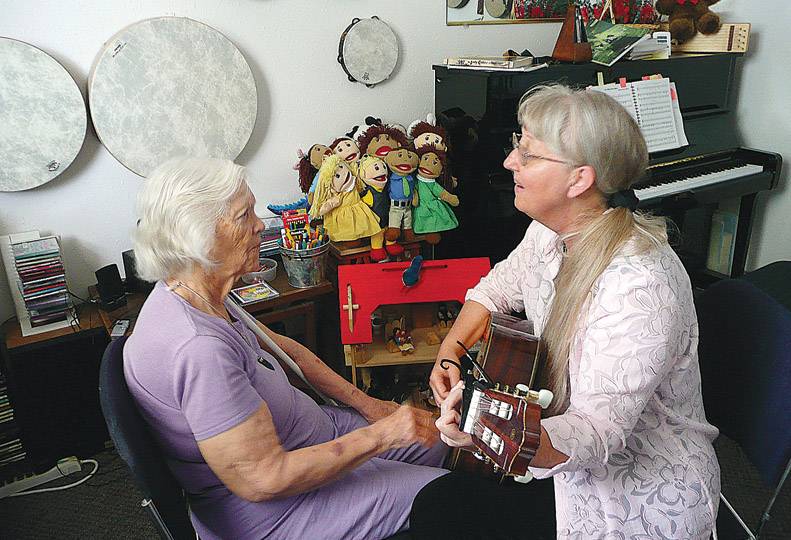 Kim McMillin describes music as her language, one she has helped others become fluent in through her business, The Center for Music Therapy.

Located at 1717 W. Sixth on the lower South Hill, the business offers music therapy as an alternative to conventional counseling, helping clients develop a relationship with music that’s designed to increase their quality of life.

McMillin says she was always drawn to music therapy, because music is a big part of her life.

“Music was my language, how I processed experience in my life, and how I got through my life,” she says. “I learned to use the language of music to deal with anger, conflict, and to communicate my feelings.”

“I was sounding out, playing the piano, and voicing my feelings in this way because there was no other place to go.  When you think about music therapy, you have to understand that it isn’t music education,” McMillin says. “We are not focusing on skill, or making someone play the piano or drum. We are really focusing on giving them a safe space to have a musical experience with someone else.”

Everybody knows about singing and moving, McMillin contends.  Everybody has a rhythm, and everybody has some relationship with music, she says.  A music therapist can help them sound out what is going on with them in their unique way. It doesn’t usually sound like a concert; she says it’s usually ugly sounding but it’s beautiful when a nonverbal person communicates through music.

According to McMillin, traditional counseling is helpful for most, but artistic, sensitive people can have a difficult time verbalizing what is going on with them. Using music as a format to write songs about their feelings, play music, and chant offers a different way to channel their emotions.

Professional music therapy is often misrepresented, McMillin contends. It isn’t just listening to music, or celebrities performing in schools or hospitals, or nurses playing background music that a patient might like.  Music therapy is an evidence-based health profession that requires knowledge of psychology, medicine and music, she says.

While music itself can have a profound effect on people on its own, using music as a tool or language to affect change or communicate is more in keeping with the ideas behind music therapy.

“I often sit down with a team of people working with a child, like occupational therapists, caregivers, parents; we identify goals, like social skills, paying attention, eye contact, and expression,” McMillin says. “Each week, I document what is going on, what goals were met, and to what percent they met the goal. It is very scientific, and we reach the goals.  Music therapy is very effective.

“That’s why choosing a licensed music therapist is important. A lot of benefits can be garnered through music therapy if it’s administered properly,” she says.

According to McMillin, music therapists have to register or apply for a license in some states, but not all.

“Requirements are a good thing. It is protection for the consumer because they know the credentials of the therapist they are hiring and for the practitioner so they can be paid and recognized as a health practitioner, rather than just a musician wandering around the city,” she says.

Music therapists don’t have to be licensed psychotherapists, but McMillin feels that it helps, particularly with clients who have dual diagnoses, or people who have co-occurring issues such as mental health and developmental disabilities.

“Co-occurring, now that is the stuff I love, because I am trained to work with dual-diagnosis clients with mental health and developmental disabilities,” she says, adding, “That’s what is different about me. Most practitioners have a smattering of mental health experience but they don’t have a degree in psychotherapy.”

McMillin says she recently worked with an autistic boy who cannot maintain eye contact, can’t focus, and has difficulty with social skills. She says they used an autoharp because it has contact with his body, vibrating and helping him stay present. They made up songs, singing about what was going on with him, then they’d add clapping in a pattern, which is called neurological music therapy. Using the brain and adding physical elements helps him pay attention.

“He watches what I’m doing, and keeps eye contact to see what I’m going to do next,” McMillin says.

She says music therapy is used effectively with kids and adults within the autism spectrum. They can have difficulties with social skills, eye contact, and focus, and music therapy can help improve all of those functions.

“The niche that I want to fill here in Spokane is working with people with developmental disabilities,” says McMillin.

Music therapy is effective for women too, McMillin says, as they have a tendency to overlook their own mental and emotional health because they are caregivers and nurturers.  They spend a lot time fixing their family members’ problems, and often hardly any time working on themselves.

“Daily stressors can create a host of emotional, mental, and physiological issues that can be difficult to communicate, understand, or predict,” says McMillin.