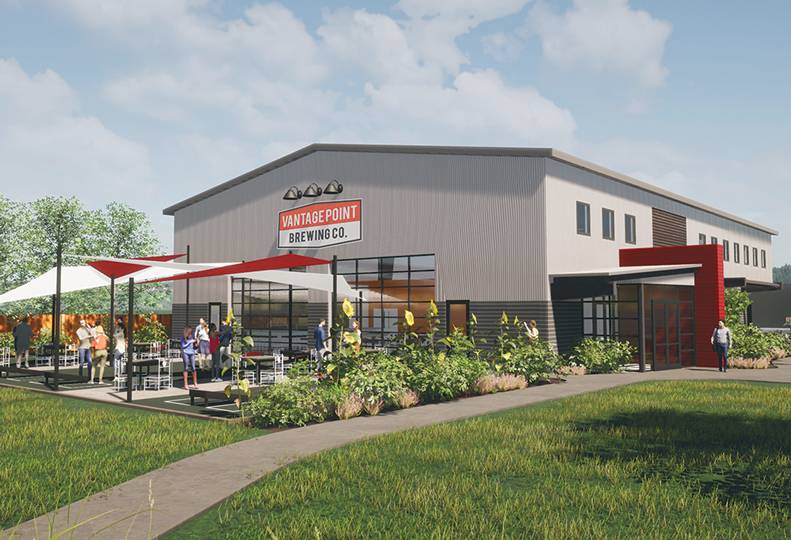 -d’Zign Group Architecture LLP
The envisioned Vantage Point Brewing building will have 7,800 square feet of floor space. The brewery and restaurant are slated to open by Memorial Day 2022.

The owners of Vantage Point Brewing Co. aim to bring a taste of old-world ales to a modern setting in a rapidly growing part of Coeur d’Alene by next Memorial Day.

Site work for the new brewery and restaurant began in mid-August at a vacant lot at 208 E. Coeur d’Alene Lake Drive. Valued at $2.2 million, the planned 7,800-square-foot building was designed by Hayden-based d’Zign Group Architecture LLP. Spokane-based Associated Construction Inc. is the contractor.

Granier says construction of the building is expected to be completed by February.

“Once the brewery is complete, it takes a couple of weeks to brew the beer,” before the brews will be ready to serve in the restaurant, he says.

Granier says he began talking with master brewer and majority owner Kevan McCrummen about opening a brewery in Coeur d’Alene about 15 years ago, when he was taking a business class and McCrummen was contemplating a career change. At the time, both were living in Spokane.

“Kevan is a retired firefighter, and at the time, he was fighting fires,” Granier says. “We always said, ‘well, when we can move to Coeur d’Alene, we’re going to open up a brewery.’”

Granier says he and McCrummen were able to partner with others to start to bring the idea into reality in 2019, though the COVID-19 pandemic delayed construction by a year. The other owners are Adam and Sara Duke, Chris and Alisa Vincent, and Vernon Spaulding.

The brewery will be open and airy, with high ceilings, Granier says.

“We want our patrons to be able to see and have access to the actual brewing process, so that (part of the building) will be opened up for viewing,” he says.

McCrummen earned his master brewer certification about 10 years ago through the World Brewing Academy, an alliance between Munich, Germany-based Doemens Academy and Chicago-based Siebel Institute of Technology.

“Most of our beers are session-style ales,” Granier says, describing them as crisp and refreshing. “That’s what Kevan was trained on, and that’s what he’s looking to do to separate ourselves from other breweries.”

He adds, “We’re not really looking for heavy, mouthy IPAs.”

“We’re looking for simple menus with clean food, clean recipes,” Granier says. “I see us having something in the form of pretzels and some flatbreads, but we also want to offer a few different sandwiches, some salads, maybe one or two entrees that would rotate.”