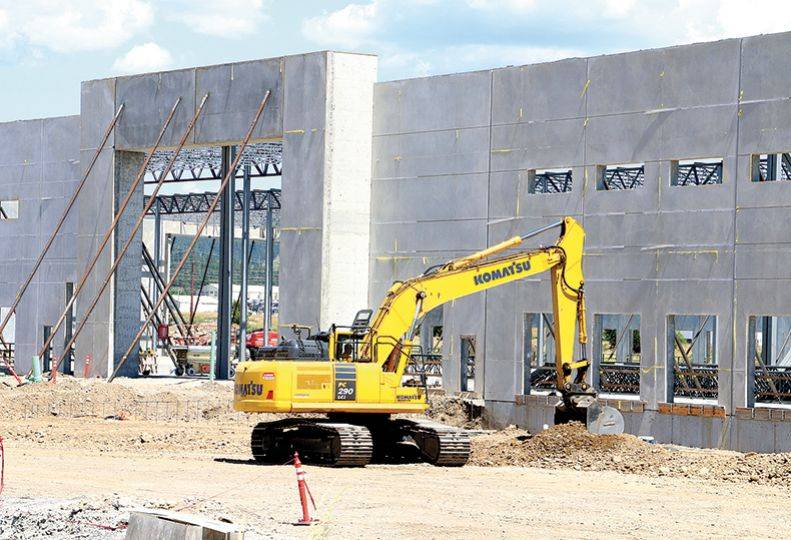 -—Mike McLean
Divcon Inc. is building the first structure in the planned Barker Logistics Center complex, which is rising on the site where Progress Rail Services had envisioned building a plant at one time.

Progress Rail Services appears to have switched tracks regarding its plans to construct a rail manufacturing plant in Spokane Valley, although many other industrial projects in that area have been completed or are in construction or planning phases.

It was five years ago this month that the Journal first reported that the Albertville, Alabama-based manufacturer of railroad and transit system products had purchased 40 acres of land north of the Union Pacific railroad mainline, near the northeast corner of Barker Road and Euclid Avenue.

That’s now the site where the first building of an envisioned industrial park, Barker Logistics Center, is under construction.

Progress Rail, a subsidiary of Peoria, Ill.-based Caterpillar Inc., acquired the site in 2017 from Spokane-based Centennial Properties Inc. for $3.2 million.

The building is expected to be completed in September, says Oliver Lawrence, an asset and development manager for Crown West. A tenant hasn’t been secured for the building yet.

Lawrence says Crown West will begin talks with an architect soon regarding a second speculative building, which will be 70,000 square feet or larger in size. It will be located to the east of the first building at the Barker Logistics Center, he says.

The Journal’s inquiries to Progress Rail for comment were referred to its director of communications, who couldn’t be reached immediately.

GSI then withdrew an application to the Washington state Department of Commerce seeking strategic reserve grants for the project, Ballew says.

While Progress Rail’s plans were shrouded under secrecy through nondisclosure agreements at the time, grant documents submitted to the state four years ago say the site was being considered for a $15.8 million facility with 110,000 square feet of production space, 115,000 square feet of storage space, and a new rail spur for a potential heavy manufacturer of transportation equipment that would have about 150 employees.

John Hohman, Spokane Valley city manager, says Progress Rail had planned to construct a plant to manufacture the rails used in train tracks, although no planning documents were filed for it.

“Then, we didn’t hear from Progress Rail for a number of years,” Hohman says. “We knew they were looking at other areas for expansion.”

Those areas are outside of the Inland Northwest, he says.

“I don’t believe they’re looking in this region anymore,” he says.

The Journal first reported Progress Rail’s land acquisition in the same story that broke news about plans by former design, manufacturing, and construction company Katerra Inc. to build a cross-laminated timber manufacturing plant, which it opened in 2019.

“Katerra was next,” Hohman says, referring to the company’s departure from the industrial area last year after declaring bankruptcy and selling the 253,000-square-foot plant it had built 19202 E. Garland to Vancouver, British Columbia-based Mercer Mass Timber LLC for $50 million, which was a third of the plant’s original construction value.

Despite the Progress Rail and Katerra setbacks, Hohman cites a number of other developments that have brought new jobs recently to the 840-acre industrial area industrial area centered around Barker Road, north of Euclid Avenue, and south of Trent Avenue.