Project eyed for site near city core on hold 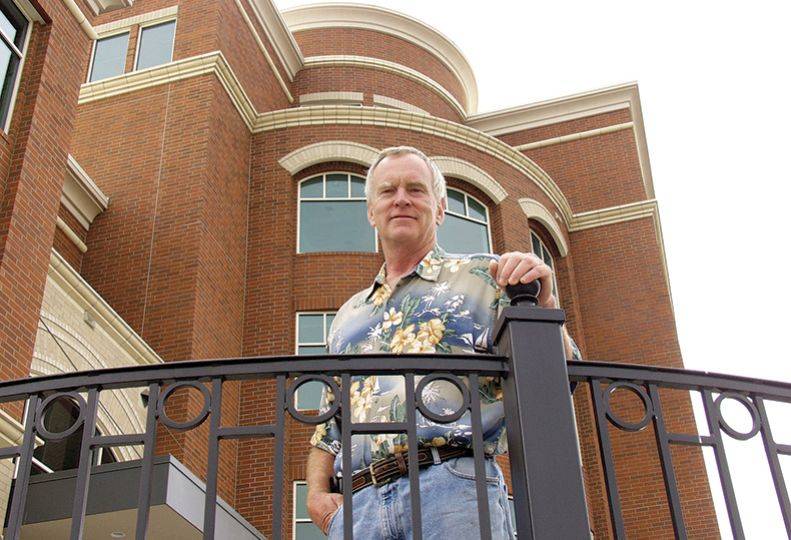 -—File photo
Mick McDowell, pictured here in 2004, considers the building behind him at 41 W. Riverside to be the culmination of his career as a developer in Spokane.

Mick McDowell, one of the most prolific Spokane developers of the last few decades, is down to one commercial holding that he’s in no hurry to develop.

Within the last two years, he and Shelley McDowell, his wife of 35 years, have sold the Banner Bank Building, at 41 W. Riverside, and the Magnolia Care assisted-living facility, at 1707 E. Rowan.

McDowell’s last remaining development plan near the city core, where he has long envisioned a 14-story, 55-unit luxury condominium, is on hold.

“I promised Shelley when we were done with the Banner Bank Building, I would never again go into debt to build anything,” he says.

The dormant development, planned as the 1400 Tower, would be on a half-acre site at 1404 W. Riverside Avenue, on a hillside west of downtown, overlooking Peaceful Valley.

The Journal first reported on the 1400 Tower plans in 2016, when McDowell said he was looking to form a consortium of investors to fund the project with private money.

The tower is planned to have a total of over 78,000 square feet of residential and common areas.

Spokane architect Sam Nystrom drew the initial designs for the project. McDowell had planned for Yost Gallagher Construction LLC, of Spokane, to be the contractor.

The project site is where McDowell had initially proposed a 17-story condo tower before the Great Recession, a project that faced neighborhood opposition largely due to its planned height.

McDowell earlier told the Journal that a protracted legal dispute with the city resulted in a binding site plan enabling him to develop a residential high-rise with a height of up to 150 feet at the site.

McDowell says he’s been unable to raise enough owner equity to build the $40 million project. “It’s going to take someone bigger than me,” he says.

He says he might sell the property if someone approaches him with a similar vision.

He’s not actively looking for a buyer, however. “I don’t need to sell. I don’t have to sell. I’ve got a binding site plan signed by the Mayor and City Council in perpetuity,” he says.

McDowell says the offer from Idaho Central Credit Union to buy the Banner Bank Building came out of the blue.

“Their agent submitted an outstanding offer that was all that Shelley and I could have hoped for,” he says.

McDowell constructed the building at the former Thaddeus T. Thudpucker’s restaurant site in 2004 for $10 million. AmericanWest Bank was the first namesake for the building. American West merged with Banner Bank in 2015.

McDowell says constructing the attractive, all-new, brick building was the culmination of his real estate development career, so far.

In many of his earlier projects he had rehabilitated derelict building shells, converting them to affordable housing, before selling them.

As a developer, McDowell sometimes had a contentious relationship with the city. Spokane County commissioners, however, named him to a seat on the Public Facilities District Board on which he served as chair of the PFD’s $55 million Spokane Convention Center expansion, which was completed in 2015.

Shelly McDowell is the former managing broker for the Spokane office of Coeur d’Alene-based Century 21 Beutler & Associates. Among many other roles in the Spokane Community, she was a founding board member of RiverBank and served nearly a decade ago as the chair of the Spokane Club, a members-only social and athletic club based in the city’s core.

The McDowells now spend six months of the year in the Spokane and Priest Lake, Idaho, areas. Last winter was their second spent in Arizona, where they have a home in a community called Dove Mountain, near Tucson.

In transitioning to retirement, McDowell, 73, says, “I promised myself I would never again spend winters in snow in Spokane.”