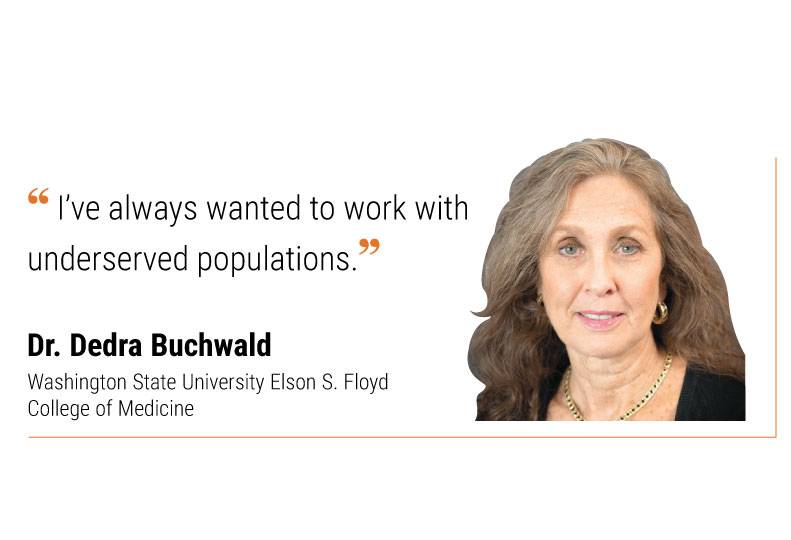 Born to German parents who immigrated to the U.S. at the end of World War II, Dr. Dedra Buchwald says it’s often easy for her to understand some of the issues facing the Native American Indian populations she partners with to improve health.

Buchwald, her parents, and grandmother lived in the attic of another family’s home for two years before securing their own housing, and German was her first and the predominant language in their household, she says.

“I probably had a bit of a different perspective on things than your average American kid,” says Buchwald, now a professor of medicine at the Washington State University Elson S. Floyd College of Medicine. “As long as I can remember, in my professional education and career, I’ve always wanted to work with underserved populations.”

Not only has that work paid off for Buchwald, but it also has reaped dividends for those she and her research teams have helped and will continue to help.

Recently, the National Institutes of Health awarded Buchwald a $4.4 million COVID-19 Epidemiology, Research, Testing, and Services grant to deliver information and resources to help stem the spread of COVID-19 in American Indian and Alaska Native populations.

Buchwald lives in Seattle while serving as a professor of medicine at WSU’s medical school. In Seattle, she also serves as director of the WSU Institute for Research and Education to Advance Community Health, known as IREACH. The institute draws on medical experts from across the state and nation, she says.

At this juncture, Buchwald says she believes few Spokane-based researchers will be involved in the project, primarily because the project sites are scattered across urban areas across the nation.

Under the terms of the grant, the funded work will be a collaborative effort with Urban Indian Health Programs in Seattle; Denver; Anchorage, Alaska; Minneapolis; Albuquerque, New Mexico; and Wichita, Kansas.

Researchers will assess levels of testing and challenges for COVID-19 that prevent urban American Indians and Alaska Natives from getting tested and vaccinated. The project hopes to find creative solutions and fund new resources to increase testing and limit the spread of the virus in vulnerable populations, she says.

“I will say anecdotally that it is possible that we may reach out to the Spokane Native Project at some point,” she says. “But right now, the plan is to work with the Seattle Indian Health Board.”

As Buchwald approaches 30 years of working with mostly Native populations, her biography on Washington State University’s website describes her as being the principal investigator for more than 77 projects funded by National Institutes of Health and other major organizations.

Buchwald is the founding director of the Partnerships for Native Health, considered one of the largest programs dedicated to American Indian and Alaska Native health in the U.S. The program has worked with more than 150 tribal partners and 35 scientists across a variety of disciplines.

The most recent $4-million-plus award gives Buchwald a secured research portfolio that now reaches $75 million. She heads several training programs and has been a mentor to scores of postdoctoral fellows and junior faculty members, many of whom come from underrepresented minority groups.

“Being in the field for a long time, you become trusted if you do things right,” she says. “My husband is Native and many of my collaborators and faculty are Native; it really helps.”

Despite that, Buchwald says it can be challenging to reach communities of people who often have a history of mistrust of perceived outsiders.

“It’s certainly doable,” Buchwald says of establishing trust. “But it’s difficult because of all the historical and contemporary distrust and barriers.”

And, at press time for the Journal, Buchwald says a grant – exclusively earmarked for areas around the Spokane and Fayetteville, Arkansas area – may be forthcoming.

Buchwald says she and a team of researchers are awaiting notification of a grant proposal submitted to National Institutes of Health that would study the effects of COVID-19 on Marshallese and Pacific Islander populations in Eastern Washington.

Marshallese and Pacific Islander populations have experienced infection, hospitalization, and death rates ranging from four to 25 times higher than those of other racial and ethnic groups in the U.S., the submitted grant says.

“Marshallese represent just 1% of the population in Spokane County, but experienced nearly 30% of COVID-19 cases between March and May,” according to the grant application.

Buchwald’s current team of faculty and staff numbers just exceeds 70 people, more than a dozen of whom are WSU faculty members, and they’re located in Spokane, Pullman, and Seattle, she says.

With the WSU Plateau Center for Native American Research and Collaboration, IREACH recently hired a Ph.D.-level faculty member in Pullman, who is a member of the Nez Perce tribe, to begin working with Native undergraduate students to help connect them with professional, leadership, and research opportunities.

Buchwald earned her undergraduate degree in neurobiology in 1976 from the University of California San Diego before earning her doctorate there five years later.

“My parents were always very focused on my getting an education,” she says. “My mother always wanted to be a physician, but she didn’t get a chance. But my parents saw to it that I did.”