Structure envisioned along Glenrose would cost $30M to $40M to build 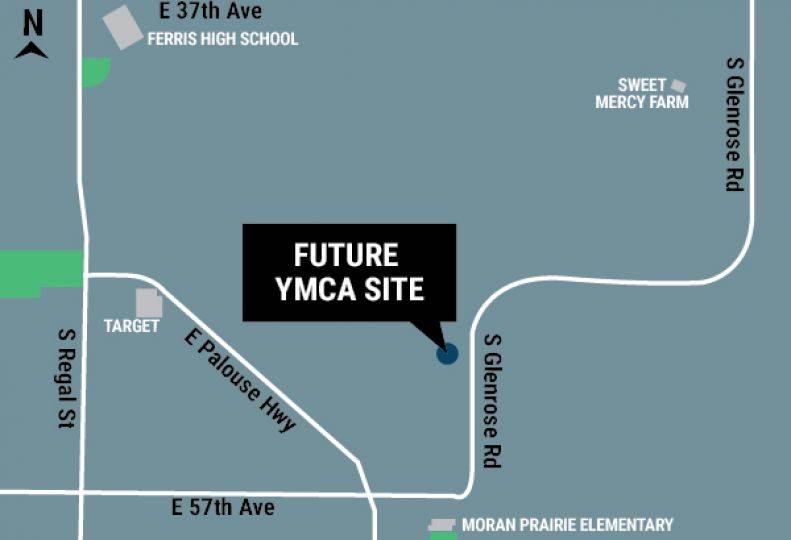 -Rebecca Caligan
The envisioned new YMCA facility would be located on 15 acres of farmland along Glenrose Road.

YMCA of the Inland Northwest has purchased 15 acres of vacant land for $3.4 million in the Moran Prairie neighborhood on Spokane’s South Hill, where the nonprofit plans to build a new fitness facility.

Alan Lesher, president and CEO of YMCA Inland Northwest, says that the new facility, to be located at 5020 S. Glenrose Road, will be paid for with funds from a multiyear capital campaign.

“Typically, we need a full 10 to 15 acres to build a full facility, and we were able to connect with the Bauer family and come to an agreement on that,” Lesher says.

He says the Bauer family, which sold the property, had been farming on the land since the 1930s.

“The purchase is the next step in fulfilling the community’s goal of one day having a full-facility YMCA in south Spokane,” he says.

The organization doesn’t have a set construction timeline yet, but it hopes to open the new south facility within five years.

Depending on the final design plans for the building, Lesher estimates the new facility will cost between $30 million and $40 million.

The facility will be comparable in size to the 54,000-square-foot North Spokane YMCA, which sits on almost 16 acres, according to Lesher.

The site is located on the west side of Glenrose Road, north of 57th Avenue, and directly north of another 15-acre parcel of vacant land bordering the Ben Burr Trail.

Lesher says the organization plans to honor the history of the land, while minimally impacting the environment with plans for a series of nature trails for the community to use.

“Between our parcel and the Ben Burr Trail is an additional 15 acres. We’re working with the Bauer family right now to convert that into a conservation easement,” he says. “That means we’d be able to keep that in a natural state forever.”

“We went ahead and purchased the Gold’s Gym establishment in 2016, just to establish a presence there,” Lesher says. “That set the stage for us coming into that area.”

Since then, community members have expressed interest to access more of YMCA’s traditional programs and services in their neighborhood.

Now that the multiyear search for property is complete, the organization plans to construct a facility with a full set of traditional features including a gymnasium, a pool, community gathering areas, a teen programming space, early learning childcare, and a health and wellness center, which were not available at the former Gold’s Gym building.