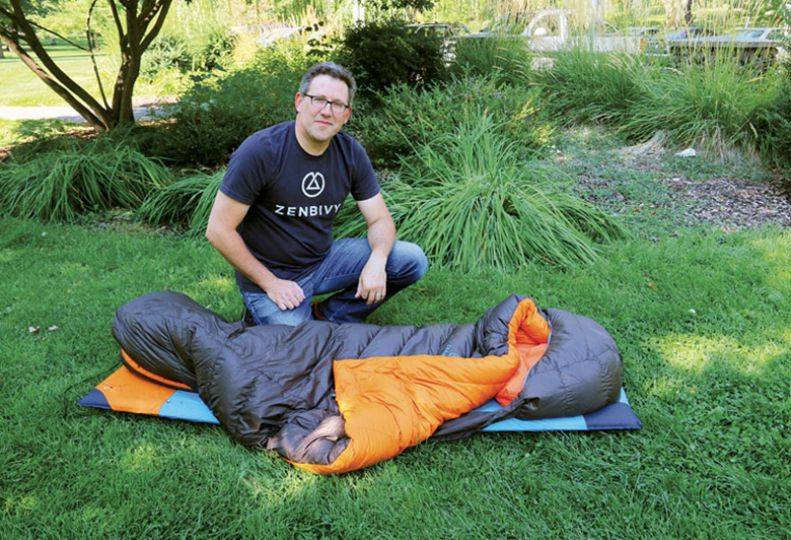 Michael Glavin says he’s seeking to turn both the sleeping bag industry and the retail world on their heads with his camping gear company, Spokane-based Zenbivy LLC.

The company’s primary product is a combined sleeping bag and camping bed that Glavin contends is a game-changer for campers. Zenbivy’s premise is that the camping experience should be comfortable without requiring people to carry heavy camping equipment, Glavin says.

“The Zenbivy bed is the first product that is legitimately as warm and light as a mummy bag,” Glavin asserts. “There are other attempts to create a hybrid sleeping bag with a mattress … but this is the first one that legitimately competes with the warmth and weight of a mummy bag.”

A mummy bag is a sleeping bag that has a snug, tube-like shape to enclose a camper’s entire body, leaving only the face exposed.

The Zenbivy bed consists of a light inflatable mattress, a detachable sheet with a hood, a detachable down quilt, and a pillow. It can snap together to create a traditional mummy bag or be left mostly loose, depending on a user’s sleeping position preferences and the outside temperature. The bed is rated for temperatures as low as 23 degrees Fahrenheit.

Zenbivy is based out of Glavin’s home office at 815 E. Syringa Road, on Spokane’s South Hill. Glavin, who has more than a decade of experience marketing products such as sleeping bags and thermoses for outdoor gear companies such as Spokane Valley-based GSI Outdoors and Seattle-based Sierra Designs Inc., began the company less than two years ago, beginning with a Kickstarter crowdfunding campaign in June 2016. Glavin invested $37,000 of his own money to start the business, and after the Kickstarter generated $120,000, Zenbivy was officially born in January 2017. Since then, Glavin says the company has sold about 1,200 Zenbivy beds. He estimates the company made about $50,000 in profit in its first 12 months.

Glavin says his passion for climbing inspired him to create a sleeping bag that is both comfortable and lightweight.

“When you’re a climber, you have to carry your climbing gear in addition to all of your camping gear, so it really forces you to focus on keeping it minimal,” Glavin says. “You can see that in the design—our quilt goes completely flat so that you can have one bag that you can use for everything.”

Lack of comfort when camping prevents many people from exploring the backcountry, Glavin says, and he aims to remove that obstacle through Zenbivy products.

“If it’s easy and comfortable, you’ll do it more,” he says. “I was never one who wanted to suffer, so I would make sure that while I kept the camping (gear) minimal, it was going to be comfortable.”

Glavin says the business model of Zenbivy is part of what’s made it so successful. Crowdfunding is an integral part of the design process, he says, because he can receive user feedback before a single bed is sold.

The beds are manufactured in Tianjin, China, before they are shipped to Los Angeles, where two contracted workers handle distribution. Glavin says the company works with about 10 independent contractors, who are spread out across North America and Asia, but he’s the only full-time employee.

Glavin has four business partners, one of whom is a cash investor, while the other three run a creative agency based in Newberg, Ore.

“That was the smartest thing I did, because they’re creatively engaged in the execution of the brand,” Glavin says. “A lot of times, startups can’t afford that level of creative execution, so a great idea looks small time. I didn’t want to take our big-time idea and have it look small time because that’s what I could afford, so I got people that I couldn’t afford by bringing them in as equity partners. When you look at our execution, we don’t look like a startup brand.”

Glavin says retaining majority equity has been vital to him from the beginning, which means growing the company slowly and carefully. While Glavin claims Zenbivy has been “profitable from Day One,” he says he opted not to pay himself until recently in order to keep majority equity.

“For me to double my size, I’d have to go out and double my inventory, get cash somehow from somebody,” he says. “Anybody who’s going to put up that kind of money is going to want equity. Pretty soon it’s 51 percent that you don’t have and you’re working for ‘the man’ again, and that defeats the whole purpose. The whole purpose of this is to avoid working for ‘the man’ into retirement.”

Glavin says he views Zenbivy’s reliance on the internet to connect employees and to conduct crowdfunding as the future of entrepreneurship.

“I feel like we’re taking advantage of something that a lot of people don’t realize exists right now,” Glavin says. “The only thing that’s slowing us down at this point is our willingness to invest in inventory and our ability to generate new products. I have to cut back my advertising from time to time so I don’t sell too many.”

Glavin says that while the company works well in its current structure, he hopes to someday bring operations for filling the down quilts to the Inland Northwest.

“That would be the long-term dream, is filling here … but I need to get bigger before that,” he says. “I’m shipping about five bags a day.”

Glavin says Zenbivy is preparing to launch a one-pound, 13-ounce ultralight version of the bed on crowdfunding website Indiegogo on Sept. 13. The company currently offers its combined sleeping bag and bed, as well as its separate pillow, online at zenbivy.com.