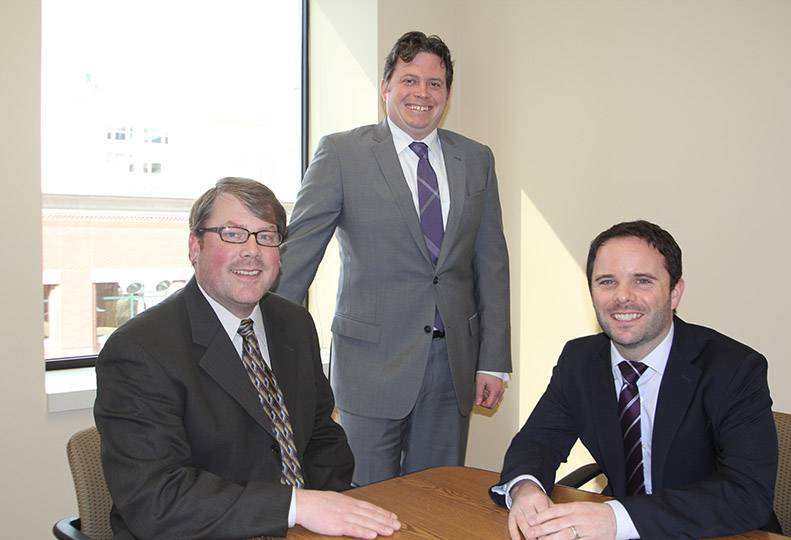 -—Staff photo by Treva Lind
Left to right, Nicholas Kovarik, Jason Piskel, and Ryan Yahne formed the firm last year after having worked together at another Spokane-area legal practice.

While Piskel Yahne Kovarik PLLC, of Spokane, began as a law practice just under a year ago, its three principals joined forces after gaining eight years of experience at established legal firms here.

The attorneys, who are all in their mid-30s, say they decided to join together to form their own practice this past fall mainly because they saw a need in Spokane for a smaller practice specializing in a niche area of construction, real estate, business, and employment litigation.

Jason Piskel and Nicholas Kovarik first met as students at Gonzaga University School of Law, where they both graduated in 2004. After both were hired as attorneys at Spokane's Dunn & Black PS law firm, they also worked there with Ryan Yahne, who grew up in Spokane and had returned here after graduating in 2003 from Pepperdine University School of Law, in Malibu, Calif.

Although Yahne went on to work at another firm here after about three years, the attorneys say they found in those early years that they worked well together as they gained similar legal experience.

"We knew we wanted to come together because we're on the same page and respected each other's work," Yahne says. "We knew we worked well together. We all came to the same point of wanting to own our own firm, and we saw a need for a firm of our size and abilities in Spokane."

The firm occupies a 2,000-square-foot office on the fourth floor of the Fidelity Building, at 522 W. Riverside, in downtown Spokane.

Already, the firm can claim it successfully argued a court case before the state Supreme Court. In December, the Supreme Court ruled in favor of Spokane-based consulting company Vizant Technologies LLC, formerly known as PE Systems LLC, which Kovarik represented as the plaintiff in a lawsuit that as a core issue challenged Vizant's standard contractual agreement with clients.

Overall, Kovarik says the three principals in the firm share the same philosophical approach to law.

"We have the know-how and expertise to aggressively litigate a case, but focus on trying to creatively solve the problem," Kovarik says.

By creatively, he says that means, "Sometimes solving the problem without litigation or before litigation. Some people might say right away, 'Let's file a claim.' It's not always in your best interest to file a lawsuit. Sometimes it is better not to."

Adds Piskel, "We felt a firm of our size could work efficiently to solve businesses' problems, for any dispute or issue they have. Our personalities meld well with business owners, employers, risk takers."

In addition to the three principals, the firm has grown to have five employees. They include one part-time attorney as well as a part-time law clerk who is scheduled to become an associate lawyer at the firm after passing the bar later this year, Kovarik says. The office's other employees include an office manager, a paralegal, and a file clerk-runner.

The firm's clients include contractors, small businesses, a few larger employers, and individuals, the attorneys say. In addition to construction industry clients, other clients are in manufacturing and consulting businesses.

"We have a good mix of small businesses and some larger employers, and clients all over the region in Spokane, North Idaho, Tri Cities, and Seattle," Yahne says.

In addition to court litigation matters, Piskel says the firm also assists businesses with documents such as lease arrangements and project contracts. Employment-related legal issues can include confidentiality and noncompete agreements, in addition to disputes over wages and other employee-employer disputes, the attorneys say.

Piskel's practice areas include construction law, real estate law, public procurement, eminent domain, bid disputes and protests, lien and bond claims, private commercial disputes, and other claims such as delay of work. He also has civil trial work experience, and he frequently advises on issues that include public works projects and the interpretation of government contracts.

Kovarik's practice includes emphasis in commercial, civil, property, and employment law, and government liability litigation. He has advised and represented contractors, subcontractors, owners, and sureties in construction-related disputes. Kovarik also frequently is a speaker at employment law and construction seminars.

Similarly, Yahne focuses on construction, real estate, and business litigation, while representing owners, contractors, subcontractors, suppliers, and design professionals. He also includes an emphasis in sustainable or green building law, and he holds a Leadership in Energy and Environmental Design (LEED) professional designation. Yahne says the credential isn't required as an attorney representing such matters, but it helps him understand the issues and requirements to gain LEED certification.

The LEED rating is a nationally recognized benchmark for design, construction, and operation of sustainable buildings. The LEED green building certification system is overseen by the U.S. Green Building Council, which also offers a professional credential program for people who want to stay current on the latest changes and additions to the LEED process.

"If someone is constructing a LEED-rated building, there are certain requirements and milestones that must be reached in working with the LEED program," Yahne says. "The biggest issues I see are with owner contracts and how you deal with LEED requirements in that contract."

Legal questions sometimes arise regarding certain standards, such as a requirement that building supplies be obtained within a certain number of miles from a project site, the attorneys say.

As the construction industry recovers from recessionary years, Piskel says some of the firm's clients are seeing potential for growth and likely will need help with legal matters such as environmental issues for building projects. He says the building of green and LEED-certified projects also is expected to pick up.

"One of the biggest challenges is the economy," Piskel says. However, he adds that as the federal government wrestles with current budget issues, "Our federal contractors are waiting to see what will pop. People are seeming more upbeat about projects a year from now."

Piskel, Yahne, and Kovarik have been named "rising stars" in Washington state by Super Lawyers Magazine. This recognition goes to lawyers who are nominated by peers as the best attorneys who either are 40 years old or under or who have been practicing for 10 years or less.