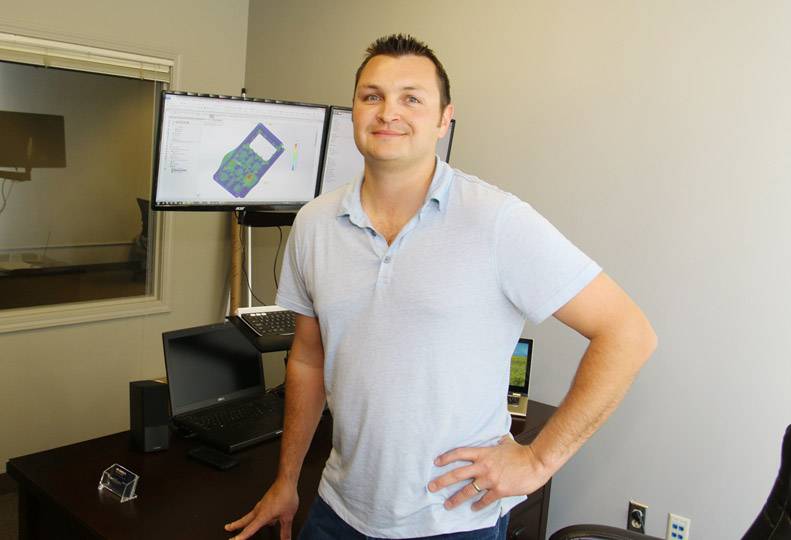 -—Mike Mclean
Andy Johnston says he enjoys the challenges of understanding the physics of an engineering problem and coming up with the best solution.

Johnston offers mechanical engineering design and analysis, specializing in technical aspects of finite element analysis and computational fluid dynamics, he says, adding, “I get to use my systems analysis experience.”

Finite element analysis involves dividing objects into a large number of parts to determine how the parts interact with each other and how they react to certain variable conditions, such as heat, pressure, and vibration, Johnston says.

“Computational fluid dynamics is similar to FEA, but it deals with voids that get filled by fluids,” he says.

Johnston designs parts and assemblies, from concept to manufacturing stages.

“People come to me with a great idea for a product,” he says. “I can help them design it and help them source the hardware.”

As of earlier this month, Johnston says he was busy with three active projects and he was working on a proposal for a government project involving high-energy lasers.

“I usually find a way to fit projects in,” he says, adding that his backlog has never been longer than a few weeks.

Johnston declines to identify his clients, citing nondisclosure agreements with most of them.

Speaking more generically, he says projects range from work on a device to attach to a wakeboard to a project aimed at desensitizing people to certain allergens.

Johnston says he worked for nearly half of 2016 providing engineering and systems-design services on a project for a company that makes atmospheric water generators, which extract drinking water from the air. The company’s generators range from a water-cooler sized device that generates three gallons of water a day to a large machine that’s mounted on a three-axle truck and produces up to 3,000 gallons a day.

“You’re not going to get something like that right the first time unless you get the appropriate analysis,” he says.

Johnston Engineering is based in a small office space on the second floor of the 1889 Building, at 120 N. Stevens. Johnston has no other partners or employees.

Before opening his own office in late 2015, Johnston, a Gonzaga University graduate who has a bachelor’s degree in mechanical engineering, had worked in Liberty Lake at Isothermal Systems Research Inc. and its successor, SprayCool Data Systems Inc.

Cleveland-based Parker Aerospace acquired SprayCool in 2010, and Johnston continued to work there in the specialized field of thermal management of electronics used in aerospace and military applications.

“Not many mechanical engineers are into heat transfer and thermo dynamics,” he claims.

Parker Aerospace closed its Liberty Lake operations in 2015. Although the company offered Johnston a position in Ohio, he says he’s committed to staying in the Spokane area.

“I grew up here,” Johnston says. “My wife’s family is here. We designed and built our house here.”

“I went straight from my exit interview to collect on my first invoice,” he says.

Johnston says he billed about 1,700 hours last year, and he’s on pace to bill a similar amount of hours this year.

He says that’s a respectable number of billable hours for a one-person operation.

Johnston adds, however, “I would like to get enough work to justify hiring a mechanical drafter. Right now I’m doing it, and when I’m doing it, I’m not out getting more work.”

He says potential clients find out about the Andy Johnston engineering practice through networking and word of mouth.

“The challenge is finding people who need my skills and finding them at the right time,” Johnston says. “Last year, things fell into place.”

Contrary to the stereotype of engineers being socially awkward, Johnston says he enjoys getting out and talking to people.

“I’ve always been OK in a crowd,” he says. “But I really like to get into the technical details and understand the physics of a problem and come up with the best solution.”

Johnston says he’s plugged into economic development and chamber of commerce group Greater Spokane Incorporated and its entrepreneurship program Startup Spokane, and he tries to advocate for Spokane.

“It seems like ever since the dot-com bust, companies have been leaving Spokane,” he says. “I want to do my part to help build technology and engineering in our area.”