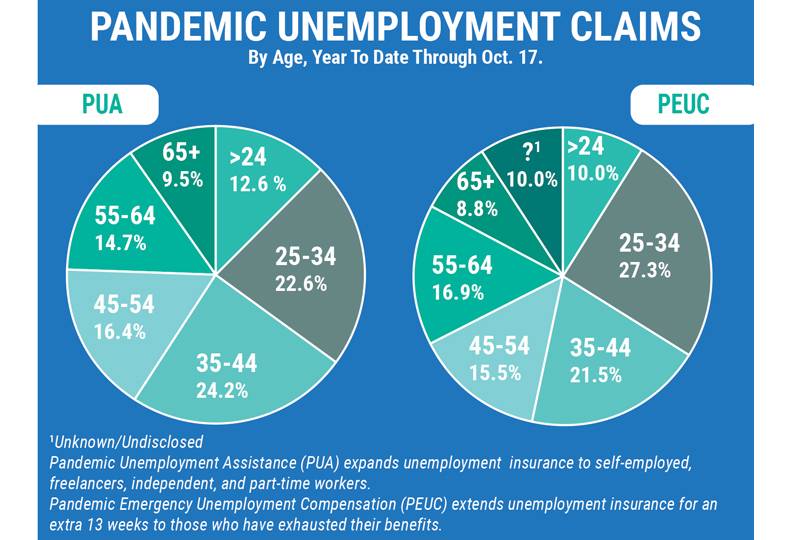 With seven months of employment data in the books since the spread of COVID-19 to the U.S., a somewhat clearer picture of the region’s jobs scene has emerged.

Based on the three types of unemployment insurance benefits currently available to Washington state workers, those between the ages of 25 to 34 in Spokane County have been the most impacted by the pandemic. Spokane-area economists say that’s due to the fact that age bracket constitutes the largest percentage of those sectors who have been affected the most by the pandemic’s presence.

And they still say there’s a long way to go when it comes to being able to determine Spokane County’s workforce outlook for both the short and long term.

“With this pandemic, we just didn’t know what to expect,” says Doug Tweedy, a regional economist with the Spokane office of the Washington state Employment Security Department. “We’re at least starting to get a clearer picture.”

Spokane County had an average of 225,792 workers employed each quarter of 2019. The largest segment constituted those in the 25-34 age range, which made up an average of 51,300, or 23%, workers per quarter, according to ESD statistics.

Regular continued claims are in the category of traditional unemployment insurance, which allows a person to collect benefits up to 26 weeks.

Unemployment benefits are calculated based on wages from an individual’s base year, which is the first four of the last five calendar quarters, according to Mike McBride, a business and industry analyst for the Spokane Workforce Council.

But totaling two other unemployment benefit classifications specifically earmarked for pandemic-related assistance, again, the 25 to 34 age group leads the way in the highest number of claims filed, according to ESD statistics.

One of those classifications is Pandemic Unemployment Assistance, an emergency program established by the Coronavirus Aid, Relief, and Economic Security Act for “gig workers,” McBride says.

“Clearly it’s a function of closures or reductions in staff by the bars, food services, hotels, and motels,” Tweedy says. “And the unfortunate thing is that those industries are slow in coming back.”

What economists and employers have seen, however, are young workers making wholesale changes into other industries, he says.

“They’ve moved into transportation, warehousing, and information technology,” he says. “We still don’t have a lot of data to go on, but anecdotally, we’re hearing a lot about that age group moving into computer communications. That’s a transition that’s in their sweet spot.”

“It can be a potential permanent decline in their overall lifetime income at the point of involuntary separation,” he says. “It can take a long time to recover from lost wages.”

Overall, Tweedy says about 60% of all workers laid off during the initial surge of the pandemic in Spokane County have returned to work.

“Those regular (unemployment) claims have continually decreased since mid-May,” Tweedy says. “But it’s the pandemic programs where we’re only seeing small decreases.”

With about 24% of Spokane County’s total workforce 55 and over, Tweedy says many who were near or at retirement age chose to retire as they are among the groups at the highest risk of contracting the virus.

Moving forward, Avista’s Forsyth predicts the pandemic will leave some permanent changes on the American workplace in a variety of sectors.

“We’ve discovered that employees can work effectively at home,” he says. “Even inside a production plant, there are certain jobs where you don’t have to be on site. I think working from home is going to be a permanent impression moving forward.”

Forsyth says labor laws regarding at-home workplaces might have to evolve sooner than later.

“What happens if you get hurt while working from home?” he asks.

And, says Forsyth, there might be future tax implications for both employers and employees when workers are set up at home.

“I have a hard time seeing us flip a switch and going back to the way things were before the pandemic,” he says.