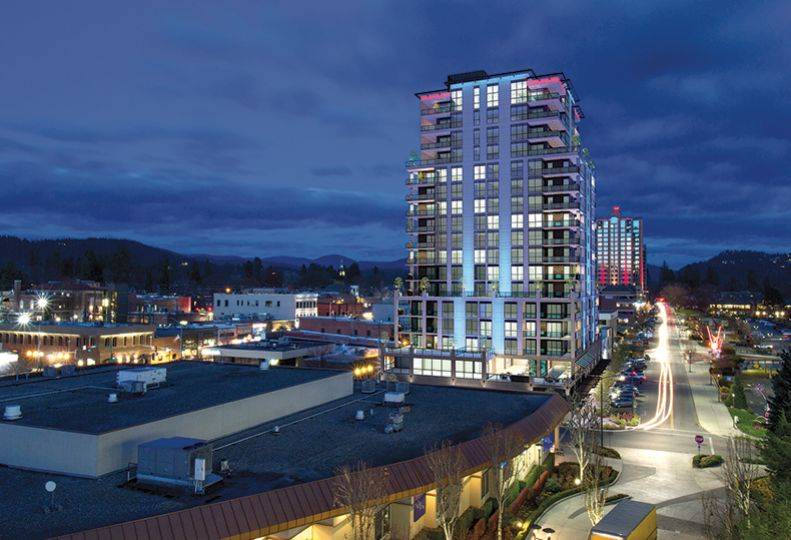 -—Miller Stauffer Architects PA
The Thomas George condominium development in downtown Coeur d’Alene will have units that range in price from $800,000 to $4 million, one Realtor says.

The Thomas George development site is an 18,900-square-foot lot where a U.S. Bank drive-thru ATM was previously located, at 116 S. Third.

Anderl declines to disclose the construction value for the development. Permit application data on file with the city of Coeur d’Alene, however, shows an estimated valuation of $45 million.

Over one-third, or 21, of the total condos have been reserved in the last two months since they’ve been open for reservations, which Anderl contends is an indication of strong interest in and support of the project.

Prices will be dependent on the views and size of the unit, Anderl adds.

Monte Miller, founding principal of Coeur d’Alene-based Miller Stauffer Architects PA and project architect, says demolition of the ATM drive-thru and parking lot has been completed, the property is fenced in, and crews are currently preparing the site for construction to begin.

Miller says, “We’re hoping to begin the shoring and excavation in a couple of weeks, with construction starting probably mid-August.”

Miller and Anderl say the project will take up to two years to complete.

Spokane-based Garco Construction Inc. is the general contractor, and the Spokane office of DCI Engineers is providing engineering services.

The development is owned by Front Row Properties LLC, of Coeur d’Alene, which has developed other residential properties in North Idaho including a condo complex in Post Falls and an apartment community in Coeur d’Alene, Anderl says.

On the main level, the Thomas George building will have two 1,500-square-foot commercial spaces facing Front Avenue, that Anderl says would be ideal for food service businesses to occupy.

“We’re looking for food service. We’re thinking of coffee on one end and a restaurant on the west end,” Anderl says.

Miller says the property will have onsite parking, the majority of which will be underground. The building’s entrance will be accessible from Third Street.

A porte-cochere, which is a covered entrance large enough for vehicles to pass through, will lead residents to the building’s parking garages.

“We’ve got five levels of parking. Two are below grade, one is at grade, and two are above grade,” Miller says. “The main floor lobby will have a covered drive-thru area to drop people off or pick people up.”

The third floor of the high-rise will have dedicated community spaces including a clubhouse, a residential terrace overlooking the boat launch, an indoor and outdoor pool, a 24-hour fitness center, a golf simulator room, and restrooms and showers.

Site plans show The Thomas George will have a mix of units from 800-square-foot, one-bedroom, one-bathroom condos to 2,300-square-foot, three-bedroom, two-bath units on the fourth to sixth floors of the high-rise.

The interior of the condos will have high ceilings, high-end cabinetry, appliances, and finishes that Anderl says will be specified at a later date to ensure product and material availability for the spring 2024 opening.