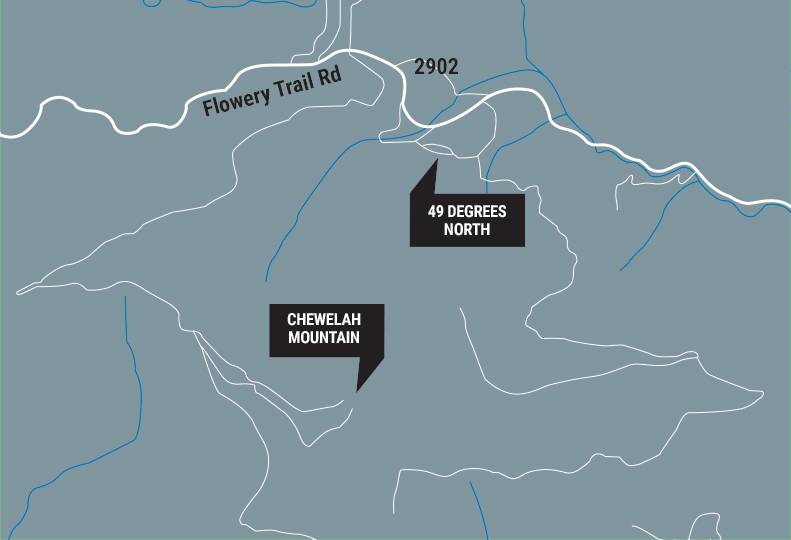 Chewelah, Wash.-based 49 Degrees North Ski Area has sold a portion of its planned $500 million Sunrise Basin Resort Community to Angel Peak Holdings LLC, a Coeur d’Alene developer, and will turn its attention to the development of a new 30,000-square-foot lodge and a lift, says John Eminger, the resort’s president and owner.

Eminger anticipates it will be at least two to three years before the company breaks ground on the new project, but says he expects construction will be complete within 18 months once work is underway.

Because the project is still in the planning phase, no construction cost is confirmed, but Eminger estimates the project cost will exceed $10 million. Eminger says the company is searching for a new bank partner to help finance the project.

Currently, the resort is working with the Forest Service to narrow down the location, and then utilities will need to be installed, he says.

The company also will need to determine the most efficient way to construct the building, he says, which could include building three, 10,000-square-foot modular structures that will be attached to one another or a single 30,000-square-foot building.

“It’s such a giant undertaking to put in a new primary lift and another great lodge to really propel the ski area into the next generation,” says Eminger.

Eminger also addressed the recent rumors about the potential sale of 49 Degrees North to the Cusick, Wash.-based Kalispel Tribe of Indians, saying, “I’m a small business man and of course my business is for sale. I have a magic number in my head, and yeah, if somebody wants to buy the ski area that’s great … but no, (the Tribe) hasn’t bought the ski area.”

Eminger says he believes the rumor was fueled by the Kalispel Tribe’s recent corporate sponsorship of the ski area’s spring break Ski Free Week, which gives free passes up the mountain for the week of April 1 to April 7.

While Eminger says a sale of the resort isn’t pending, 49 Degrees North did sell roughly 70 acres of the 320-acre Sunrise Basin development for $1.8 million to Angel Peak in May of 2018, according to records filed with the Stevens County Assessor’s Office.

The Journal previously reported that the resort planned to develop up to 2,200 residential units, 800 hotel rooms, and up to 360,000 square feet of commercial space in Sunrise Basin near the base of its Sunrise quad chairlift.

Angel Peak has almost finished construction on an eight-plex condominium building, says Pat Kostecka, the property listing agent with Citibroker LLC, of Spokane, and has installed the foundation for the planned five-plex, on which construction is expected to begin this spring, he says.

Angel Peak plans to construct another five-plex and eight-plex this summer as well.

Kostecka says the company is waiting on a certificate of occupancy on the first condo building before it moves forward with construction of more units, so it can gauge the demand on the units to help it determine how many will be built.

Currently, Angel Peak is using a general managing contractor to finish the work started by Vandervert Construction Inc., of Spokane, the original contractor that went bankrupt in 2018. Kostecka says he isn’t sure if a contractor for the new buildings has been selected yet but says Angel Peak already has all the plans drawn up, and with the exception of a few tweaks, future buildings will likely be similar architecturally.

Kostecka says Angel Peak has already completed all the necessary utility and infrastructure installations for future development and completed the pavement of the main road to the site.

Kostecka co-lists the properties with Citibroker real estate agent Brad Moeller, and says he expects to begin marketing the condominiums this spring.

As for 49 Degrees North’s plans, Eminger says a new high-speed lift also will be constructed alongside the new lodge that should take roughly five months to construct.

During the upcoming summer, the company plans to renovate the existing lodge and expand its snowmaking operations farther up the mountain, he says. The resort also plans continuing modernizations and upgrades to the current lifts, he says.

Other developments include a new project being developed by the U.S. National Forest Service with help from 49 Degrees North Ski Area on 300,000 acres in the Colville National Forest dubbed Chewelah A to Z Stewardship, says Eminger, which he describes as a “forest health program with recreation built into it.”

The project looks to capitalize on the success of the Mill Creek A to Z project, which worked with community partners to restore 50,000 acres in a watershed in the Colville National Forest.

“There’s the timber harvest, which brings fire fuel reduction and forest health, but when they leave, if they were to plan some recreation … and plan it along with the timber sale, for very little capital expense they can have an asset that works for the community for the next 30 years,” Eminger says.