Alexa, show me the money 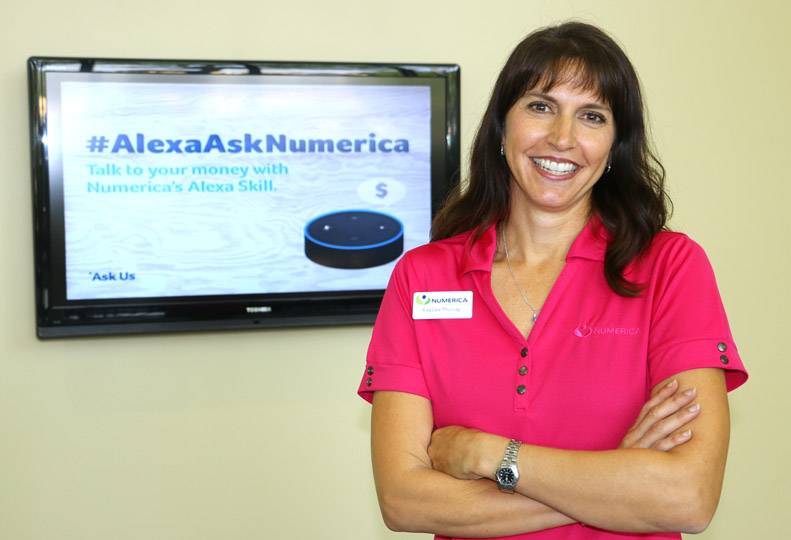 Amazon’s Alexa, a popular virtual assistant that you may already have sitting on a nearby desk or shelf, is soon to be the newest employee, figuratively speaking, at Spokane-area financial institutions.

At least two area credit unions—Numerica Credit Union and Boeing Employee Credit Union—see the appeal artificial intelligence has for Spokane-area customers and have begun working to incorporate them into their member service offerings.

Numerica has already added Alexa voice transaction capabilities, and BECU says it plans to make the service available to its members later this summer.

Representatives from both financial institutions describe the new offerings as skills, or applications that have been designed to integrate into existing proprietary banking systems, in order to interact with member accounts and information.

Amazon Alexa is a virtual assistant developed by Amazon.com Inc. through which users can play music, create to-do lists, set alarms, get news, and perform other tasks through voice commands.

Numerica customers who use Alexa devices now can speak a question aloud, such as asking about their account balance, and the virtual assistant will answer them immediately.

“BIG developed the platform that supports Alexa, and worked with Symitar to gain client interest,” says Murray. “Symitar provides the banking software we use for our core systems, and for us it was important that this technology be able to tie into our existing systems, for ease of use and consistency.”

She says normally Alexa skills are pre-set and designed to work one way for all users, but BIG worked closely with service providers like Symitar in order to match voice skills with the specific needs of credit unions and their customers.

“Numerica was one of two credit unions to beta test the software, through a nine-month process. We took our time figuring out how this feature would work,” she says.

“We wanted to start with one of the most popular, basic things customers ask for each day, like checking their account balance. Once that was established we knew we could eventually add more functions to it.”

To use the voice transaction service, Murray says, members need to have an Amazon Echo speaker, and the Amazon Alexa application on their phone. They can then add the Numerica “skill” to their Alexa application, and set the account with the login and pin code they use for online banking services, to link it to their Numerica accounts.

“In order to use the service members also must be signed up for online or mobile banking in order to set up their account with Alexa,” she says.

Once signed in, Numerica members can use voice commands to transfer funds between accounts, make loan payments, and access balances and account histories for checking, savings, and loans.

Elizabeth Giles, spokeswoman for Numerica, says the credit union currently has 135,000 members and over $2 billion in assets.

She says more than 70 percent of all transactions with Numerica are generally done via online or mobile banking, with only about 30 percent being transactions members prefer to conduct via phone, ATM, or visiting a branch.

Of the 110,000 members registered for online or mobile banking at Numerica, Murray says only about 100 are currently using the Alexa skill.

“The service is still new and so we expect member interest will continue to grow over time,” she says. “We look at it as similar to when we first started offering mobile deposits, in that it takes time for people to adjust to new technology.”

Giles says that since Numerica introduced mobile check deposit in late 2012, the credit union has continued to see increases in the number of deposits received monthly.

“Mobile check deposit took in more checks last month than each of our branches individually,” she says. “The number of mobile transactions each month is more than double that of online banking.”

“Continual increased usage of online and mobile banking options shows us our members still crave these at-home options,” says Murray. “We also know that not every member is going to be interested in this skill, and that’s okay too.”

She says that there are several reasons members may choose not to use the new Alexa voice services, such as not yet having an Alexa device or app, set-up time involved, and security concerns.

“Banking remains a highly regulated industry, so it can be a challenge to anticipate member needs and meet them in creative ways, while also managing security and usage concerns,” she says.

Tom Tyson, BECU’s Seattle-based senior manager of digital strategy, says the credit union, which has over 1 million members, 9,800 of whom reside in the Spokane area, plans to offer its own Amazon Alexa skill later this summer.

“The Alexa skill will be available to any member who uses our digital services,” he says. “Currently about 63 percent of our members actively use online banking, and 40 percent actively use mobile banking.”

Tyson says BECU has been looking at adding Alexa voice transaction software for about a year now, surveying its membership to gauge interest.

“About 70 percent of our survey group said they had an Alexa device, and of those 76 percent indicated they would be interested in using it to check their account balance,” he says. “Some 60 percent were also interested in using Alexa to transfer money between accounts.”

Tyson says survey respondents were less interested in using Alexa for more extensive processes, such as opening a new account or starting a loan.

“Given those responses, we felt it was best to focus first on basic transactions,” he says. “However, we do see the potential in the future to add to the Alexa skill, based on membership needs.”

“This is an interesting medium that reduces friction for people who might normally be intimidated trying to manipulate a computer,” Tyson adds. “It’s an exciting new way for members to interact with their finances.”

Meanwhile, although other area financial institutions may appear to be slower to adapt voice transaction software, that doesn’t mean they’re not looking into it.

“We don’t typically rush to be the first with new technology, but we do try to ensure that what we do launch is top quality,” he says. “All of the things that are available at larger banks, we can do here.”

According to Hansen, STCU currently has nearly 180,000 members, and manages around $2.7 billion in total assets.

“Our social media team has done a lot in the last three years to provide exceptional member service, beyond simple basic questions, requests for call-ins, and we really embrace it now,” Hansen says. “That said, old school service remains very popular. Our branches are busy, and our contact center handles more calls every year.”

While Numerica hasn’t received much feedback on its Alexa voice transaction services yet, Murray says members who seem most excited about the new service are those who were already using Amazon Alexa daily.

“We’ve gotten some comments on social media about how cool it is that we’re able to offer this, and how easy it makes banking at home,” she says. “For some people, banking is a necessary task they dread having to spend extra time on, and this is just one more tool that makes it easier to integrate those tasks into their routine.”

Murray says Numerica soon hopes to expand the service to include Google Home, the smart speakers developed by Google for use with its personal assistant, called Google Assistant.

Murray says the credit union also is working to develop an online and mobile platform for its business clients.

“For the last year and a half, we’ve been working on the business platform and hope to roll that out next month,” she says.