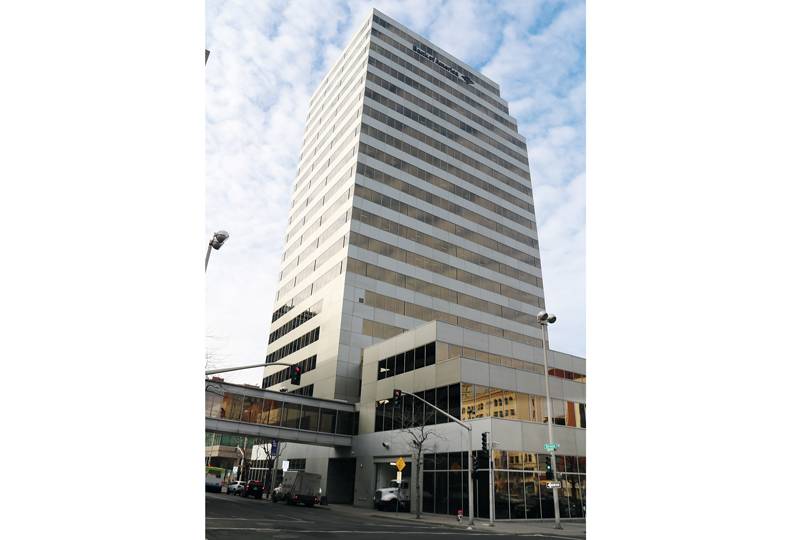 -LeAnn Bjerken
The Bank of America Financial Center currently is at 87 percent occupancy.

The acquisition gives Redstone a significant footprint in Spokane, which it hopes will serve as a base for future investments in the surrounding area, Velji asserts.

“This is our first investment in the Spokane area,” he says. “We wanted to set up a good base here, as our thoughts are to continue to grow in Spokane. We enjoy the commercial office space market and hope to pursue new opportunities within that market as they come along.”

Velji says the sale, which was completed Dec. 14, included the 20-story building at 601 W. Riverside, and an eight-floor parking garage connected to it by a skywalk to the south.

He says the main building has about 355,000 square feet of office space, about 87 percent of which is currently being leased.

Redstone has retained longtime leasing agents for the building, Craig Soehren and Erik Nelson, both of Spokane-based Kiemle Hagood.

Some of the building’s larger tenants include Bank of America Corp., Moss Adams LLP, and Clearwater Paper Corp.

Velji says Redstone’s purchase of the building will make a significant addition to the company’s recent acquisitions in the Colorado and California markets, which include Tamarac Plaza, in Denver, and office buildings in Los Angeles.

“We loved this building from the start and thought it would be great if we could use it as an opportunity to enter this market,” he says.

Andy Miller, Rob Anderson, and Jason Rosauer, all of Kidder Mathews, were the listing brokers.

Unico initially purchased the Bank of America Financial Center from First States Investors 5000A LLC for $36 million in 2007. Spokane County assessed the property’s value at $38.8 million this year.

The Bank of America Financial Center sale occurred rather quietly compared to several other recent transactions by Unico Properties, among them a 1.8 million square foot, 27-building portfolio deal involving properties in Seattle and Denver for $710 million.

That deal, which was completed Jan. 17 and included the sale of Seattle’s historic Smith Tower, was wholly unrelated to the Spokane transaction.

Unico continues to own and manage 560,000 square feet of office properties in Spokane, including the 11-acre Rock Pointe Corporate Center, at 1330 N. Washington, on the periphery of downtown. The company currently owns and operates 17 million square feet of commercial properties nationally.