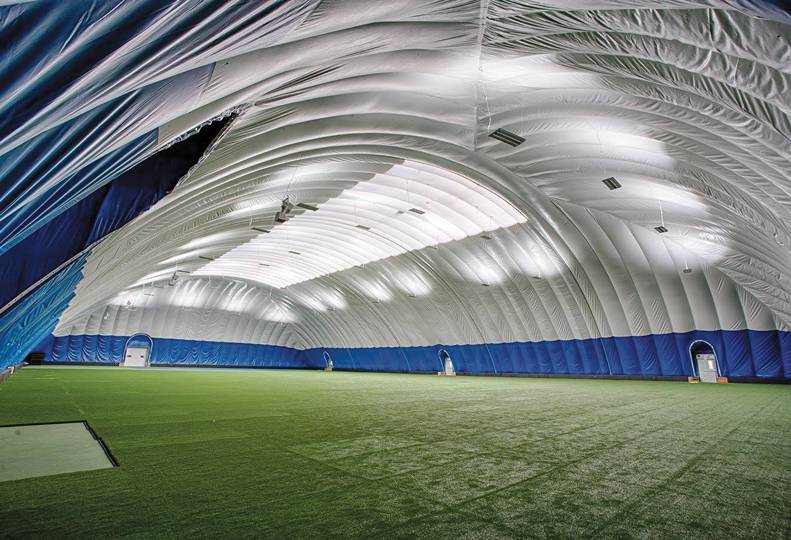 -AIRZON BUILDING SYSTEMS
The interior of the Airdome Northwest facility will look similar to this manufacturer’s rendering.

An airdome is a structure with a fabric covering supported—or inflated—by internal air pressure. Cantu and his two sons, Connor and Brandon, plan to own the property through a company that will do business as Airdome Northwest. The two younger Cantus will operate the facility.

Cantu, who is the founder of Cantu Commercial Properties LLC and has volunteered as a baseball coach for 22 years, says he had been approached often by other teams’ coaches about leasing warehouse space to practice in when the weather is bad. “They were frustrated because they didn’t have any place indoors,” he contends.

The project is still in its early stages, and Cantu declines to disclose a project cost estimate. The airdome has been ordered, however, and he says he expects it will arrive this summer.

Illinois-based Airzon Building Systems is manufacturing the inflatable dome, which will be shipped to Spokane and erected at the site.

Cantu says he plans to apply for site work permits within the next few weeks, and his goal is to open it in September, when school sports ramp up.

The airdome will be located on about 1.3 acres of vacant land Cantu Commercial Properties LLC purchased in late 2020 for $320,000 at 3800 E. Joseph, according to Spokane County Assessor’s records.

The space, which will have artificial turf, will include up to six bays separated with nets used as retractable curtains to allow teams to rent one or more bays at a time, says Cantu. Five bays will have regular field space, while the sixth will include four batting cages and two areas for pitchers to throw.

The facility will have a total playable area of 35,000 square feet.

Cantu says a second floor will be built within the dome with a conference room with enough space for team meetings.

At times, the facility will be available to rent for non-sports-related events, says Cantu.

“We’re not excluding anything or anybody,” he says.