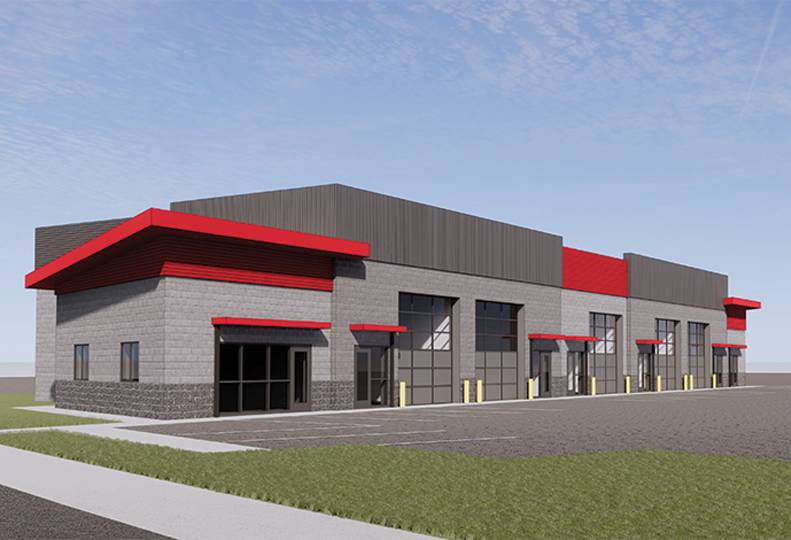 -MMEC Architecture
The Fat Cat of Spokane complex in west Spokane will consist of a total of 35 condo garages, including six commercial spaces. Work is expected to start on the project in April.

Tricia Jarrett Developments LLC, of Pasco, has submitted permits to the city of Spokane for Fat Cat of Spokane to be constructed at 9014 W. Hilton, behind the Bruchi’s restaurant and the Mister Car Wash along Technology Boulevard. The project is estimated to cost $4.9 million to build, according to permitting application documents.

Tim Bush is co-owner of Tricia Jarrett Developments. The company is named for his daughter, another co-owner, he says. Bush and his sons, TJ and Blake, run Tri Cities-based Fat Cat Garage Condos through another company, TTB Investments LLC.

Bush says condo garages often are used for storage and maintenance of vehicles such as motorhomes, boats, and classic cars. Fat Cat of Spokane will offer a total of 35 condo garages for lease or sale, including six commercial spaces.

Condo garage lease rates will start at $1,250 per month, while purchasing a condo garage is likely to cost about $200,000, Bush says.

“We are only going to sell about 65%, and keep the rest for rentals,” Bush says.

In addition to 29 condo garages and a small office space for Tricia Jarrett Development, Fat Cat of Spokane will offer six spaces for commercial use. Bush says the spaces will be useful for a variety of commercial applications, including manufacturing, office space, and restaurant uses. He says he’s currently in talks with three prospective commercial tenants.

Work is expected to begin on Fat Cat of Spokane in April, starting with the commercial spaces, which will have lease rates starting at $2,500 per month, Bush says.

Baker Construction & Development Inc., of Spokane, is the contractor on the project. Brooke Baker, chief development officer, says four structures totaling about 54,000 square feet will be constructed at the northwest corner of Hilton Avenue and Technology Boulevard.