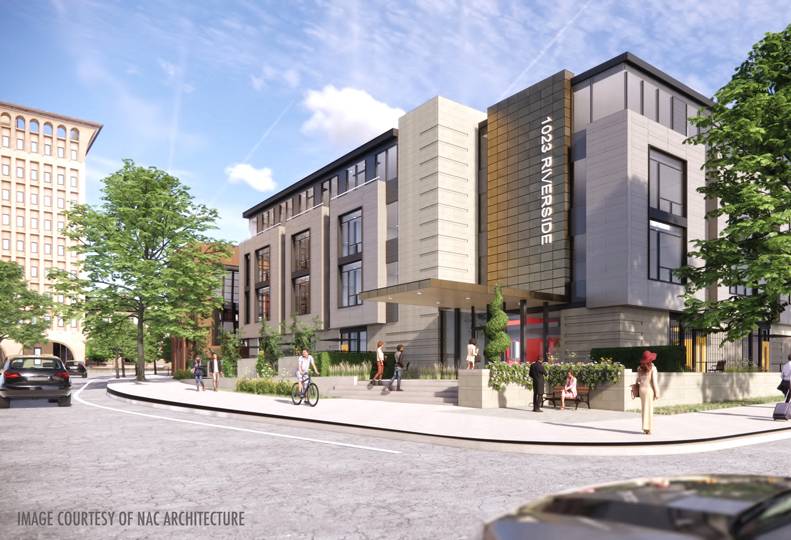 -NAC Architecture
The envisioned apartment building would include 39 living units and is described as "workforce-priced housing."

Doug Yost, vice president of Centennial Real Estate Investments, says the multifamily-zoned apartment complex  on the western edge of downtown Spokane will have what he describes as “workforce-priced housing,” with smaller, affordable units. The property is part of Centennial’s redevelopment plans for the entire block, which includes the former Spokesman-Review production facility, he says.

“We really looked at all the angles of the current building and came up with the best use,” Yost says. “Housing is really needed at this time.”

Yost says the project will have 39 total living units on four levels. One floor will have nine units, and the other three floors will have 10 units each.

Construction is expected to begin in late 2022 and take between 12 to 18 months to complete, Yost says.

An estimated cost to develop the apartment complex won’t be available for a few months, he says.

NAC Architecture is the project architect and designer. Walker Construction, in Spokane, is the contractor.

Betsy Cowles, chairman and CEO of Cowles Company, says in a press release, “This project is a continuation of our investment in repurposing sites to their highest and best use. We believe this new housing will help fulfill a community need during the city’s transformational growth phase.”

The 23,000-square-foot building was built in 1910 and had served as the headquarters for the Spokane Catholic Diocese for over 40 years. It had been converted into office space in recent years.

According to the release, the building was vacated in 2019 for safety and operational concerns.

Centennial Real Estate Investments is a division of Cowles Co., and also owns the M Apartments, at 612 W. Main, and the Chronicle Apartment building, at 926 W. Sprague, in downtown Spokane.

Cowles Co. also owns the Journal of Business, the Spokesman-Review daily newspaper, and the KHQ-TV station, among other holdings.