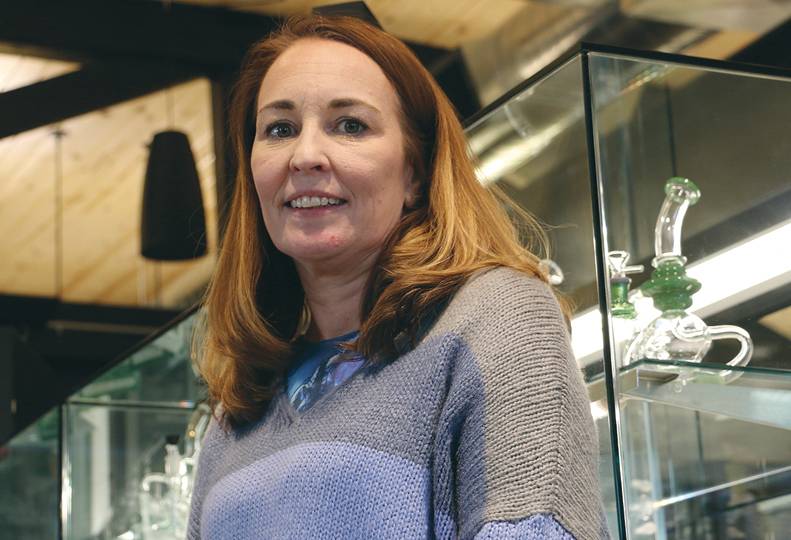 Apex Cannabis co-founder Stacey Peterson spent the majority of the past weekend editing, then ultimately presenting, the marijuana and cannabis company’s 75-page training manual to key personnel in the business.

“As we’ve grown, it’s become important for us to standardize our operations,” says the meticulously organized Peterson.

Along with her husband, Troy Peterson, the couple has experienced rapid growth in an industry they once knew next to nothing about.

Apex now has close to 50 employees who occupy a range of positions that include information technology, security, and budtending, she says.

The company’s growth is on par with the estimated statewide trend in play as it relates to the proliferating marijuana and cannabis industries.

In 2014, 250 licensed marijuana businesses employed at least 717 workers and paid $17.7 million in total wages to employees, according to the estimates from the Washington state Employment Security Department.

By the end of 2018, the total number of active marijuana-related businesses—including growers, processors, retailers, transportation, and warehouse workers—stood at least 1,085, a 334% increase from 2014, ESD estimates show. Those businesses employed an estimated 9,950 workers and paid $270.6 million in employee wages, according to ESD.

Quantifying that trend for the emerging industry, however, is more of a challenge for economists and industry advocates. Due to the fact the use and sale of marijuana is a violation of federal law, they say they lack the ability to compile specific financial information at a city and county level as can be done with other industries.

The North American Industry Classification System is used by the U.S., Canada, and Mexico to classify businesses by industry. Each occupation is assigned a six-digit NAICS code. Federal and state governments require NAICS codes to determine if a business is eligible for government purchase contracts or grants, according to the U.S. Census Bureau website.

“Due to the federal ban, our industry doesn’t have NAICS codes,” says Vicki Christophersen, executive director and lobbyist for the Washington Cannabusiness Association.

Both Christophersen and Doug Tweedy, the Spokane-based regional economist with the Washington state Employment Security Department, say the only way ESD has to monitor the financial impact of the marijuana industry on Washington’s economy is to cross reference Unified Business Identifier numbers issued to businesses and individuals with those registered with the Washington State Liquor and Cannabis Board.

A Washington state Liquor and Cannabis Board online map shows at least 29 marijuana retail shops in Spokane County, 26 of which are endorsed for medical sales.

Underscoring the challenge of tracking marijuana and cannabis shops, when the Petersons opened a store on North Division last year, they were informed by a liquor and cannabis control board official that theirs was the 35th retail shop in Spokane, she says.

As of earlier this week, employment website Indeed.com listed close to 30 job openings related to the marijuana industry in Spokane County.

Christophersen called the legalization of marijuana in the state an “incredible story.”

“It’s based on the fact that voters of the state approved exactly what they wanted,” she says. “It’s now a billion-dollar industry to Washington where there is innovative science and creativity being applied.”

Though there are thousands of success stories to be lauded around the state, she says, there’s no shortage of unsuccessful attempts for those who tried to make it in marijuana.

“We are seeing some failures, to be certain,” Christophersen says.

Christophersen says just like businesses in other sectors, it’s the initial startup costs that often force business owners to shut down.

“Quite frankly, there were some people that thought it would be easy to get into the business. And the truth is, it’s not,” she says.

The Petersons have an entrepreneurial background. The couple previously owned a heavy equipment business and sold it in 2011 in search of other pursuits.

“We just didn’t find the right opportunity,” she says.

Eventually, they were approached by a friend and professional colleague who is an experienced marijuana grower and he asked them to become investors.

“We decided against that, but then we started looking into the business and were able to eventually open two stores in eight days,” she says.

The Petersons opened an Apex in 2016 in Moses Lake. A week later, they open another at 21502 E. Gilbert in Otis Orchards. They opened their third store at 1325 N. Division last year.

“We wanted to create a contemporary retail experience for the cannabis consumer,” she says.

Each shop employs between 14 to 17 people, including a five-person management team that has a shop manager, assistant manager and three lead budtenders, she says.

Peterson meets monthly with each management team to discuss shop issues that center on how to improve the customer experience, Peterson says.

She says neither she nor Troy are cannabis experts; however, they’ve made sure to hire employees who are.

“Our employees are passionate about cannabis,” she says. “They have a great depth of knowledge.”

Peterson says the couple would like to open at least two more stores in Eastern Washington in the short-term future.

“As soon as the right deal comes along, we plan to expand,” she says. “It’s been a great adventure; there’s so much more to do.”