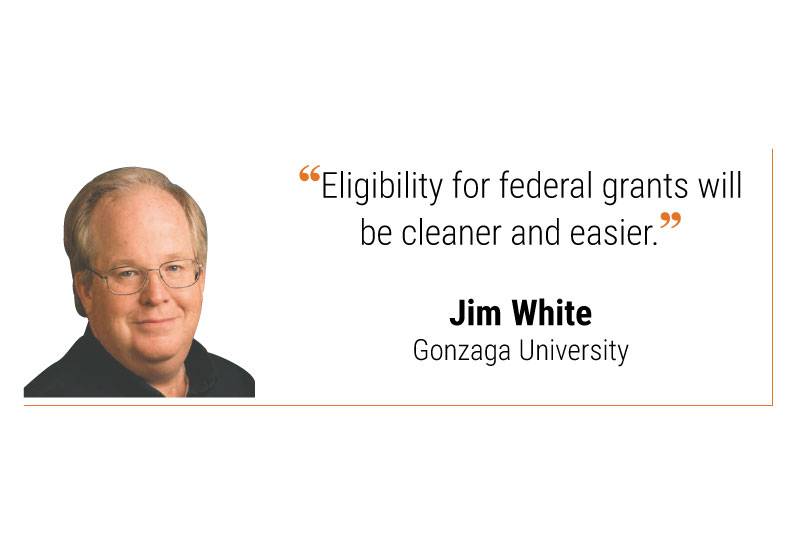 The changes, which were attached to the federal spending bill through the Consolidated Appropriations Act for 2021, will take effect in award year 2023-24.

“We’re a good two years out before most of those change,” says Jim White, dean of student financial services at Gonzaga University.

White contends the formula is used to ration federal grant dollars and isn’t a true representation of how much a family is expected to contribute to school expenses.

The formula will undergo some tweaks and will be renamed the Student Aid Index. That index will determine eligibility for all types of student aid authorized under Title IV of the Higher Education Act, including grant, work-study, and loan funds.

Over 194,000 students in Washington state received Title IV disbursements totaling nearly $1.9 billion during the 2019-2020 school year, according to the U.S. Department of Education.

According to the National Center for Education Statistics, 60% of undergraduate students at Eastern Washington University received financial aid in the 2018-2019 school year, the most recent year for which data is available. At Whitworth University, 94% of undergraduates received grant and scholarship aid. Of those, 30% received Pell Grants, and 56% took out federal student loans.

Pell Grants are federal subsidies that are based on the number of parents in the household and family income as a percentage of the federal poverty level, according to the National Association of Student Financial Aid Administrators.

With the upcoming changes, more students will qualify for the maximum Pell Grant award, as the eligibility requirements have been expanded. Under new legislation, maximum Pell Grant awards will go to low-income individuals whose adjusted gross income is 225% of the poverty level, and dependent children of a single parent whose adjusted gross income is below 225% of the poverty level.

Federal poverty guidelines are updated yearly, so it’s unclear what the breakdown will be in 2023, but in 2020, that meant a four-person family with a household income of around $60,000 and under would qualify for the maximum Pell grant award.

While it’s unknown what the breakdown will be in 2023-24 when the changes take effect, for a four-person family in 2020, that would mean those making $45,850 a year and under would qualify.

The provisions for qualifying students who experienced the death of a parent serving in the Armed Forces after Sept. 11, 2001, as well as students whose parent died in the line of duty as a public safety officer, have been retained, though an age cap of 33 has been established.

“Eligibility for federal grants will be cleaner and easier,” contends White.

Kandi Teeters, director of Eastern Washington University’s Financial Aid and Scholarship Office, says the details of the changes have yet to be determined by the U.S. Department of Education.

“Given the delayed implementation and national leadership changes, specifics are not likely for a while,” she says.

One of the biggest changes will be the system integrations between of the Department of Education and the Internal Revenue Service, which will allow families to transfer tax return data from one system to the other, instead of having to duplicate information on separate forms, contends White.

“The IRS has a lot of information about the applicants’ income and their parents’ income,” he says. “The exchange of data between the Department of Education and the IRS is going to be much more robust and really help the whole process.”

The income information will be as accurate as the tax records are at that moment, he adds.

With this shift, filling out and certifying the accuracy of FAFSA information will be more efficient, contends White.

“Currently, we make people who are low income prove that they are low-income multiple times, and the irony is the government already knows they’re pretty low income,” he says.

Another big change will be that male students won’t have to prove they’ve registered with the Selected Service System to qualify for the Pell Grant. Registration for the system, which is maintained in case of a military draft, had to be verified through the Social Security Administration and was often a time-consuming portion of the process, says White.

White, who has worked in financial aid services for about 35 years, says it’s unusual for such changes to occur in an annual federal spending bill, instead of through reauthorizing the Higher Education Act, though he notes the act hasn’t been amended for at least 12 years.

Some of the changes could be enacted sooner rather than later, though it’s unlikely changes such as integrating the Department of Education and the IRS will occur before the 2023-2024 school year, contends White.

Schools also will need to update their administrative computing systems to accommodate the changes and will have to retrain the staff on using the new systems once they’re active, he says.