Mixed-use, walkable district to have up to 20 buildings 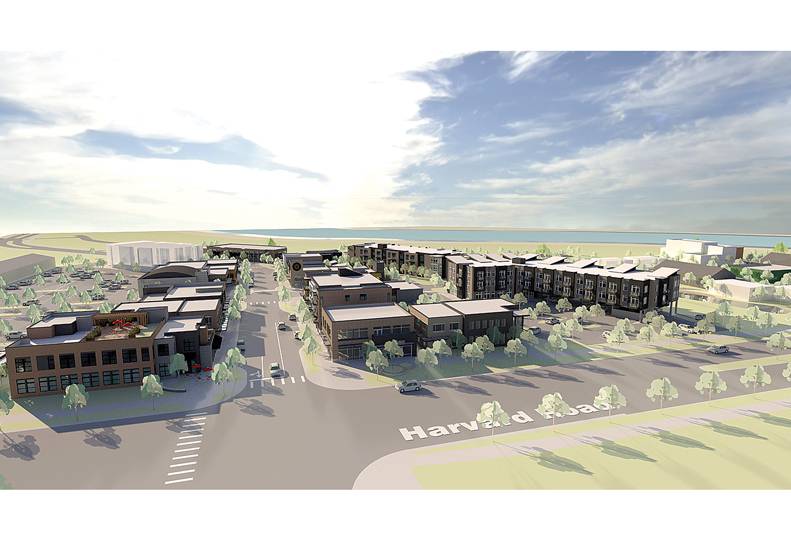 -GREENSONE CORP.
The planned development is to be called NoLL, short for North Liberty Lake, and will have an estimated total construction value of $50 million.

Greenstone Corp. is developing a new mixed-use town center called the NoLL, with its first building to be open fully as soon as next month in the River District.

Jim Frank, CEO of the Liberty Lake-based development company, says between 15 and 20 buildings will occupy the NoLL development when it’s completed, with about 100 residential units in mostly mixed-use buildings and an estimated 70,000 square feet of retail and restaurant space. The development is valued at about $50 million, Frank says.

Greenstone is acting as its own contractor on the development. Seattle architect Steve Cox, of Shoesmith Cox Architects PLLC, created the initial building designs for it as part of the River District master plan.

One building is partially open with an information center, café, attorney’s office, barber shop, and eyelash salon occupying space there, Frank says. The building will be open completely in the next few weeks, he adds.

The NoLL development site is on about 20 acres of land along both sides of Indiana Avenue, west of Harvard Road. The site is close to the Centennial Trail, south of the Spokane River and north of Interstate 90. Frank says the development will be constructed in multiple phases over five years.

Four buildings are currently under construction at the site. Construction of additional buildings are expected to start later this year. Frank says some of the buildings will have businesses occupying the ground floor with residential units on the second and third floors.

He says there will be two- and three-story residential buildings without ground-floor retail space located on the outside edge of the town center.

“It will create higher-density uses around the town center, and that puts people close to walking distance and services,” Frank contends. “The density around the businesses is a really important feature.”

He says NoLL, which stands for north Liberty Lake, has been planned for a decade as part of the River District development’s master plan.

Frank adds that the population in Liberty Lake has grown sufficiently enough to support such a business center.

“We’ve always had a plan to develop a town center element,” Frank says. “It just now got to the point where we feel there’s enough development in population to support it. It’s always been a part of the plan, but now is the right time to develop it.”

The center will focus on locally owned businesses, restaurants, food artisans, and service providers, and it will have a similar environment to Greenstone’s Kendall Yards neighborhood in Spokane’s West Central area, he says.

Part of the town center will focus on food artisans, including a brewery, restaurants, and a bakery.

“That’s something that’s not present in Kendall Yards,” Frank says.

Frank says the design of the town center will have varied architecture to give the appearance of having been developed over time.

“Rather than creating a shopping mall where the architecture is very consistent, we try to avoid that to do something more organic, and it doesn’t have a dominant architectural theme to it,” he says.

Frank says the town center will be important to the community and bring an urban, walkable business district to Liberty Lake.

“It will serve the needs of the community in a better way than having concentrated retail areas and shopping centers. We think there’s more value in these shopping districts than these big shopping malls,” he asserts.

•Scanned Media LLC, a design and marketing agency in Spokane, has purchased the Empire Office Furniture building complex located at 1401 N. Monroe, along with a residential property immediately west of the complex, at 1014 W. Sinto, for $1.9 million.

Noah Botnick, founder and co-owner of Scanned Media, says the company recently started tenant improvements to add two executive offices and a conference room on the second floor of the 14,000-square-foot building.

Scanned Media will relocate this spring to the Monroe Street site from the agency’s current location at 400 S. Jefferson, in Spokane, Botnick says.

He and his partner Chris Allred plan next to move their other jointly owned businesses, Spokane Salad Delivery LLC, and Bookoo Chef.

Bookoo Chef is a new business that will be a platform to connect clients to private chefs to cook at their homes. Botnik declines to comment further about the business, except that he expects to announce it officially next month.

Tenants for the complex’s two remaining leasable spaces of 2,500 square feet and 4,000 square feet haven’t been selected yet, Botnick says.

•Doorsey Inc., a real estate bidding platform co-founded by Spokane entrepreneur Jordan Allen, has expanded its service markets to include Atlanta; San Diego; Sacramento, California; and Austin, Texas, in addition to its listings in Spokane.

Allen claims that companywide, Doorsey has averaged 45 showings and nearly 30 bidders per listing. The startup has sold more than a dozen listings through its platform and has added about 100 listings in January, he adds.

“Those are huge numbers,” Allen asserts. “The results of the last few listings have been roughly 25% over list estimate.”