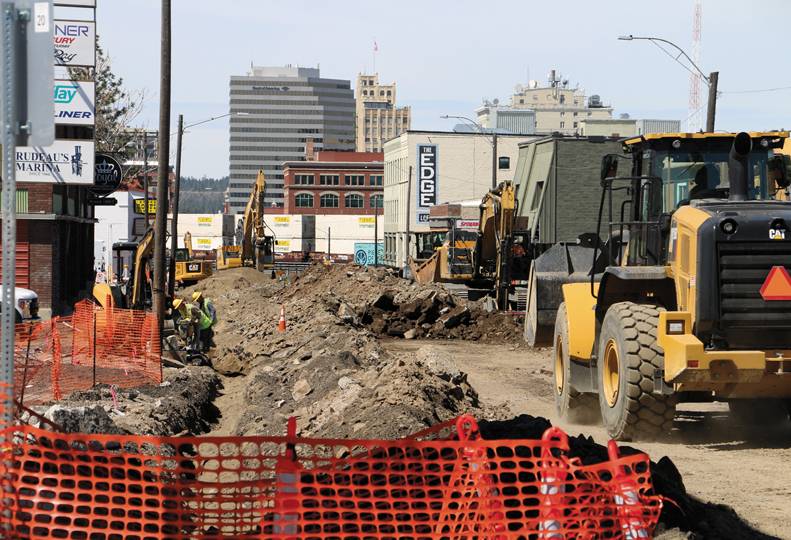 -Kevin Blocker
The city of Spokane has started work on the East Sprague Avenue overhaul. More street, bridge, and other projects could be funded soon.

As President Joe Biden continues to lobby the public and pursue bipartisan support for his $2.3-trillion plan to upgrade infrastructure nationwide, Spokane-area transportation and engineering officials say they’re waiting eagerly to see what the final plan will mean for the Inland Northwest.

Dubbed The American Jobs Plan, Biden is promoting it as an investment in the country that will “create millions of good jobs, rebuild our country’s infrastructure, and position the United States to out-compete China.” Near the end of April, U.S. Senate Republicans countered with a $568 billion infrastructure proposal to Biden’s plan released to the public the prior month.

“It’s exciting. There could be a lot of opportunity,” says Bill White, the Spokane-based northern transportation leader of Meridian, Idaho-based T-O Engineers Inc. “We just don’t know how much opportunity.”

Transportation officials contend a myriad of bridges and roadways around the U.S. are in dire need of repair and replacement. Though a dollar value hasn’t been assigned to the proposed work needed, local engineering firms in the transportation sector say they’re hopeful Washington state and the Inland Northwest secure sufficient federal funds for transportation projects here.

White says he’s observed through the years that infusions of federal money into states and municipalities have tended to come with “shovel ready” stipulations attached.

“They’re short infusions of dollars for projects that require shovels to be ready and in the ground within at least four months,” he says.

White hopes federal dollars will be appropriated with a less short-term approach as to be able to give architects, contractors, designers, engineers, and community members more time to have thoughtful approaches and discussions about what transportation projects need to be addressed.

“Your shot at the summer construction season is short right now,” White says. “April is gone. I think it would be ideal to give the consulting fields an opportunity to have time to be able to design projects without immediate deadline constraints and then begin construction next year.”

While Biden has expressed his desires for a more comprehensive infrastructure plan for the nation, it’s still anyone’s best guess as to what it will actually look like, White says.

Last month, the Washington state Legislature reached out to local municipalities asking them to begin formulating an infrastructure wish list for significant projects in their respective communities they’d like to see completed, he says.

“These opportunities could be huge,” he says.

Roger Flint is the chief operating officer of the Spokane office of Seattle-based engineering company Parametrix Inc. Founded in 1969 as Delta Engineering, the company has just under 500 employees in Washington, Idaho, Oregon, Utah, Nevada, and New Mexico. Parametrix acquired former Spokane-based Taylor Engineering Inc. in May 2016 which gave Parametrix its first permanent presence in the Inland Northwest since the 1970s.

Flint, who leads Parametrix’s staff of 30 in Spokane, also is currently the president of the Spokane Area Good Roads Association, a 118-year-old association that works as a staunch advocate for transportation improvement across Spokane County.

Flint says he doesn’t remember any other time in his career such high dollar amounts being bandied about for infrastructure projects.

“Even the Republican counter of a half-trillion-dollar range is a lot of money,” Flint says. “That’s significant at the federal level.”

Parametrix currently is providing engineering support to the Eastern Region office of the Washington state Department of Transportation on a general engineering and consulting contract and is the lead contractor on the North Spokane Corridor project, Flint says.

The engineering firm has worked on several roundabout, paving, and preservation and maintenance programs with the state’s department of transportation in Spokane County in recent years.

Flint says projects such as those could become more widespread here with the introduction of federal dollars.

Despite the effects of COVID-19 on traffic and the workforce, Flint says transportation projects are still largely being funded in the six states where Parametrix does business. More recently, he’s seen very large projects going out to bid.

“If you win (the bid), it’s great for you and you’re going to be busy,” he says. “If you lose, you might not have an opportunity at another batch of work for some time. There ends up being a little bit of the haves and the have-nots, in some respect.”

“Some of the jurisdictions are going through reductions in force and there’s retirements that are happening,” he says.

In many cases an entity, such as Washington’s transportation department, isn’t able to fill vacancies which in turn has them seeking out engineering companies such as Parametrix to help perform consulting work on projects.

“I hadn’t seen that as often as I’m seeing right now,” he says. “Some local jurisdictions really are leaning more on engineering firms to provide their public works support.”

Flint cited the cities of Cheney, Deer Park, and Liberty Lake as examples.

“It’s not that they don’t have some engineering staff, but they have limited staff,” he says.